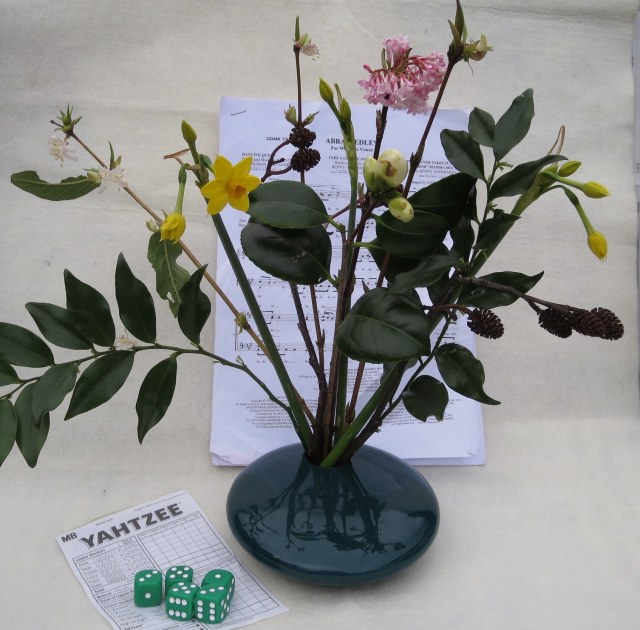 With more than half a dozen buds on Camellia japonica ‘Nobilissima’ swelling nicely and following the success of other shrubby buds opening in vases, I decided to take a chance and try the camellia in today’s vase. This sprig with its trio of buds was picked early on Saturday and the above photo was taken on Sunday afternoon, by which time the buds were distinctly fatter – so I am hopeful, although bizarrely one of the buds still on the plant has half-opened since its friends were picked. 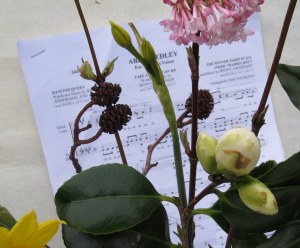 Knowing I was taking a chance when I cut the sprig, the Abba song ‘Take a Chance’ was already swirling around in my head (especially as the Abba Medley in the background of the photo is our barbershop group’s current pièce de résistance) so I thought I would take a further chance and enjoy a fully open flower of Viburnum bodnantense ‘Dawn’. All winter this has displayed a number of half-open buds, none of which have opened fully, but this last week with no frost for a fortnight or so the remaining buds have opened up for the first time ever. I hadn’t realised Dawn was so dependent on the weather, as this seems to be the case, and I have finally been able to fully appreciate her fragrance. 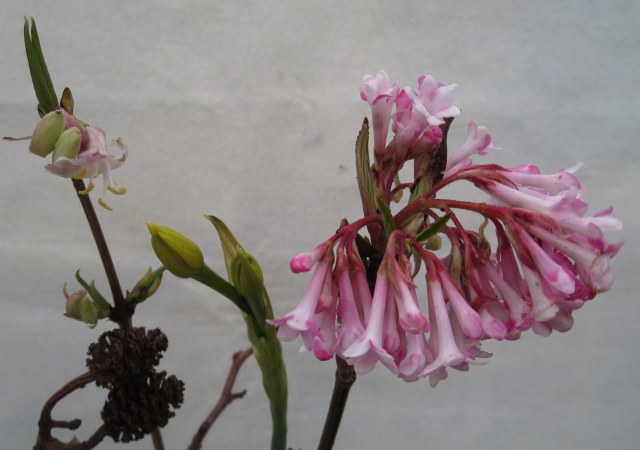 Keeping to a largely shrubby vase, stems of winter honeysuckle Lonicera standishii ‘Budapest’ were also included, seemingly appreciating the more clement weather too as there has been a new flush of blooms, this time with the hint of pink that had been absent previously. The fragrant flowers of sarcococca are over, but its green shiny leaves supported the camellia foliage and provided a good foil for the stems of Narcissus ‘Grand Soleil d’Or’, chance blooms from last year’s forced bulbs, which had been tucked away in the fruit cage, festering in their pot.

Alder catkins from last week’s dismantled vase were tucked in as an afterthought and, not wanting to clutter the strong straight stems, my sole ikebana vase used to display them. Joining the Abba Medley sheet music as a prop were dice and a score sheet from the simple but easily addictive game of Yahtzee, where coincidentally the randomly placed dice might have been best scored as a ‘chance’ (17 points, in this case.

I will update you on the progress of the camellia next week (and as requested, I can tell you that the twisted hazel catkins from last week’s vase are still looking good, albeit a little less yellow due to depositing pollen when they were transferred from the vase to a pot of leftovers on the kitchen window sill). In the meantime, what is bringing you pleasure in your Monday vase today? Do share it with us by leaving links in the usual way. 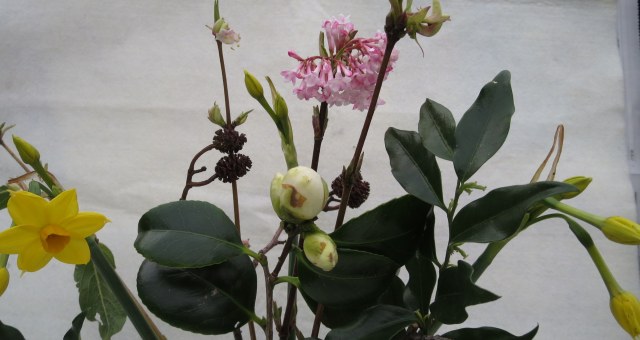