Although a day does not go past when I am not pursuing at least some loosely based plant or garden activity, on top of least one obligatory ramble in the garden of course (and not always possible when away from home although every opportunity to do so is taken), this last week has seen several hours of physical activity in the garden every single day, taking advantage of gaps in a generally rainy week – and what happy days they have been! The mornings and evenings are now noticeably lighter and, to top it all, yesterday our solar panel monitor recorded the sunniest day of the year so far, by quite a large margin.

So what have I been doing? Continuing on from my equally industrious day last Sunday, all but a few of the autumn sown plants I removed from the greenhouse have now been planted out. Looking at the forecast for this week and next and working intuitively, I judged that they would be settled in enough before any later frosts and could cope just as well outside than in the barely frost free greenhouse. Oriental poppy, perennial wallflower, foxglove, Californian poppy, lychnis and cerinthe have been planted out, just leaving dianthus and Sweet William waiting on the sidelines, freeing up considerable space in the greenhouses and filling some gaps in the borders.

At the side of the house, on the way to the chickens, the pots of herbs that 2 or 3 years ago had been in set into the bed there have, almost on a whim, been lifted out and placed against the fence where they are looking quite presentable but will look better when the soil still clinging to their sides have been washed off. They have been joined by a large chimney pot and cowl which had been elsewhere in the garden.

Lattice pots empty of snowdrops have systematically been removed from the special snowdrop border, the decision having been made to remove the non-showers from my list and not to try and replace those lost – particularly as some (Jaquennata, Chedworth and Ketton for example) have been replaced more than once. Existing snowdrops which have not yet formed a healthy clump have been repotted from the lattice pots into Avon Bulbs’ tall snowdrop pots and replaced in the bed and, following recent advice from Avon Bulbs to sink potted snowdrops into the ground, my new acquisitions have been also been planted this way. Established clumps will be taken out of their lattice pots in due course and planted directly in the bed.

The hellebores in this bed (only white or green varieties) always grow taller than those in the woodland edge border, and yet they have got a tall holly hedge at their backs. Don’t you just love this ‘Harvington Double Lime’? 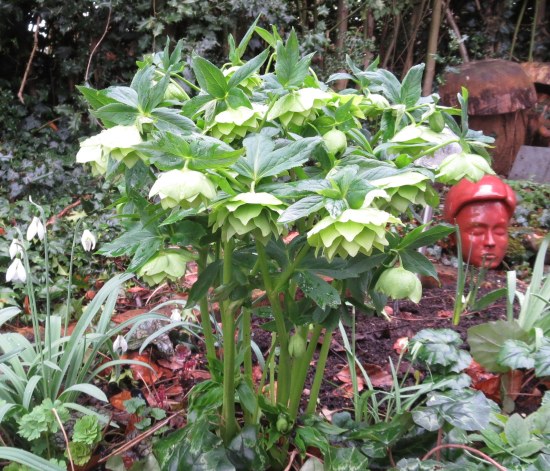 Still thinking about snowdrops, I have continued to divide the larger clumps of common snowdrops in the woodland edge border, where they really do give the appearance of an almost-wall-to-wall white and green carpet: 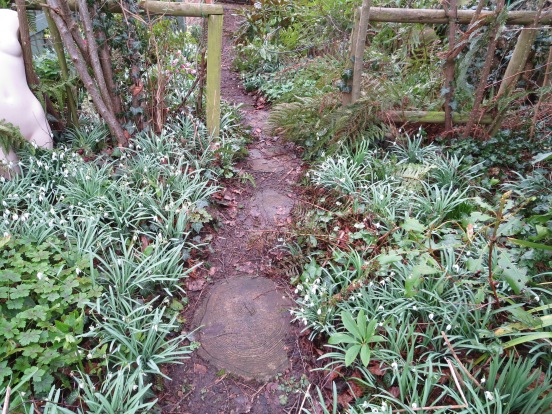 Now free of my 2016 plant purchase embargo, I received my order of heuchera from Plantagogo last week to top up the bronze heuchera bed under the Acer griseum, but a larger order from Claire Austin has not yet arrived but will keep me busy this coming week.

Months of indecision about underplanting in the rose garden had finally been resolved, and divisions of my Uncinia rubra were planted this week under the ‘Blush Noisette’ around the edges, covered by a membrane and then slate chippings. Dividing the Uncinia, even with a sharp knife, was not an easy task (well, I suppose it wasn’t the sharpest kitchen knife)! The two larger central beds will be planted with Hakonechloa aureola, due with my dahlia order from Peter Nyssen

On the wetter days seed sowing has continued apace with, as a quick totting up has informed me, 94 individual indoor sowings having been made since the end of August last year, only a handful being second sowings. More perennials have been included since previously, partly with a view to sales at my open garden and partly with the help of gifts of saved seeds from fellow bloggers. I am not yet 100% confident with saving seeds myself, collecting only from cosmos, my Purple Pimpernel sweet pea, echinops and some specific aquilegia last year, oh and at the suggestion of Chloris, from a dahlia, to see what might be produced. If I had realised seed of Antirrhinum ‘Twinny White’ would not be available for love nor money this season I would have certainly tried to save seed from them – but some plants have overwintered so I might get a second chance although, on reflection, I believe they were F1 hybrids so would not therefore come true to the original…hey ho!

Rambling in and around the garden are happy days indeed.

Like Loading...
This entry was posted in Gardening, Gardens and tagged early spring tasks in the garden, hellebores, heuchera, snowdrops. Bookmark the permalink.