Time On My Hands

At last I have had time on my hands to get out in the garden and get on with all those seasonal jobs, managing at least a couple of hours most afternoons this week – and what a difference it has made! Not only have all those lingering bulbs been planted, but the pansy, viola and bedding plants which were were due to overplant many of the bulbs in pots have been planted out too, as above, immediately clearing space in the greenhouse to home any tender plants that have not already made it inside.

Some tender plants are being cosseted in situ, this year using lambswool that came as insulating packaging for a Michelin star meal-at-home that the Golfer and I treated ourselves to for an anniversary back in September (the prepared parts of the meal were individually packaged ready for reheating or cooking). The wool is literally straight off the sheeps’ backs, lightly compressed into a multi-neutral coloured layer around 2″ thick, and very soft and tactile. Easily cut, it readily forms a collar to wrap around tender plants, where it can be supplemented on top by compost, bark or straw; I have no idea whether it will rot down over winter, but it is a great way of recycling and, having read about the low price farmers have been receiving for their fleeces recently, is another market for this end-product.

The dahlias were lifted this week, and are now drying out in the greenhouse; once excess soil can be brushed them I will pack them away in dry compost recycled from pots and stored in large boxes in the greenhouse till early next year when they will be potted up. I have wondered whether to cut out the box storage stage and store them directly in pots…

Next to this working greenhouse, in the fruit cage the autumn fruiting raspberries are still producing, only an ounce or two at a time, but it all adds up. As I double crop these raspberries, the larger part of their yield comes in June or July, and smaller autumn yield comes in dribs and drabs from September onwards – but this year both yields have been later than usual.

One belated task was emptying compost from the HotBin, which supposedly produces compost in just a few months but as I don’t use it to full capacity it hadn’t seemed worth emptying before. I use it primarily for kitchen waste as it is far closer to the house than the main compost heaps, and certainly in the warmer months it seems to work well, but like wormeries the composting processing is very much slower in winter. To access the finished compost you remove a front section and take out the final product – mine was well-blessed with eggshell fragments! Once the front section is replaced, the remaining contents will drop down to fill the void. 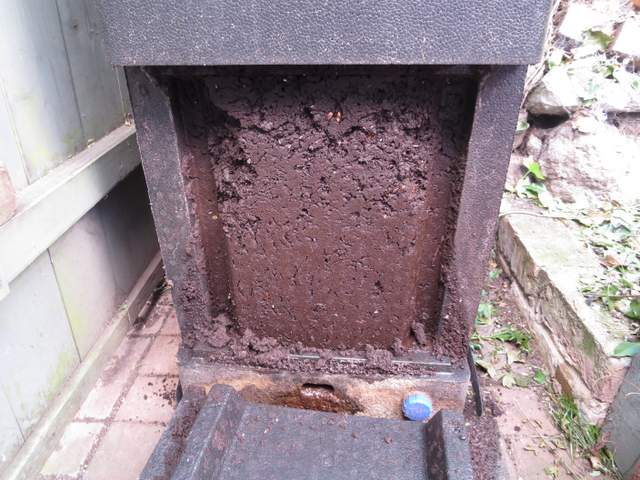 Despite my relative lack of height, even I have had to duck under some of the clematis growing up the supports of the Rambling Rector’s arbour, but that was remedied today. Although Group 3 clematis should be pruned in early spring, specialists Thorncroft Clematis advise it is acceptable to tidy them up in autumn or early winter, cutting them down to about waist height and tying them in to prevent damage. The resultant greenery takes up an awful lot of green bin space but at least all those near the house have been dealt with and crammed into our overflowing bin and that of our tiny-garden neighbour – the ones on the clematis colonnade will have to wait! I wonder if our Six on Saturday host Jon the Propagator has been able to get any of his outstanding jobs done since last week – why not pop over to his log to have a look? 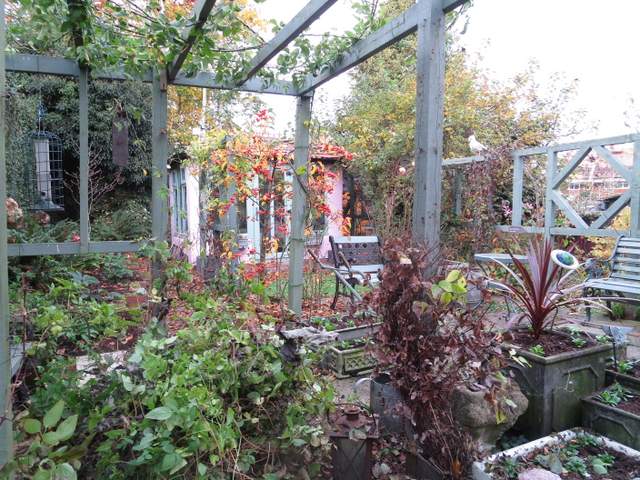 Like Loading...
This entry was posted in Autumn, composting, dahlias, Gardening, Gardens, greenhouse, pruning, Six on Saturday. Bookmark the permalink.

14 Responses to Time On My Hands