In a Vase on Monday: a Chicken and Egg Situation 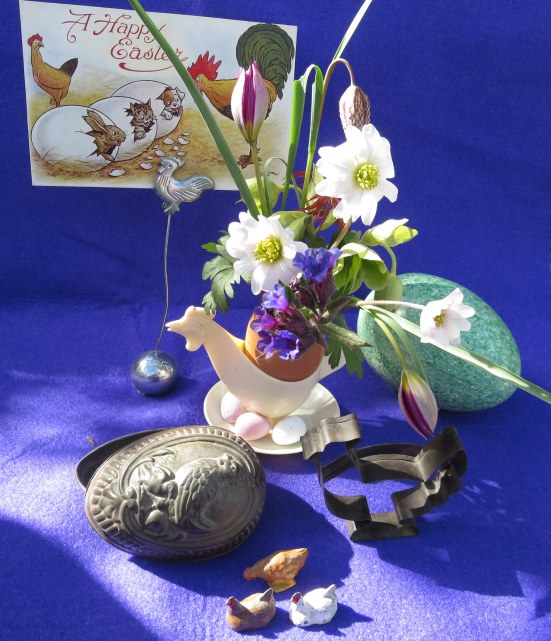 With Easter approaching and recalling some pretty egg shaped vases Chloris used at this time last year I had been searching on eBay for one for myself, and although a number were available in the US postage costs made such purchases impractical. In the absence of anything suitable in the UK I decided to improvise with real eggs from our own chickens and some of my collection of chicken egg cups. I was beaten to it, however, by Frog End Dweller and her delightful sugar almond coloured eggs and egg cups last week – do have a look if you missed them.

Not completely deterred, I continued with my ideas but made sure there was a rather different emphasis, particularly with the chosen blooms. Instead of the earliest spring blooms I chose some Anemone blanda which I am trying to naturalise in the hedge border which is visible from the house and, heading further down the garden, a stem of the just-in-bloom fritillary, two heads of species tulip ‘Persian Pearl’ which were showing thier first hint of colour, bright blue blooms of Pulmonaria longifolia and a sprig of Hellebore foetidus. The bright emerging foliage of a tiny Acer ‘Katsura’ caught my eye on the return journey and a small side shoot was snipped to join the blooms. 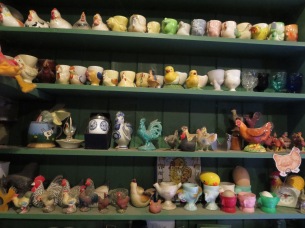 I had already carefully removed the top section of one of our eggs and decanted the contents for later use, but deliberated for some time before choosing which egg cup to place it in, having perhaps too many to choose from… Nevertheless, it’s still possible this one, an example made in the late 1950s by Sonja Plastics in former East Germany,  might have used before. Using scraps of florist’s foam inside the empty shell, the stems could be kept relatively long, thus creating a bigger display than first envisaged – perhaps about 9″ (23cms). 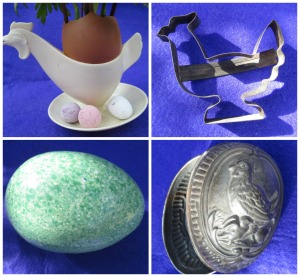 Props were easy, considering my large collection of vintage chicken-themed collectables (kitsch/junk/dust-collectors?), beginning with the mini chocolate eggs around the base of the egg cup. These were joined by 3 tiny lead chickens, a tin Easter egg mould, biscuit cutter, an egg in the typical mottled colours of the resin based plastic which replaced Bakelite in the 1930s, and an Easter greetings postcard dating from 1923 held in a modern card-holder.

Spring is creeping into many northern hemisphere gardens, gradually increasing the quantity and variety of material available for Monday vases. Christina has been showcasing tulips for a number of weeks and I hope to be joining her with more than just a few species tulips soon, so next week who knows…? In the meantime, what will you be putting in your vases this Easter Monday? Please share them by leaving usual links. 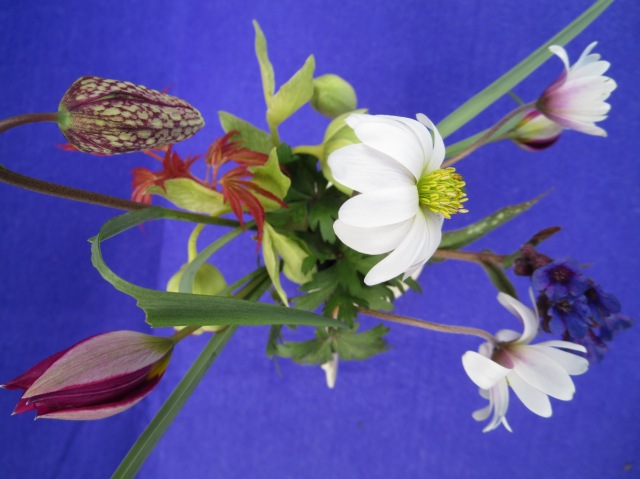 Like Loading...
This entry was posted in Gardening, Gardens, In a Vase on Monday and tagged Easter, flowers in a vase, kitchenalia, vintage egg cups. Bookmark the permalink.

77 Responses to In a Vase on Monday: a Chicken and Egg Situation