In a Vase on Monday: Promises 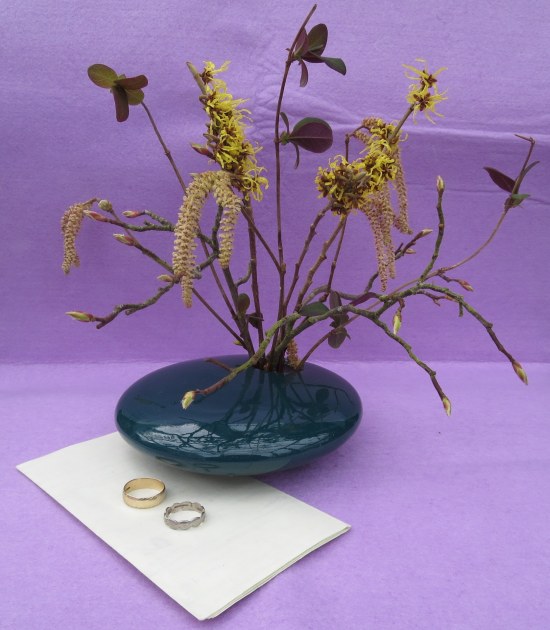 I had no preconceptions whatsoever about the contents of today’s vase, but knew it would be all too easy to pick from the selection of crocus, Tête à Tete, snowdrops or hellebores that continue to provide both colour and interest in the garden. Wanting to avoid the obvious, I ignored these – and instead snipped three short side stems from what tends to be the last of the witch hazels to flower, Hamamelis ‘Arnold Promise’.

This set the ball rolling for other promises – rugged twigs of Amelanchier lamarkii with this year’s buds already in evidence, preparing to burst open and reveal the fresh pink of new leaves, bi-coloured foliage of an unlabelled honeysuckle, burgundy undersides contrasting attractively with the green uppers, and dangling catkins of hazel paving the way for another season’s hazelnuts for the squirrel to plunder. For some reason, perhaps because they tend to hang much higher than eye level,  I rarely notice catkins on the various self-seeded hazels in the garden, having always cut them from the its twisted cousin Corylus avellana ‘Contorta’ instead. Stems of cornus were also cut but not used as the other twigs ably held their own without it.

The vase was a cheap impulse purchase from eBay, found when I was looking for something else, and which in retrospect realised was in the style of a Japanese ‘ikebana’ vase, a word I had not come across before IAVOM. Ikebana is a style of Japanese flower arranging, one possible translation of which is ‘giving life to flowers’, which I think many of us feel we do with our vases on Monday although rarely in Ikebana style. All I know about it is what I have just read on Wikipedia, but in essence it emphasises shape,

line and form, based on the 3 points of a scalene triangle which may reflect either heaven/earth/man or sun/moon/earth, and it has a profound spiritual element to it as well. Carried out in silence, Ikebana is believed to inspire beauty in all art forms and a closeness to nature which provides relaxation for the mind, body, and soul. Apologies to all those reading this who have experience of arranging in true ikebana style and know far more about it – mine has just been plonked in an ikebana vase although with very much a similar spiritual element.

The props? The promise of new growth and future seasons provided by the various twigs is supplemented by the promises made by the Golfer and I when we were married nearly 20 years ago (seems barely one or two…), represented by our wedding rings and marriage certificate. Coincidentally, Younger Daughter who is getting married at the end of April popped in over the weekend and we had a very interesting conversation about marriage in which she outlined how her opinions had been changed and shaped by various relationships over the years, both hers and other people’s, and the promises involved are especially important to her. She has asked me to do a reading at the wedding and the impromptu discussion will add meat to the bones of the sonnet I am writing for the occasion (I do like my challenges!). 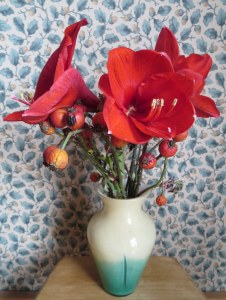 I know most of you will be interested in the progress of the sleeping lion from last week’s vase – he is roaring ferociously, but silently, as you can see! Not everyone can bring themselves to cut a hippeastrum like this, I know, but on past experience the stem will flower just as well as when attached to the bulb and can be enjoyed at closer quarters so I no longer have any qualms about cutting.

What will you cut for today’s vase? Will you have any qualms? Do share your vase and your thoughts by leaving links to and from this post as usual. 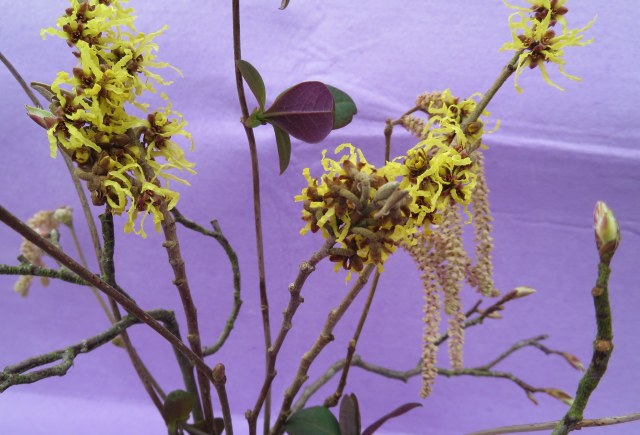 Like Loading...
This entry was posted in Gardening, Gardens, In a Vase on Monday and tagged flowers in a vase, ikebana, sonnet. Bookmark the permalink.

82 Responses to In a Vase on Monday: Promises