In a Vase on Monday: Also-Rans

Today’s vase contains blooms I have not used in a vase this year, and in some cases never; not necessarily because they were not worthy of inclusion, more that they were overlooked for one reason or another…also-rans.

It was the pale pink self-seeded achillea that began this train of thought, possibly the progeny of some achillea plugs I used in pots a couple of yours ago – or maybe a wild form, brought in on the wind. I have to confess to being totally underwhelmed by achillea, and have never successfully grown any of the bright varieties seen in other people’s borders; I again have some free plugs this year and they are also pale and wishy-washy. Low growing too, they are never going to make an impact in a border. Joining them are the pretty blue flowers of caryopteris with their intriguing and equally blue stamens, Salvia ‘Phyllis Fancy’ and S ‘Nachtlvinder’, fresh seedheads of annual scabious, a spent heuchera flower spike and a couple of stems of Sedum ‘Xenon’. 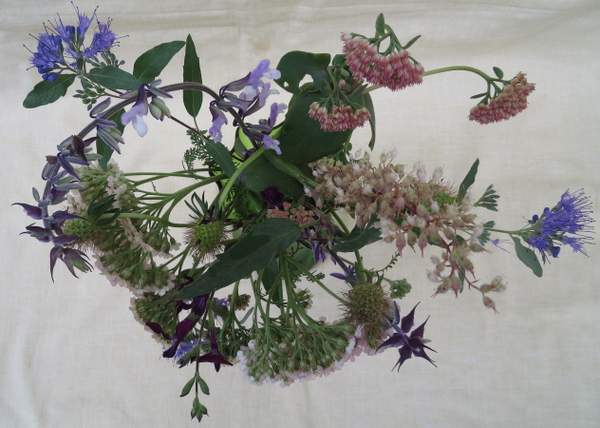 It made a refreshing change to have paler and softer coloured blooms in the vase, instead of the solid and brighter colours of dahlias and sunflowers and the like, and there were several vases I could have chosen to house them, but my final choice was one of a pair of green glass vases with a fluted pie crust rim.

Today’s prop is a ‘silver medal’, awarded to me in one of the many athletic competitions I took part in as an older adult. The Golfer and I met at our local athletic club – he was a jumper and at the top of his game for his age group, whereas I was a sprinter, and although faster than an average female of my age very much an also-ran in terms of women who were competitive members of an athletic club. We competed in our ages groups at local, regional and national level, and at regional events you could still be awarded a medal if less than three people entered, as long as you reached a certain standard. No doubt this medal was awarded on one of those occasions!

In a Vase on Monday is not competitive in any way and there are no medals to be won, although occasionally there may be a prize draw, usually on annual anniversaries, the seventh of which is coming up in November. We pick flowers or other material from our gardens purely for the pleasure it brings ourselves, with the added bonus that it also gives pleasure to those we share the vase with and brings us into contact with a lovely bunch of people too – long may it flourish! If you would like to share a vase with us, arranged or plonked, please leave links to and from this post.

Like Loading...
This entry was posted in Gardening, Gardens, herbaceous perennials, In a Vase on Monday and tagged flowers in a vase. Bookmark the permalink.

38 Responses to In a Vase on Monday: Also-Rans