In a Vase on Monday: Glow Davy, Glow

I was waiting for more than just one bloom on Dahlia ‘David Howard’ before I used it in a vase: there is a small handful today so here he is and definitely glowing in a marmaladey sort of way. He is such a distinctive dahlia and after putting off adding him to my collection for a season or two I finally succumbed and know the decision will not be regretted.

Being a very manly sort of dahlia, he definitely did not want any froth or fuss to accompany him, but choosing more severe companions was not as easy as you might think. The hart’s tongue fern Asplenium scolopendrium certainly fitted the bill, and a dried piece of twisted hazel Corylus avellana ‘Contorta’ found under the tree wouldn’t go amiss either, but the final element was harder to choose. A few rejects later, a sprig of unripe crab apples, Malus ‘Evereste’, joined the others in a shallow dish, supported by a metal frog which was hidden under a layer of washed pebbles. Backing up the ensemble was a vintage Davy lamp, a safety lamp invented by Sir Humphrey Davy in 1815 for use in flammable atmospheres like coal mines.

I always look forward to creating my Monday vase, and to the pleasure I know it will bring being able to view it at close quarters during the coming week; I look forward as well to the banter and community spirit of IAVOM, as many of you pop in to comment or with vases of your own. Please do join us and leave links to and from this post if you have a vase to share. 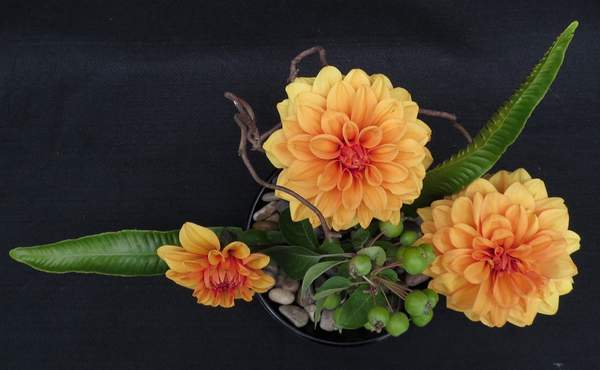 Like Loading...
This entry was posted in Gardening, Gardens, In a Vase on Monday and tagged dahlias, flowers in a vase. Bookmark the permalink.

61 Responses to In a Vase on Monday: Glow Davy, Glow