Six Years of In a Vase on Monday: Wotcher Shortie! 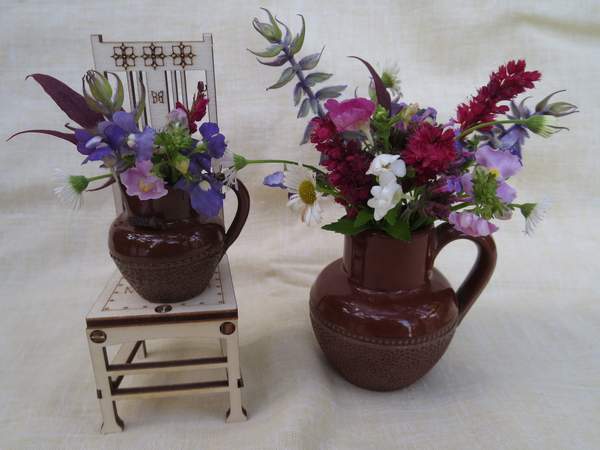 Welcome to the sixth anniversary of In a Vase on Monday! Approximately 312 vases later, the meme seems to be as popular as ever amongst both vase makers and vase viewers, irreversably changing both the viewpoints and habits of many of us, for example “I could never bring myself to cut the flowers in my garden” or “I am rubbish at arranging flowers”. Even “I don’t have any vases” or “I don’t have any flowers” just don’t cut it these days either, as IAVOM requires neither a vase nor flowers as we have discovered whilst expanding our horizons over the years. 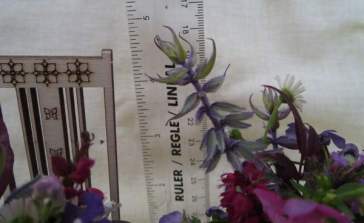 For most anniversaries I have thrown down a challenge, to encourage us to try something which may be out of our comfort zone, and this year I suggested readers produce a miniature arrangement, perhaps no more than 6″ (15cms) in each dimension. I planned to set the bar really low (the height of the vase that is!), but the result depends on which part we consider is ‘the vase’ and which is ‘the prop’: the overall height of all components, however, comes out at a little under 5″. 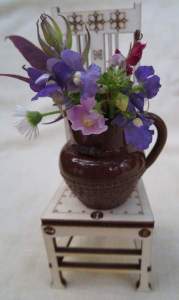 In the matching little jugs, both vintage sample pieces from the fairly local Bretby Pottery, are snippets of Salvia ‘Phyllis Fancy’, Persicaria ‘Red Dragon’, Erigeron karvinskianus, Verbena bonariensis, remnants of annual bedding plant Nemesia ‘Poetry Mixed’ and new foliage of Nandina domestica ‘Obsessed’. Initially I planned to use just the smaller of the two jugs, which without the little chair is a mere 2.5″, but when I came to trim the material that had been cut I decided to use the larger jug too as the overall effect was too pleasing to my eye not to do so. The chair is a copy of a Charles Rennie Mackintosh chair from The Hill House in Glasgow, slotted together from a little plywood ‘kit’ that caught my eye some time ago and which has been begging for a prop slot in IAVOM ever since – so why has it made it today?

Let’s look at the title of the post, ‘Wotcher Shortie!’: ‘wotcher’ is UK slang of 19th century Cockney derivation or earlier, a friendly greeting and contraction of ‘what cheer’ or possibly “what are you up to?”. Friendly banter between the Golfer and myself might, when referring to a chair, instead say ‘wotcher’, and for those bloggers who have met me in person it would come as no surprise that he often calls me Shortie (as a term of endearment of course!)…so for a miniature vase on a little chair, ‘Wotcher Shortie!’ seemed appropriate.

I do hope many of you will rise to today’s small challenge, and any new contributors would be especially welcome. To everyone who has supported the meme in different ways over the years, some right from the start, I would like to extend a great big thank you. Created to discipline myself into regularly cutting material from the garden and bringing the pleasure of the garden inside, it did just that and much much more, becoming an institution in itself, and a very supportive institution at that…long may it continue!

As a thank you to contributors of vases on this 6th anniversary I have a giveaway which sadly I forgot to photograph – some biodegradable floral foam: ‘OASIS® Bio Floral Foam Maxlife which has been shown by ASTM D5511 to biodegrade 51.5% within 365 days in biologically active landfill conditions’. Offering it in this draw is not intended to suggest I am recommending its use but having heard about it from Susie I thought it was worth a try.

To remind you of some of the last year’s vases, here are my favourites from each of the last 12 months:

Like Loading...
This entry was posted in Gardening, Gardens, In a Vase on Monday and tagged flowers in a vase, miniature vase of flowers. Bookmark the permalink.

60 Responses to Six Years of In a Vase on Monday: Wotcher Shortie!