In a Vase on Monday: Goodbye To All That

My, how I dithered yesterday when deciding on the contents of today’s vase – champing at the bit to use the first of the ‘big’ tulips that were now in bud but still wanting to celebrate the last throes of  the gorgeous early spring colour that we have been

enjoying recently… It was the latter that won this tightly fought duel, but I felt a little like the Roman god Janus, the ancient god of beginnings, endings and transitions (amongst other things), looking both forward and back. Looking at previous posts, this dithering seems to be regular occurrence, especially at these transitional times in the year, so shouldn’t really come as any great surprise!

From the Coop I cut the last of the Narcissus ‘Grand Soleil d’Or’ which have been flowering cheerily for weeks, unaffected by the vagaries of the weather, and keeping the stems tall I picked out similarly lanky pruned stems of Cornus sanguinea ‘Midwinter Fire’ from a selection saved from the previous day’s seasonal pruning of the three cornus in the shrub border. They have positively glowed this last winter, warming the cold dark days and leaving me reluctant to carry out the essential spring maintenance which will ensure a repeat performance next year. But it’s done now and the prunings have been severally dealt with – some used as cuttings (which I have not tried before), some plonked in a bucket of water for future use in vases such as today’s and the remainder green-binned.

All the stems were popped into my first ever vase, a gift in the 1970s, a sharply incised cylindrical pottery creation with a denim blue matt glazed finish. For many years I have  associated this vase with daffodils and tulips (always separately, never together), for which it is eminently suitable. The result is taller than most of my IAVOM offerings, almost 24″ in height, but with my new Improvised Vase Backdrop Contraption it was still a doddle to photograph. I have been meaning to ‘design’ something to make staging my vases easier for ages, and when I came to talk to the Golfer about it I realised there was very simple option which would do the trick perfectly – just 2 pieces of MDF taped together to make a hinge, over which can be draped whatever fabric is being used as a backdrop.

The photograph shows it in situ in same location I usually use, one of the benches near the house (a bench that is always grubby and often wet), which usually needs a barrier to protect the fabric. The backdrop was previously limited by the height of the backrest over which the fabric would be draped, so this new 24 x 24″ backdrop is a big improvement. In due course it will have a simple ‘stay’ at the back to allow it to be freestanding, as well as having wing nuts to hold the backing fabric in place, but it functions perfectly adequately as it is and took about 5 minutes to make. Rather than my ragbag collection of coloured felt, most of which will now be too small to use, I shall seek out a collection of other fabrics which will  have the advantage of not attracting spicks and specks of general garden detritus, as well as being washable. 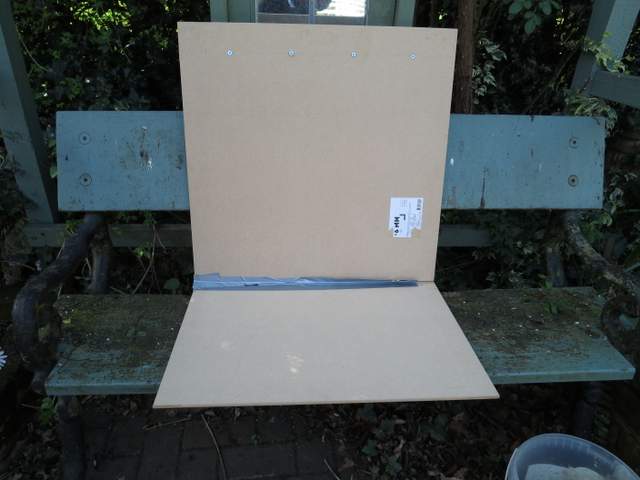 So, perhaps it will be tulips next week – in April, rather than the tail end of March. In the meantime, no doubt other IAVOM contributors will have some tulips to share but whether it is tulips or twigs, narcissi or dried grasses, grand lilies or humble daisies, there will invariably be something in our gardens that we can cut and pop into a vase so take the plunge if you have not already done so and enhance your life in ways you never thought possible. If you would like to share the pleasure with us just leave the usual links to and from this post.

Like Loading...
This entry was posted in Gardening, Gardens, In a Vase on Monday and tagged Cornus sanguinea 'Midwinter Fire', flowers in a vase, Narcissus 'Grand Soleil d'Or'. Bookmark the permalink.

49 Responses to In a Vase on Monday: Goodbye To All That