Ina Vase on Monday: The First Cut is the Sweetest 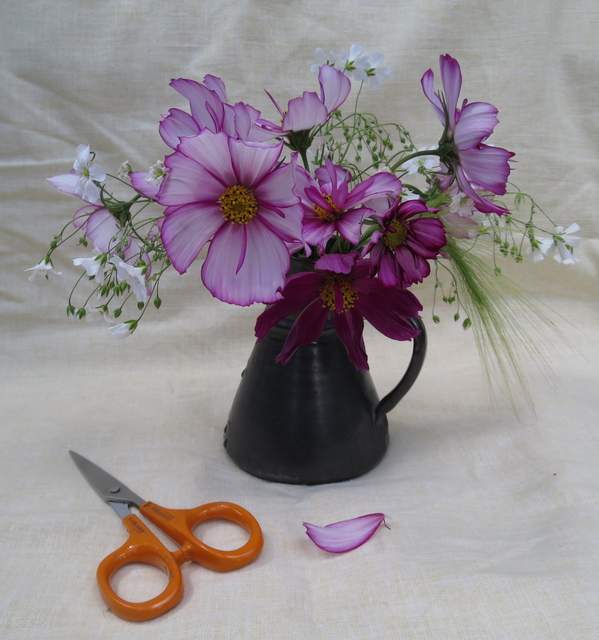 I have been cutting Winter Sunshine sweet peas for over a month, by far the earliest of my seed sown annuals to flower, and no doubt the sweetest too. Next to bloom was cosmos, and although there are many other blooms elsewhere I decided that today’s vase would be the product solely of the cutting beds, their first cut.

Pickings are still lean but everything is bulking up promisingly so I cut a few stems of Cosmos ‘Fizzy Rose Picotee’ (and one of Click Cranberries) and of Gypsophila ‘Covent Garden White’. I was alerted to the latter by Chloris of The Blooming Garden so it is new to me and I am hoping it will grow taller than 6 inches or so it has attained so far. That’s about as tall as the cosmos is just now though, and I know that will grow considerably more in due course. Adding a hint of green and an apology is a stem of Squirrel Tail grass Hordeum jubatum to make up for inadvertently mixing up my animal tails a few weeks ago, when I included Bunny Tail grass Lagurus ovatus in a vase but credited it to the bushy-tailed animal instead (thanks to Anna of Green Tapestry for gently pointing this out).

The blooms are popped into a little Prinknash jug, and accompanied by my ’embroidery scissors’ which I religiously use purely for sewing tasks although it is some years since I accomplished any embroidery. As a young adult, the scissors we used for any sewing tasks were those we grew up calling ‘rat scissors’, having come home with my father who was a pathologist…

The sweet peas are still coming thick and fast and I am having to pick them almost daily, often giving them away to neighbours or any friend I might be seeing that day – when I cut these yesterday they were on their way to brighten up my place of voluntary work. I have grown four different shades of this Winter Sunshine variety but this year I have found myself rather wishing they sold them in mixed packets as each posy I pick is the same. The four shades blend nicely together, but it made me realise how much more attractive a mixed posy of sweet peas can be.

Little or large, lean or abundant, picking anything from your garden to pop in a vase or other container will bring you guaranteed pleasure. Do brighten your week by doing so, and share the result with us if you would like by leaving links in the usual way.

76 Responses to Ina Vase on Monday: The First Cut is the Sweetest