In a Vase on Monday: Winnie and Friends

Yesterday, when I picked these blooms and prepared the vase, was a lovely day,  a gentle and warm sort of day, a reminder of summer’s pleasures amidst the first signs of autumn. With a long list of on-going projects, the Golfer and I were able to spend most of the day in the garden on our allotted tasks, taking advantage of the September sunshine. 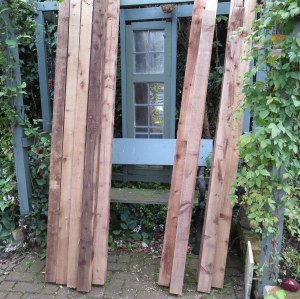 Unusually, the vase ended up as my final task of the day, resulting in a last-minute dilemma of a location to photograph it, the usual spot being hijacked by a number of lengths of timber and one of our  cast iron garden chairs pressed into service instead. The star of the vase is Dahlia ‘Jowey Winnie’ and she is accompanied by a number of her dahlia friends: Glow, Bishop of Leicester, Happy Single Juliet and  Karma Serena, supported by Persicaria ‘Jo and Guido’ and Miscanthus ‘Ferner Osten’ .

The dahlias still provide plenty of pickings, although the blooms are generally smaller and the plants a little wayward from lack of staking and the effects of rain; having bloomed continuously for four months they have made a wonderful contribution to the cutting beds and to numerous vases and posies…all for less than £2 per tuber.

I fiddled with the length of the stems whilst trying various ways of arranging the blooms in the chunky rectangular glass vase, in the end using small pebbles to half-fill the vase and support the stems till I was satisfied, before filling it to the top. I need to remember that the water will also need topping up more often because of the space taken up by the pebbles.

Accompanying the vase, today’s prop is the complete set of Winnie-the-Pooh books – ‘Winnie-the-Pooh’, ‘The House at Pooh Corner’, ‘Now We Are Six’ and ‘When We Were Very Young’ – an integral part of my childhood. I still like dipping into them and often recite excerpts from the poems in the latter two books. Even as a teenager my friends and I still appreciated the books and used to match each other with the various characters: I was considered the Christopher Robin of the group, full of down-to-earth common sense, which I suppose is no bad thing!

Will you be conjuring up your own pleasure from a vase this week? You don’t need to include props alongside your weekly vases, but we find it does add a little extra sparkle to our Mondays so do consider it if it is not something you are in the habit of doing. See you soon!

Like Loading...
This entry was posted in Gardening, Gardens, In a Vase on Monday and tagged dahlias, Winnie-the-Pooh. Bookmark the permalink.

60 Responses to In a Vase on Monday: Winnie and Friends