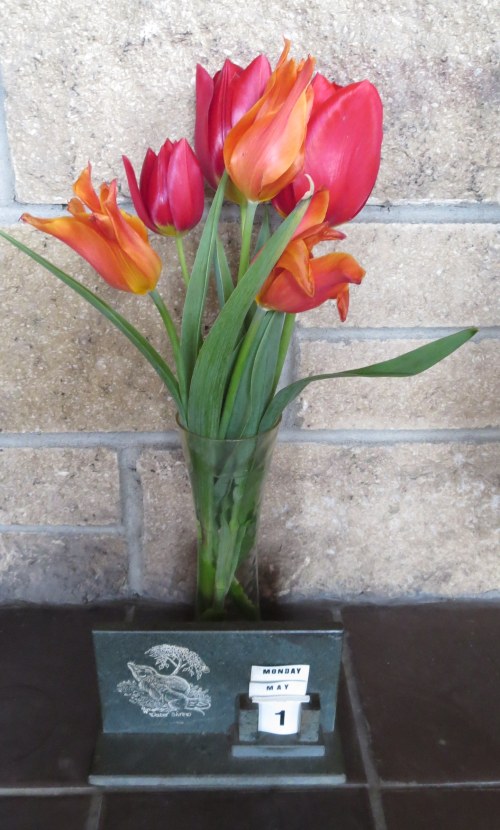 These tulips were picked very early on Friday morning, wrapped tightly in damp newspaper, and travelled 400+ miles with us to my Mum’s – not quite as far as, however, as the lily of the valley Younger Sister had parcelled up and sent to her in the post the day before! 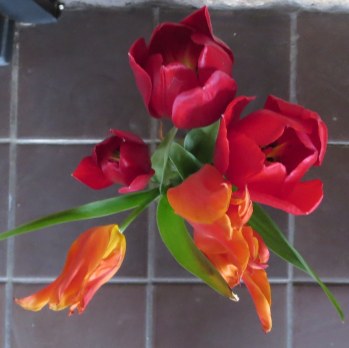 The time travelling tulips have been borrowed for today’s vase – three distinctive lily-flowered Ballerina, a double stemmed tulip which I think must be Red Georgette and a further red but unidentified tulip from a mixed batch. The former are last autumn’s planting and are in a pot, the multi headed one is probably in its second season in the ground, whilst the third has been in a large tub for perhaps 4 or 5 years; increasingly tulips seem to be surviving longer in the garden and I shall replant all last autumn’s potted ones into the ground when they have finished flowering. Despite the time travelling, the tulips have lasted well, aided no doubt by the rather cooler temperatures – they would no doubt have been fully open within an hour or two at home! 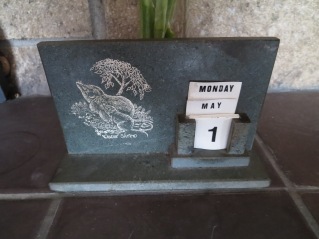 An easy prop was the perpetual calendar readily at hand on the mantlepiece below which the vase had been placed; constructed from slate, this has been around for many a year, possibly dating to the 60s or 70s. Such a simple concept, but requiring a degree of diligence to change the date every day, far more so than the already tough task of turning a calendar’s page every month – woe betide those with a birthday in the first few days!

Northern hemisphere gardeners are increasingly finder a wider choice of blooms to choose from for their Monday vases but, wherever they live, longstanding IAVOM participants know that they will always be able to find something from their gardens to pick and pop in a vase, regardless of the season, unless of course they are unable to get out into their gardens because of the weather, as was the case for many US bloggers in recent months. So, what will it be today? Do share it with us on your blog by leaving links to and from this post in the usual way – see you soon! 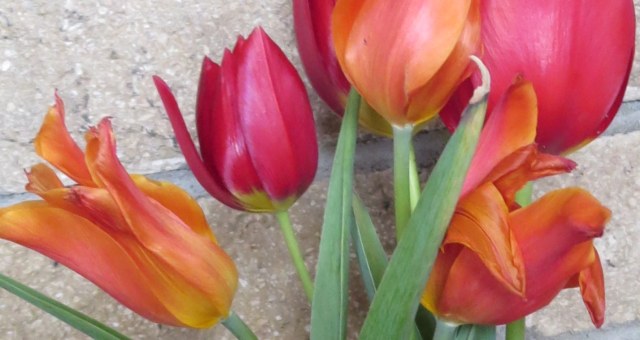 Like Loading...
This entry was posted in Gardening, Gardens, In a Vase on Monday and tagged flowers in a vase, tulips. Bookmark the permalink.