In a Vase on Monday: Spring Uprising

This was one of the weeks when I knew in advance what would be appearing in my Monday vase – in the case of the hyacinths that is, as scent from these two blooms of Blue Star have been pervading my nostrils for the last few days, the prepared bulbs having been planted inside in a pot in the middle of December. No more unsuccessful attempts at growing them in hyacinth vases for me!

I am no fan of ‘normal’ size daffodils in my garden, but when given them already growing in a pot I would never throw them away after flowering, instead replanting them in an out of the way place like the back of the woodland edge border or under the apple trees. Last year various small clumps were rationalised into fewer large clumps instead and and I was amazed to find several buds opening a few days ago, in advance even of the usually earlier ‘Tete-a-Tete’ and immediately putting themselves forward as candidates for the vase. A few early blooms of  Leucojum aestivum from the snowdrop border joined them, plus sprigs of Sarcococca confusa for greenery and additional fragrance.

Reconnaissance in various parts of the house eventually brought me to my chosen vase, another Caithness Glass one (not a car boot or charity one this time but a wedding present) which picks out the green and yellow of the daffodils perfectly. It is far too early on the 1st of February to suggest that winter has now given way to spring, but let’s enjoy any early signs of it whether it be spring bulbs, lighter mornings, increased bird activity or the following: 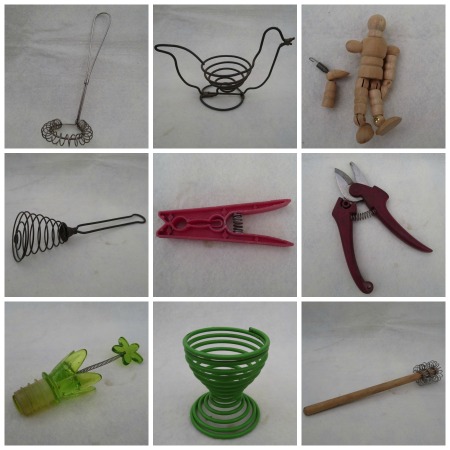 (left to right, top to bottom: milk frother, vintage egg cup, bendy man awaiting arm reconstruction, vintage whisk, clothes peg, secateurs, bottle stopper, egg cup, another milk frother) None, however, can compare with the tactility of the mini ‘slinky’ which was chosen for the main prop, having been bought on impulse at Tate Liverpool on our recent visit. I never had a full-size version as a child so have not had the pleasure of seeing one ‘slink’ downstairs – and sadly our existing stairs are not conducive to slinking so I am still deprived of the experience…

What fun will you have today, creating your vase or collecting props to accompany it? Please share your vase and the joy of its creation in the usual way by leaving links to and from this post – I look forward to seeing them!

Like Loading...
This entry was posted in Gardening, Gardens, In a Vase on Monday and tagged Slinky. Bookmark the permalink.

67 Responses to In a Vase on Monday: Spring Uprising