In a Vase on Monday: Moody Blues

Changing the clocks on Saturday night nearly caught me out yesterday afternoon, realising almost too late that the light was already fading and I hadn’t yet prepared and photographed my vase for today. The distraction of an impromptu visit from Younger Daughter and discussion of her weddings plans could also be blamed but I would rather lay the blame on the clock.

Fortunately I already knew the basis of the vase contents, having been enamoured with the gorgeous moody blue spikes of Salvia ‘Amistad’ for several weeks and rejoicing still over the continued flowering of sweet pea ‘Purple Pimpernel’ and an unknown plain dark one from a mixed pack of blue annual seeds. Having cut back Salvia horminum ‘Oxford Blue’ some weeks ago there were a number of fresh shoots with those lovely blue bracts available to pick to join the other choices. Oxford Blue and Purple Pimpernel have been star performers this year, and I have already sown seeds of the former and a pink equivalent, Pink  Sundae, for next year. I have always called this plant by its common name ‘clary sage’, having known it as such since my first proper forays into gardening as a teenager, and this is the name I shall stick with.

To join these blooms I picked stems of Callicarpa bodinieri ‘Profusion’, now covered in the tiny purple berries that seem almost unreal and which never appeared when the shrub was growing in a pot but which now smother it in, well, profusion… Persicaria ‘Red Dragon’, a moody beast if ever there was one, was the only foliage picked whilst stems of Sedum ‘Purple Emperor’ and Verbena bonariensis were rejected after picking because they veered too much on the side of purple. However, a number of potential vases were also rejected because they were just too ‘blue’ and with time rapidly running out a plain Prinknash Pottery vase was selected instead and the blooms that made the cut quickly positioned. 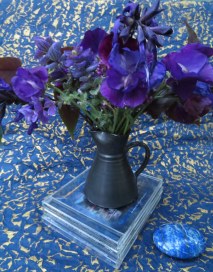 The background was a piece of blue and gold handmade paper (reminiscent of a starry sky) bought some years ago for a project but not used, and other props were a lapiz lazuli palmstone (called such because it fits in your palm) in a similar colour and three CDs of blues music – my favourite Blues Band album ‘Scratching On My Screen’, ‘The Very Best of the Moody Blues’ (favourite track ‘Question’) and a ‘Blues Legends’ compilation CD featuring a range of blues performers… so excuse me while I just go and put one of these on to play… That’s better – should have had it playing from the start to create the appropriate ambience…

I love the intense colours of this vase, which in reality are a deeper and moodier almost royal purple colour rather than the blues suggested by the photographs, but I am sorry it has been a rush to put it together as it deserved more attention than it got. Nevertheless it got there in time and was photographed before outdoor pictures became impossible, allowing it to make its debut as this week’s Vase on Monday. What will make the final cut for your vase today? Just leave links to and from this post so we can share in your Monday pleasure – and start thinking ahead to a fortnight’s time when it will be the second anniversary of the meme and I will be offering a giveaway draw to celebrate the occasion.

64 Responses to In a Vase on Monday: Moody Blues