In a Vase on Monday: Remembering My Grannie 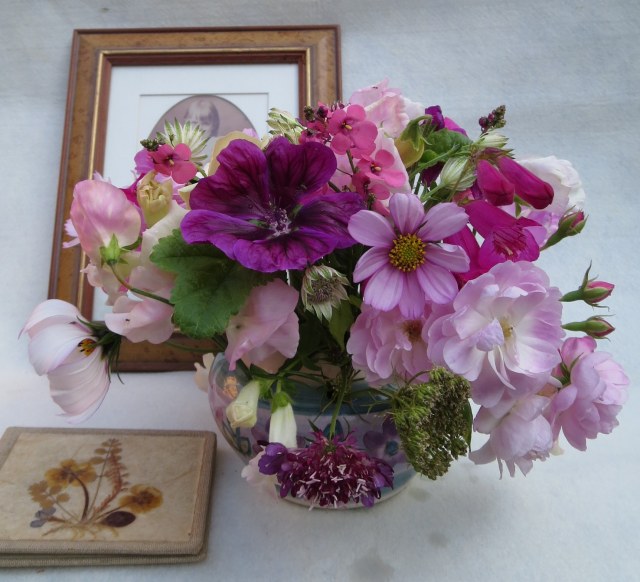 I had no thoughts about a title for today’s vase whilst I was picking the blooms but all sorts of associations can crop up as the process gets underway, sometimes evident in the props some of us add to our vases.

The colchicums having hijacked last week’s slot I guessed I would still make a beeline for the ‘pinks’ in the garden, hard though it may be to ignore the in-your-face colour of the dahlias and rudbeckias, but you would be forgiven for thinking that the result could not possibly be an October vase. I look at it now, with the pale and slightly delicate looking blooms, and see a vase that at first glance could have been posted in May or June and indeed I was surprised at the selection available.

Picked first was a tiny sprig of white stock, sown in June and waiting along with wallflowers to be planted out – it has surprised itself as well as me by flowering so early! Joining it were a handful of Tall Spencer sweet peas from a free packet, Cosmos ‘Candy Stripe’, Antirrhinum ‘Twinny Pink’, Californian Poppy ‘Ivory Castle’ and spent heads of Ammi visnaga. Perennials picked to accompany the annuals were Malva ‘Mystic Merlin’ (sown from seed this year), Astrantia ‘Buckland with their hint-of-pink middles, Scabious ‘Raspberry Sorbet’, Diascia ‘Hopleys’, Penstemon ‘Just Jayne’, the first spikes of a pale pink Hesperantha that the label has gone astray from and a couple of sprigs of rose ‘Blush Noisette’. I have been thrilled with the Californian poppies this year, the first time I have grown them, and hope that this one and ‘Red Chief’ seed themselves around; next year they will be joined by ‘Purple Gleam’. I used the antirrhinum in a vase in early July, but the plants in the cutting bed succumbed to what may have been ‘rust’ soon after; elsewhere they continued to flourish and have been flowering since the middle of June – another must for next year. 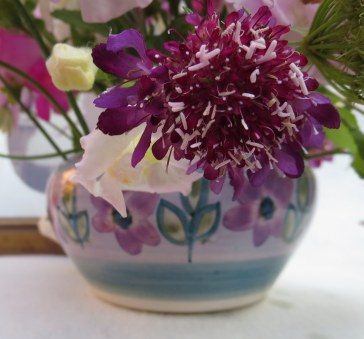 The flowers were placed in a posy bowl (another acquisition from the boot sale lady who was downsizing), a product of Tantallon Ceramics which was a pottery started in 1962 in North Berwick, a small seaside town about 25 miles east of Edinburgh. This is where memories of my grandmother came in as she had taken me to Tantallon Castle, a little along the coast, on more than one occasion. I visited several castles and historic places with her as a child but, for a reason I cannot remember, without my siblings, although I do recall talking about writing a book about castles! How old was I? Somewhere between 8 and 12 perhaps? At a younger age she taught me about wild flowers whilst on walks down to the River Tyne from her home in Haltwhistle and this may well have sparked my early interest in plants. The delicacy of today’s blooms are a little reminiscent of wild flowers, and I also seem to associate the soft turquoise colour on the vase with her as well. 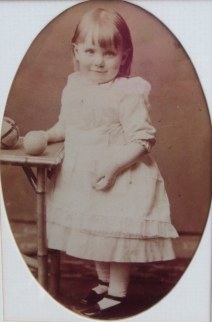 Props linked to my Grannie and all these memories became a must once the thought process had begun, but I soon realised that I had no photographs of her as I remembered her. What I did have though, was a copy of this photograph of her as a child, perhaps taken when she no more than 4 or 5 which would have been in the mid 1890s; this photograph unexpectedly appeared from a stash of my Mum’s 100 years later and surprised us all by being the spitting image of Younger Daughter at a similar age! Family resemblances are a strange thing, and I often look at this picture now and think it is indeed YD and not my Grannie. The little book is a photo album my Grannie gave me in 1967, most appropriately with pressed wild flowers on the front.

There is such joy to be had from our Monday vases on all sorts of unexpected levels. If you haven’t yet joined this very addictive Monday routine do consider doing so, posting a vase or container with material from your garden or foraged nearby and leaving links to and from this post so we can share in your pleasure. It doesn’t have to be a weekly post, and it’s not about formal arrangements unless that’s what you want to do – picking and plonking is fine by us. If you don’t want to create your own Vase on Monday then please just continue to enjoy everyone else’s vase instead. 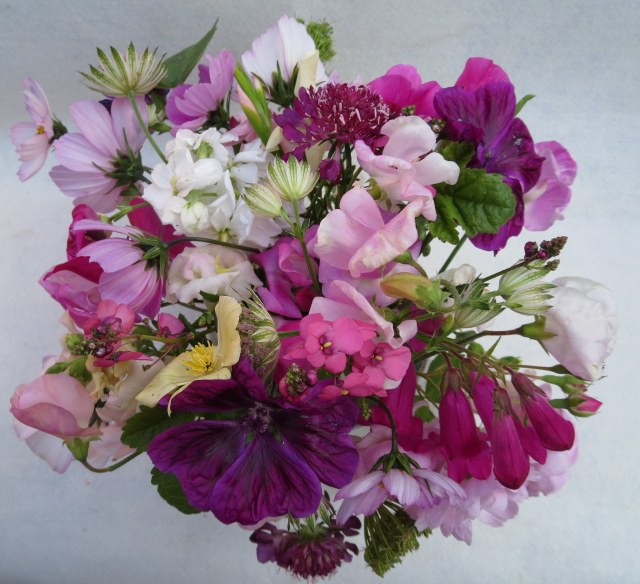 Like Loading...
This entry was posted in Gardening, Gardens, In a Vase on Monday, Visiting gardens & days out and tagged flowers in a vase, Tantallon Ceramics. Bookmark the permalink.

74 Responses to In a Vase on Monday: Remembering My Grannie