In a Vase on Monday: Gilding Not Required 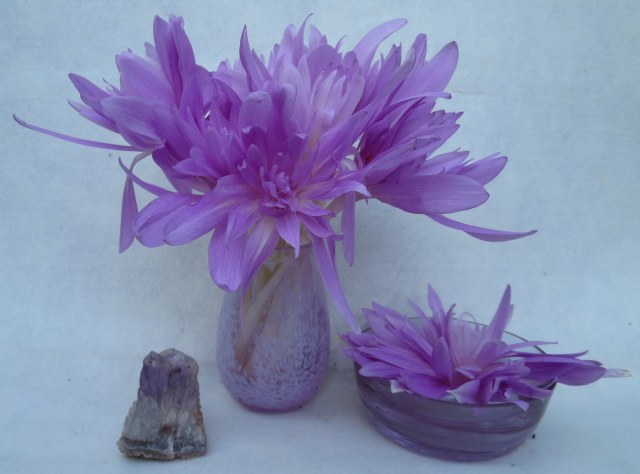 When there are still plenty of blooms available in the garden it can be difficult to resist the temptation to stuff a vase full of them, as I did last week. Sometimes, though, the simplicity of a beautiful flower stands out amidst the colour and variety of its compatriots and demands my full attention. Looking at this vase of Colchicum ‘Water Lily’ now, I am glad that restraint was exercised this week.

Having focused on the bright and beautiful of late summer in recent weeks, I had already determined to seek out softer colours, picking accordingly for a vase to grace the table when friends came for lunch during the week – sweet peas, astrantia, diascia, scabious, clary, geranium, fuchsia and Ammi visnaga. I considered the colchicum then, but was unsure how they would last in a vase. However, our lunch guests brought a reciprocal posy with them which included colchicum from their garden; three days later it still looks fresh, tucked in a vase with sedum and amaranthus. Yes, worth picking. 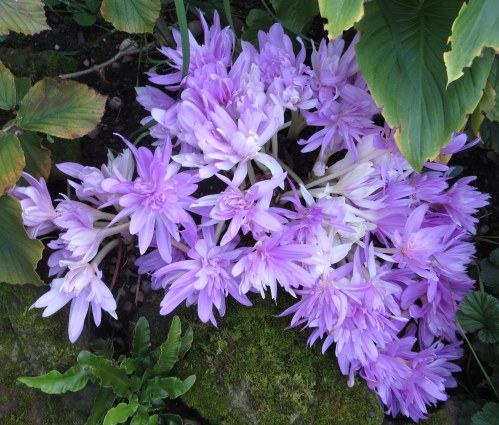 My colchicum are a double variety, ‘Water Lily’, and were planted near the stream between 5 and 10 years ago. Peter Nyssen sell the bulbs in 5s and there is a smaller clump in a different spot, so I guess this clump originally consisted of 3 bulbs. They flower in late September/October, the flower stems emerging pale and deathly white like blanched chicory, the petals quite quickly taking on their pink or violet colour (I don’t know how quickly as they always seem to be one or the other, with no clear in-between stage) with leaves following many months later when the flowers have long since gone. Interestingly, the stems often seem to be twisted: 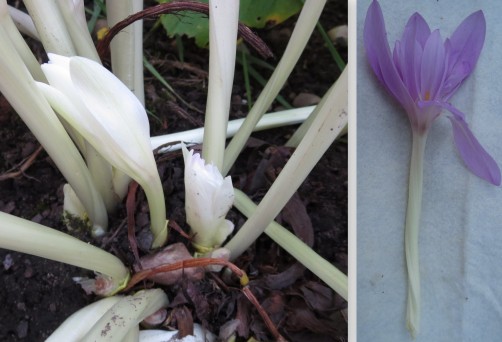 Nine blooms were picked and placed simply in one of several Caithness Glass vases I have in this colourway, the perfectly plain and subtle receptacle for the blowsy exuberance of the blooms. Having sometimes regretted the almost over-the-topness of this variety because of the bedraggled petticoat look they take on after exposure to rain, in fine and dry weather they are indeed something to behold and all regrets are gone. Their showiness was enhanced by an additional decapitated bloom, floating in yet another Caithness piece, accompanied by a small piece of raw amethyst. Amethyst occurs in various shades of purple, according to the mineral content of the rock it is formed in and the degree of heat or radiation it is subjected to; irradiated amethyst is transformed into brown smokey quartz, whereas iron impurities and excessive heat changes it to the yellow of citrine. Amethyst is believed to be a powerful and protective crystal, calming the mind, opening intuition and enhancing psychic awareness.

Simplicity was indeed the key today and somehow the vase also appears to be deeply spiritual and calming, the amethyst being a serendipitous choice. What will you choose for your vase today – simplicity or abundance? I look forward to finding out – just leave links to and from this post as usual.

Like Loading...
This entry was posted in bulbs, corms and tubers, Gardening, Gardens, In a Vase on Monday and tagged amethyst, Colchicum 'Water Lily', flowers in a vase. Bookmark the permalink.

65 Responses to In a Vase on Monday: Gilding Not Required