In a Vase on Monday: Red, Red Wine

I make no apology for the simplicity of today’s vase – it would have been so easy to cram a vase with more dahlias, sunflowers and several different rudbeckia, but Rudbeckia ‘Cherry Brandy’ is just so gorgeous at the moment that I felt it a deserved a vase of its own. Sown at the end of February this has been flowering since the end of July and is still getting better and better with the flowering stems more upright than they were in their first stages of growth – definitely one to be recommended and grown again.

Joining it is my old favourite, Persicaria ‘Red Dragon’, which would have won the prize for longevity in a recent vase where it still looked as fresh after a week as it did when it was first picked. I avoid picking the softer stems and as with most vase material I conditioned them in boiling water for about 20-30 seconds before use. I may well have focussed on red blooms and foliage in that recent vase but the combination of these rudbeckia with the distinctively marked foliage of the persicaria is a marriage made in heaven, a union that deserves to be celebrated with red, red wine (sorry Anna…). Kate of Barn House Garden featured ‘Red Dragon’ and other persicarias in a post last week and aptly describes it as ‘sprawling like a bar room brawler’ – it certainly does this in the bar room of my woodland edge border where it can sprawl amongst other foliage to its heart’s content and mine too.

The vase used was a Tutbury Crystal rose bowl (car boot) with glass pebbles successfully holding the stems in place, whilst the contents and title made for the inevitable prop of a glass of the aforesaid beverage in an Edinburgh Crystal wine glass (wedding present). I chanced taking the photograph inside this week, placed on a tall oak plant stand against a wall that would avoid reflections, previous attempts against the tiled fire surround having been aborted.

Thanks for all your kind comments last week and apologies for not being able to reply to them although hopefully I managed to catch up on everybody’s vases. I look forward to seeing and reading about what you have found in your gardens this week or foraged locally to pop in vase – just leave the usual links to and from this post so we can share in your pleasure. 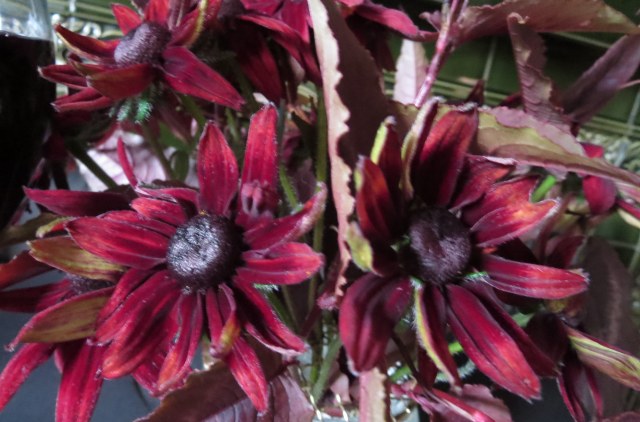 Like Loading...
This entry was posted in Gardening, Gardens, In a Vase on Monday and tagged flowers in a vase, Persicaria 'Red Dragon', Rudbeckia 'Cherry Brandy'. Bookmark the permalink.

92 Responses to In a Vase on Monday: Red, Red Wine