In a Vase on Monday: a Little Spring Garden 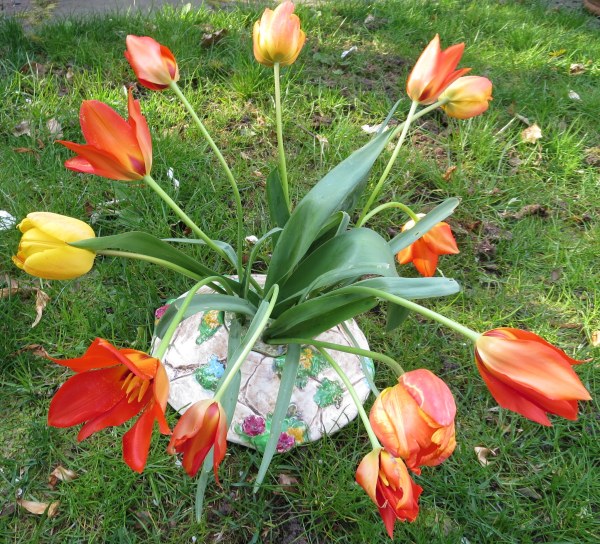 Another last minute change of plan brought about this little spring garden in a vase instead of the fiery theme I had in mind when I picked the tulips, a mix of ‘Beauty of Apeldoorn’ (‘yellow flushing mandarin red’) and Tulipa vvedenskyi ‘Henry Hudson’ (‘reddish orange, small yellow base’). The former were in a pot last year and replanted in a cutting bed and the latter are settled in the bold borders – they were to be accompanied by a stem of Euphorbia griffithii ‘Fireglow’ and other similarly fiery additions, but seeking the right vase pointed me instead in the direction of the unusual kitsch container that is being shared with you today. 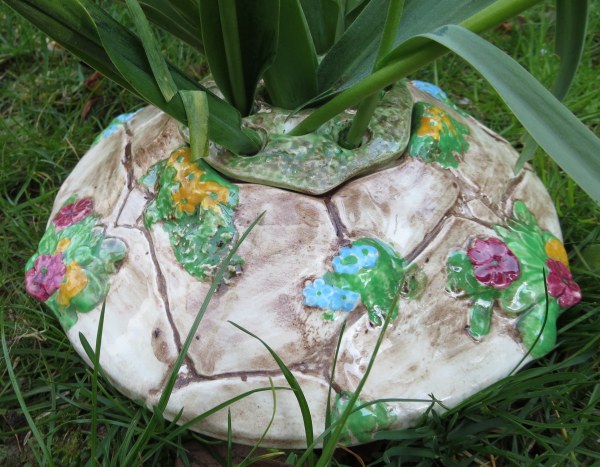 This unusual vase was found on eBay when I was searching for something else, probably a flower arranger’s frog, and snapped up for around £10 or so. I always envisaged using it for narcissi but unfortunately their stems were too thick for the holes in the insert, and even with the tulips I had to ensure leaf joints were fully removed from some of the stems before they would fit. As you can see, the central piece lifts out to allow the vase to be filled, and I suppose you could use a frog in the base as well if need be. To try and keep the stems straight I followed Wellywoman‘s tip in her book ‘The Cut Flower Patch’, wrapping the stems in newspaper, securing them with a rubber band and leaving them in water for a few hours before using them – although I did cut a few extra after the change of plan so they didn’t get this conditioning treatment!

Having acquired all sorts of new vases since this meme started it was good to be able to use one that hadn’t yet seen the light of day, so hurrah for the change of plan! I wonder what you will decide to pick from your garden today and what container they will appear in? Do share your choice with us, whether plonking or formally arranging – but more importantly just enjoy picking them and bringing them inside to give you pleasure during the week. If you are willing to share, please leave a link to this post from yours, and include a link back to your post in a comment on this one. Everyone who joins in always looks forward to Mondays now! 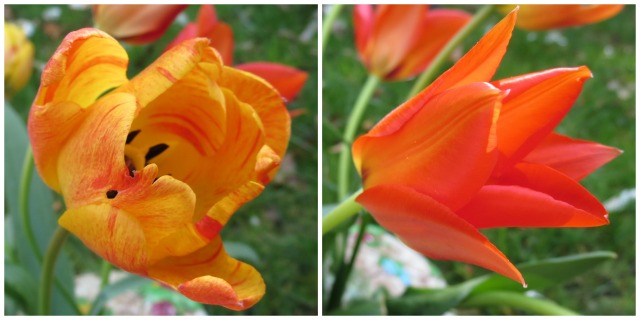 Like Loading...
This entry was posted in Being Creative, Gardening, Gardens, In a Vase on Monday and tagged flowers in a vase, Tulip 'Beauty of Apeldoorn', Tulipa vvedenskyi 'Henry Hudson'. Bookmark the permalink.

68 Responses to In a Vase on Monday: a Little Spring Garden