In a Vase on Monday: Spring Snowflakes 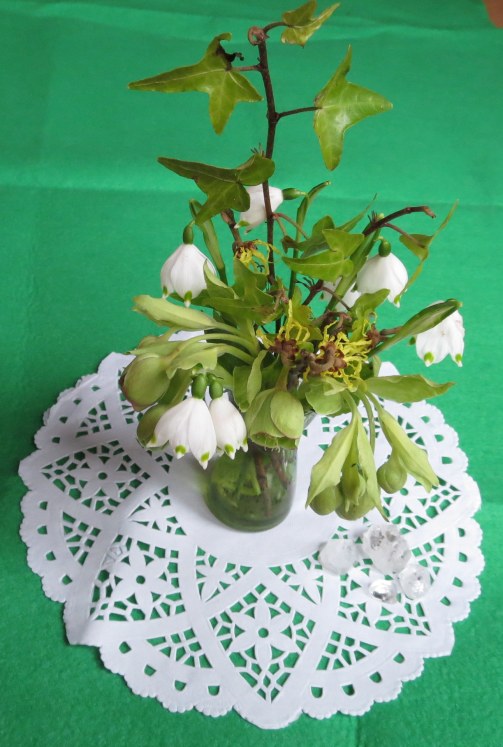 It seems ages since a Monday morning last came round that had no pre-conceived ideas about a vase – opportunities just seemed to present themselves so it was quite refreshing to scour the garden with fresh eyes. Including Leucojum vernum, undeservedly the poor summer snowflake relation of the more well known snowdrop, was soon top of the agenda as I have been watching it push up its bright green spikes for weeks alongside the duller green foliage of the snowdrops – then all of a sudden it was flowering, my attention having wandered to the competing beauties of the snowdrops, both specials and ordinaries. Chloris mentioned the leucojum in her garden yesterday, quite rightly suggesting these ones are much prettier than their later L aestivum cousins which seem to be all leaf and little flower.

The stems of the leucojum are relatively short, so its companions needed to be equally short – no problem: I could spare three short side shoots of Hamamelis ‘Arnold Promise’ and the upper part of a stem of Hellebore foetidus to join it in this tiny green crocus vase, more petite even than last week’s purple version. 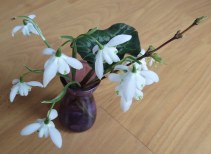 The iris in the latter vase sadly lasted only a couple of days, but the lonicera is still fine and dandy, the buds opening up nicely over the week, and the cyclamen leaf looks as fresh as ever, both without any conditioning. They have been joined by a little posy of Galanthus ‘Flore Pleno’, the pretty double version of the common snowdrop.

There has been a fine drizzle all morning here, so photographs inside were required, the vase sitting on a paper ‘doiley’, not quite a snowflake but a nod in that direction. A group

of tiny pyramidal apophyllite crystals served as additional props for the same reason. Apophyllite is believed to be a powerful crystal beneficial for meditation and connection to the spiritual world. To provide a contrasting background for the vase and props a piece of bright green felt was placed on the floor, probably better (and certainly less alarming) than the alternative citrus yellow piece I brought down from the loft at the same time! Nearly forgot to mention the additional foliage – a sprig of lime green ivy.

So that is today’s vase, another Monday challenge completed. You would be most welcome to join me and others in posting a vase every Monday or just once in a while. The spirit of the meme is to find material in your own garden or foraged locally to place in a container – but it is after all a personal challenge so there are no strict rules – but so we can all share in what you have found it would be good if you could leave a link from your post to this, and from a comment on this post back to yours. See you soon! 🙂 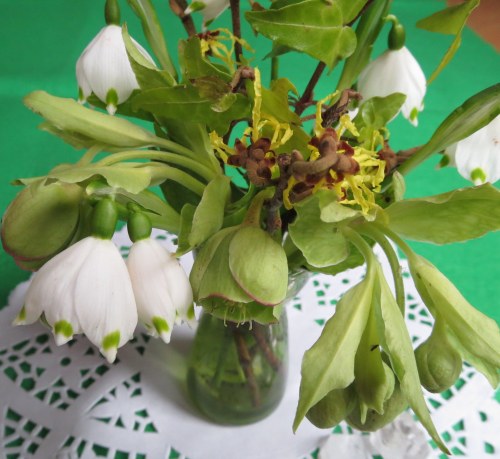 Like Loading...
This entry was posted in Being Creative, Gardening, Gardens, In a Vase on Monday and tagged apophyllite, Galanthus 'Flore Pleno', Hamamelis 'Arnold Promise', Hellebore foetidus, Leucojum vernum. Bookmark the permalink.

54 Responses to In a Vase on Monday: Spring Snowflakes