A Sructural Border in the Making

You may have caught a glimpse of a new archway in the recent EOMV post, either in the video or amongst the still photos; the archway has now been painted, and has another climbing rose ‘Claire Austin’ planted at its base, planned to link with the two roses already established on the pergola on the right of the above photo, thus extending the structure. 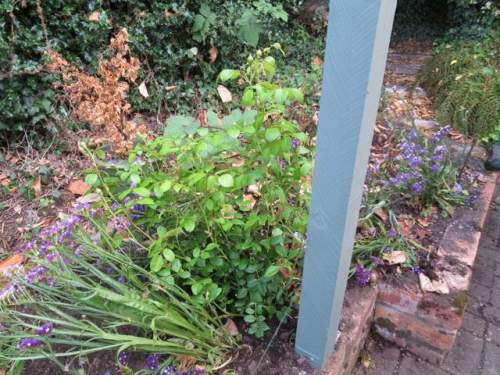 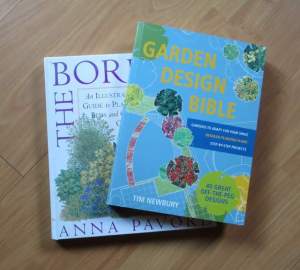 This new structure is the starting point for the rebirth of the ex-snowdrop border, currently filled for the summer with annual limonium. I have been seeking inspiration since the named snowdrops were moved to their new home in the woodland in March, walking past and studying the border, looking out for ideas from gardens I have visited, asking visitors to our garden open days for their suggestions and consulting books for ideas and inspiration…

…all to no avail. Instead of working to an overall border scheme as I had hoped, it now meant reverting to the incremental approach that most of the garden has been built upon. Had I any ideas at all? Yes, extending the pergola with Rosa ‘Claire Austin’; new posts added, painted and rose planted. Anything else? Yes, adding height that wouldn’t interfere with hedge cutting in the autumn; two obelisks have been added for clematis, which can be cut back and the obelisks removed before hedge cutting if necessary. More? Because the border is visible from the kitchen windows, ideally there needs to be something to see in the winter; as well as the obelisks, perennials with striking form that last over winter (I already have veronicastrum, phlomis and perovskia grown from seed, but grasses would work too) and shapely shrubs could fulfil this brief. I have also moved a struggling witch hazel, H ‘Ruben’ from the edge of the woodland to the far left of the border where hopefully it will survive and bloom again.

Will it work? Time alone will tell, but just adding the obelisks (of differing heights) to the border along with the pergola extension brought it to life, so replacing the temporary limonium at the end of the season with structural planting is looking promising and I invite you to follow the border’s evolution alongside me.

10 Responses to A Sructural Border in the Making