Six on Saturday: Mysteries and Curiosities 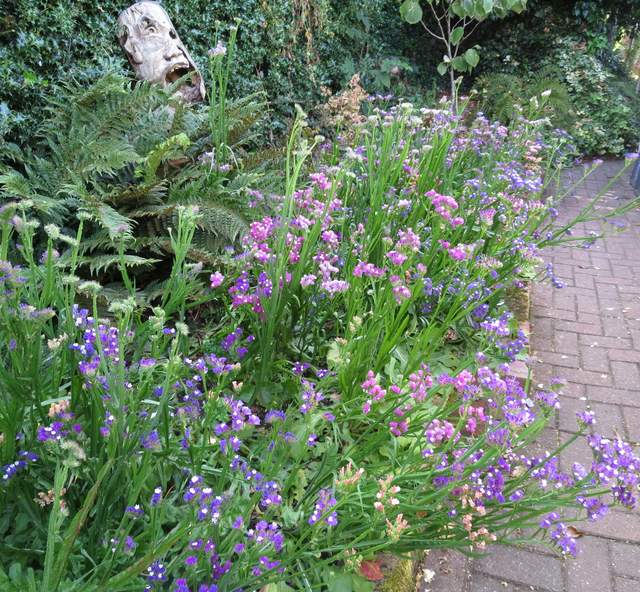 I solved the mystery of the absence of white limonium in the ex-snowdrop border this week, when I discovered it growing in the cutting beds instead! There were meant to be diagonal bands of pink, purple, pale blue, salmon and white along the border, but I must have got my labels mixed up at some point because the white version has taken the place of ‘Purple Attraction’ in the cutting beds, giving a double dose of purples in the snowdrop border. Hey ho, never mind!

Close inspection of the garden has been limited this week due to the rising temperatures, but I did happen to notice this curiosity on Clematis ‘Walenberg’ – a teeny white flower very different from the purple and white colouring of the other blooms, and perhaps a throwback to a native clematis used in breeding. Taken in full sun,  the photo is not especially clear:

Another clematis curiosity which never ceases to intrigue me, are the delightfully quirky  green and white crumpled handkerchief blooms of C viticella ‘Alba Luxurians’; often camouflaged against the foliage, it is always a surprise when the first blooms are spotted:

When I gratefully received a cutting of the striking purple dahlia ‘Top Totty’ from Brian the dahlia man back in 2018, as a backup I took cuttings once it was mature enough to go outside and have maintained two plants each year since. No longer available from suppliers, I guessed this was a sensible precaution to ensure I would always have one. Sadly my plans went awry, as one tuber failed over winter whilst the second only produced one shoot which I accidentally broke off; the latter was potted up, rooted, and is still alive but not thriving, whilst the tuber produced another shoot and was eventually planted out, but has sulked ever since and not grown beyond six inches or so… Before this, it rarely produced more than one or two shoots each year, although they did mature to flowering stems. Perhaps it is no longer available from garden suppliers because it wasn’t reliable…?!

Whilst talking about dahlias, this is the first year since I have been growing dahlias ‘seriously’ that they have been troubled by earwigs, assuming that’s who it is that has been munching them, well, munching D ‘Happy Single Juliet’ at least. When I first tinkered with dahlias in 2013 they devoured almost all of my sole dahlia bloom, but it has never been an issue since, fortunately. Perhaps it’s a one-off…

I have had the first blooms on my sunflowers this week, the reliable dark red ‘Velvet Queen’ and a new curiosity, ‘Sun Fill Green’. The latter gave the impression of being a green sunflower, so I was rather disappointed to see yellow petals appearing. However, on checking the source details (Plants of Distinction) I was reminded that ‘the colourful corona of the calyx and the spiky leaves at the base of the flower really do have the ‘wow’ factor. Cut the flowers early before the petals form and use for dramatic effect in bouquets and arrangements’. As the heads are barely two inches in diameter you would hardly notice them until the yellow petals emerge, so you would have to stand guard over them to catch them at their greenest – and at no more than 3 feet tall, they are half their supposed size. I shan’t be growing them again! 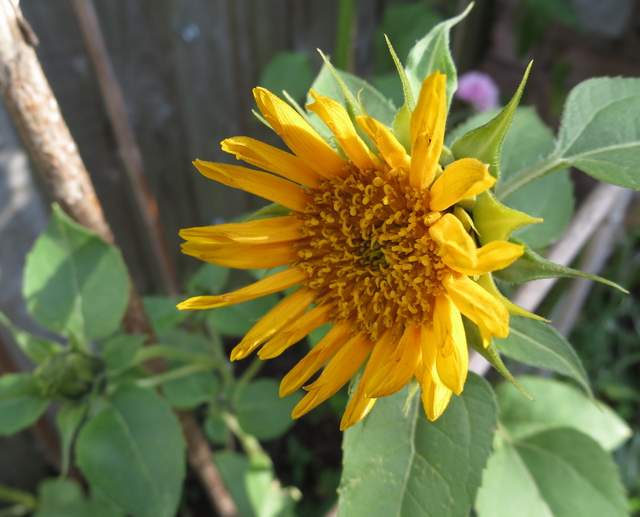 These are my six for today; no doubt our Saturday host Jon the Propagator will have a sizzling six to share, along with many other contributors, so why not check them out?

Like Loading...
This entry was posted in clematis, cutting beds, dahlias, Gardening, Gardens, Six on Saturday. Bookmark the permalink.

24 Responses to Six on Saturday: Mysteries and Curiosities