Every day there seem to be new things to discover on my rambles around the garden, so today here are glimpses of six of them for Jon the Propagator’s popular Saturday meme, starting with Clematis macropetala ‘Albina Plena’ (above), new for this season, and an unknown tulip (below) with an astonishingly egg yolk yellow centre. Not one of the bargain batch planted in the tub in January, it must be a survivor from a previous year.

In an adjacent tub is another survivor, Nemesia ‘Easter Bonnet’, just starting to reflower after coming through the winter unscathed: 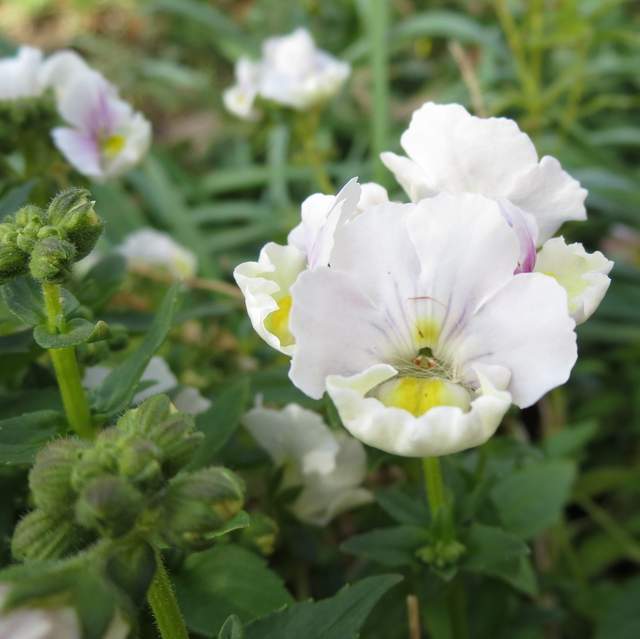 Discovered when photographing the nemesia is Cardamine pratensis ‘Helen Myers’, a purchase I had forgotten but which had settled in regardless, a serendipitous encounter as I was only recently bemoaning the absence of cardamine in the garden:

I had given up trying to establish white fritillaries in the woodland, leaving me to enjoy any white ones that appeared in a mixed batch, so it was a surprise when end-of-season bargain packs of white ones seem to happily establish, creating a few small clumps amongst the wider population of purple chequered bells. Although the snakeshead markings are absent on the white ones they still display the typical seersucker puckering – but like many white flowers are not the easiest of things to photograph:

Finally, one of two ridiculously early flower buds on climbing rose ‘Crimson Glory’, planted last year but only just beginning to climb, the glimpse of colour to come looking curiously like molten sealing wax, bringing to mind the occasions not so long ago when, as a Presiding Officer in elections, we still sealed the ballot boxes with sealing wax. Thankfully this is a thing of the past, along with wooden polling booths and having to perforate each individual ballot paper with the official mark.

17 Responses to Six on Saturday: Glimpses