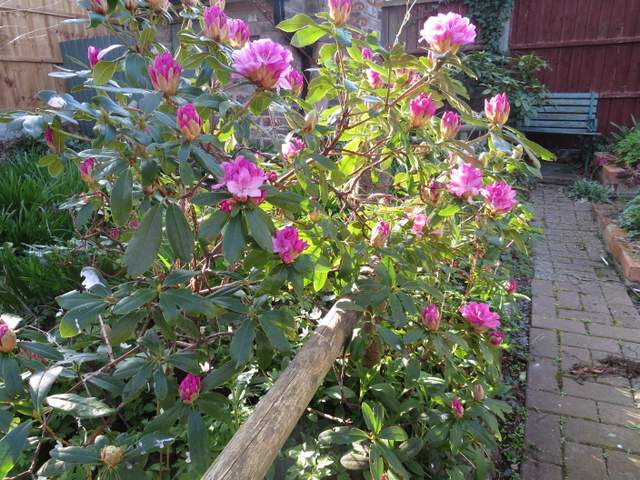 Having somehow lost the photos I was going to use, I nearly didn’t post today – but guessing they might have been accidentally deleted I managed to find them in the recycling bin and restore them…whew!

Today’s six are all surprises in one way or another, although now that spring has sprung there are all sorts of things popping up in the garden and perhaps surprises should be expected. Nevertheless. I am ashamed to say that I almost missed Rhodendron ‘Cheers’ (above), green and shiny one day, then green and shiny and covered in pink blooms the next! Even knowing it is there I can still miss it on my rambles around the garden because the different routes that can be taken all seem to bypass it, which sounds daft in what is not a huge garden. Worth a special ramble just to see it though!

The Winter Sunshine sweet peas have been growing steadily since they were planted out in the border in the working greenhouse and I was anticipating the first buds sometime around now, and they haven’t disappointed me this year so are not really a surprise. It is unlikely any will open within the next week so there will be no sweet peas in March, but it won’t be much longer. And before you exclaim at their earliness, let me remind you that they are a variety bred to flower at lower light levels, but must (in the UK) be grown in the greenhouse. They have proved to very reliable and will keep flowering into June and beyond, although they will get cleared in time to plant out the greenhouse tomatoes.

In the Coop, I finally have a hippeastrum in bloom, but only after bringing it and its friends into the warmth of the house to give them a boost – next time I think I will start them off inside instead of allowing them a long growing season just in the Coop. An additional surprise is that it is not what was expected from its ‘Lemon Star’ label! 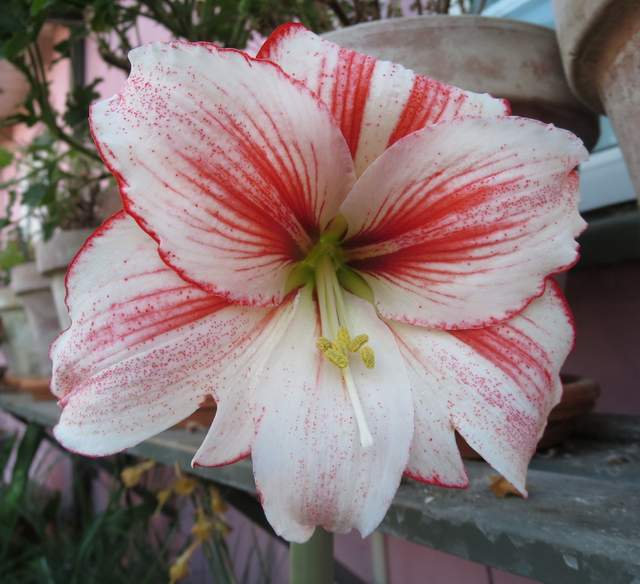 Should we really be seeing buds on our allium in March? Perhaps I just forget how many allium are late spring rather than summer bloomers… 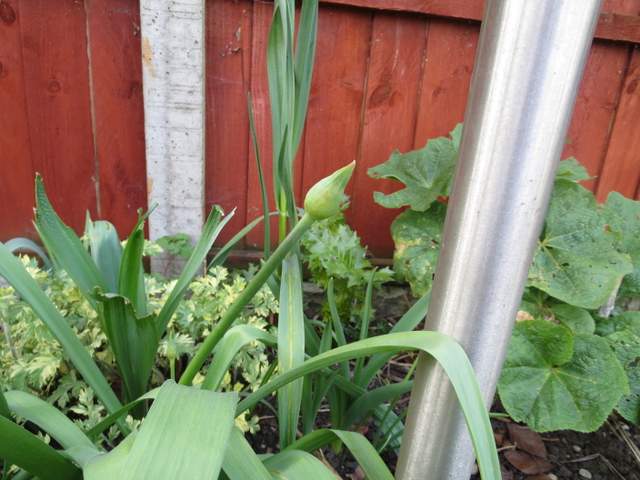 I stopped to observe the emerging foliage in the four square pots on the paved area during the week, and was very puzzled at what was clearly going to be a hyacinth; these pots are invariably planted with tulips so was it just a single interloper, or were there others? A bit of brain-wracking ensued until I remembered that in the absence of tulips in Aldi to boost my Peter Nyssen purchases, I had reluctantly bought some mixed bulbs instead, although ‘mixed’ as in ‘curated collection’. I am not hugely confident, mainly because of the potential for different flowering times, but nevertheless the result will be interesting to see in due course. 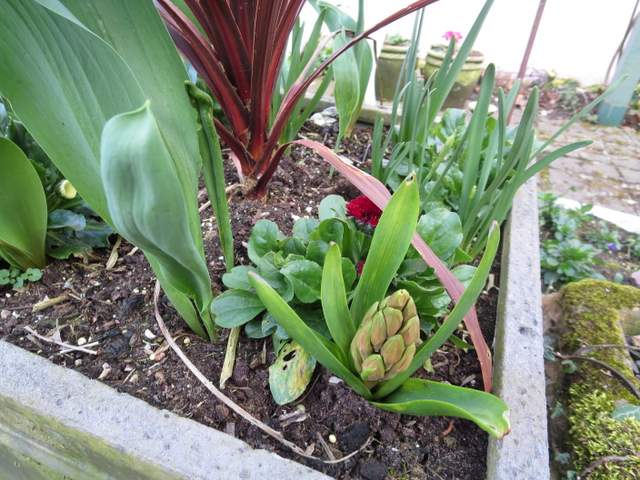 Jon the Propagator who kindly hosts this meme may be particularly interested to hear about the last of my six. It is most definitely a surprise and, for me, a very exciting one…there will be some galanthophiles amongst you who will know what the picture shows, but for others, let me explain:

A few weeks ago, as the snowdrop season was beginning to tail off, I looked over my named snowdrop border and lifted any potted ‘no-shows’ to establish whether there was anything left of the bulbs in the pots. Without being specific about numbers, there were a couple that could possibly be rescued, some with nothing and four with manky partial bulbs remaining. In the past I might have repotted the latter category and crossed my fingers but have learned it’s not worth the compost; however, rather than composting them and therefore with nothing to lose, I thought I would have a try at ‘twin-scaling’ or ‘chipping’, a means of bulb propagation. Bearing in mind (a) they were not healthy bulbs, (b) it’s not the time of year to do it and (c) I didn’t sterilise anything as perceived wisdom and snowdrop experts recommend, but just cut them into pieces and bunged them into plastic bags in damp vermiculite, the result in just a few weeks was a very unexpected surprise indeed! Look at those teeny bulbils on this scrap of bulb…!

Please note, this is most definitely not a recommended way of going about the process, but perhaps more of an acknowledgement that it is something an amateur can achieve – and very exciting too!

24 Responses to Six on Saturday: Surprises