Six Sights on Saturday, Not All of Them Pretty

I haven’t joined in with Jon the Propagator’s Six on Saturday since before Christmas, probably due to a combination of inadequate material to post about, short days, inclement weather and the amount of time I have to sit in front of a laptop and write a post, but I have made it today, with a real mixed bag, which these posts often are.

The presence of naturalised snowdrops in the woodland edge border is becoming increasingly evident as they push their way above the ground (above), albeit a number of weeks away from flowering. I would hazard a guess that this is more typical timing, as is the case with the species where there are still only a handful in bloom, Faringdon Double being only the second of them to open fully. I noticed today how many of the emerging clumps here have got a definite list to the left, presumably straining towards any available sunshine which has been in fairly short supply of late:

One of my recent tasks has been to collect up all the stray stakes and plant supports that litter the borders and put them back in the Bothy, a task now delayed because I have decided to tidy the bothy up first, putting up more hooks to ensure all the supports are accessible when needed: 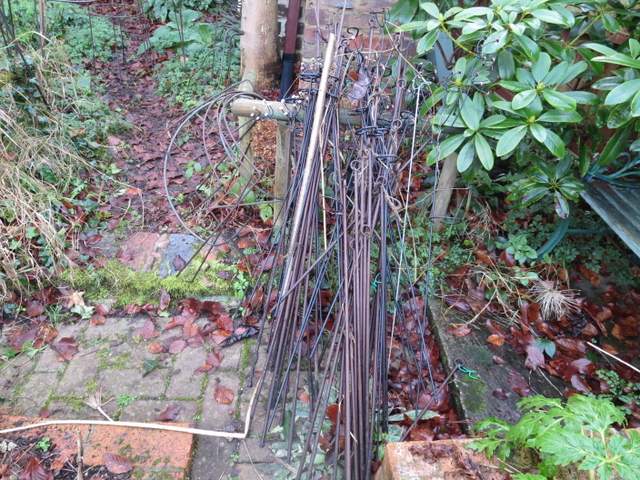 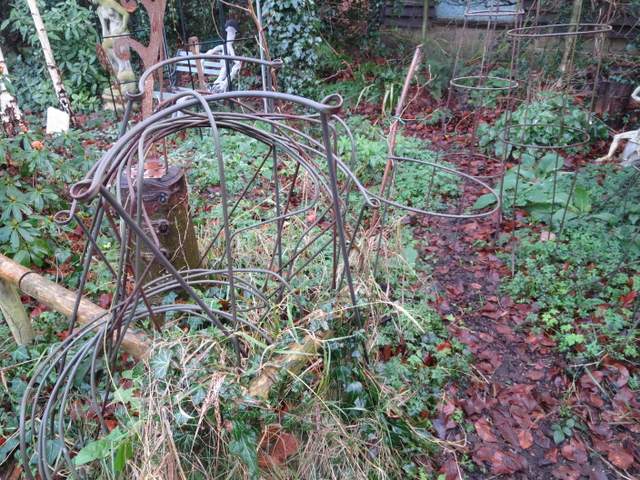 We have had some very chilly days recently with temperatures staying barely above freezing, accompanied yesterday and this morning by fog. Some tasks, particularly those that don’t involve soil, are more easily than others when it’s very cold, and rose pruning seems to come into this category. The climbing roses were all pruned towards the end of last year, but I managed to get stuck in and prune all the shrub roses on a bitterly cold day at the start of the year. I think my pruning has improved in recent years, although some bushes still end up looking more shapely than others – Rosa ‘Olivia Rose Austin’ is one of my better examples:

In the absence of inspiration for something arty to do with the silver birch stems, I was pleased to come across these wooden wind chimes in the loft (which had been undergoing a massive clearout recently), and which I thought had been disposed of. As a perhaps temporary measure, they look acceptable strung up from hooks screwed into the top of the stumps, but once I hear their insistent clack clack again on a windy day I might change my mind!

Finally, and definitely not a pretty sight, here are the soggy and browning flowers of Hellebore ‘Anja Oudolf’, still the only hellebore with open blooms, but suffering badly from the cold and frost in a way I have not witnessed before: 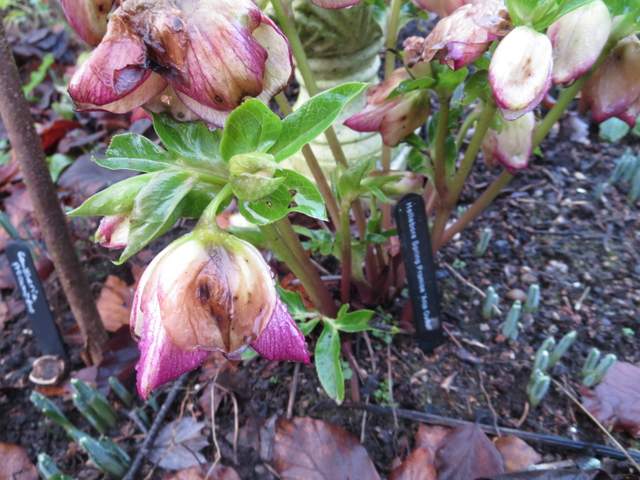 Like Loading...
This entry was posted in art in the garden, Gardening, Gardens, pruning, Winter, winter interest. Bookmark the permalink.

34 Responses to Six Sights on Saturday, Not All of Them Pretty