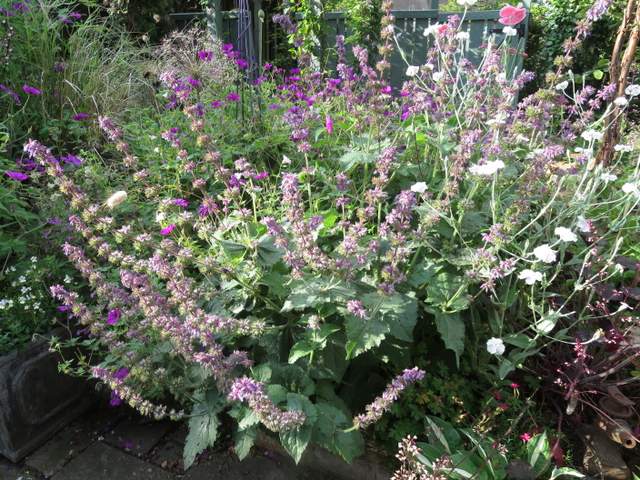 …what? OK? Acceptable? Certainly nowhere near ‘perfect’, but definitely improving and certainly the nearest to acceptable they have ever been.

Today I would like to share the three groups of borders with you, assessing their overall impact, and starting with the main borders, surrounding the sunken area and fronted with pots of hostas. The most recent map under The Garden tab above will show you which these are, now comprising five separate beds plus an additional one (not featured) against the Gallery Fence, filled with roses ‘The Mayflower’ and ‘England’s Rose’. Until last summer there were two larger beds and one smaller, but the larger two were split and the path moved to allow passage between them. This configuration works well and does give a feeling of walking more closely amongst the borders. Planting in the unchanged parts is also largely unchanged, apart from an attempt to fill gaps, whilst the realigned areas combine both re-planting and new planting.

Allium seedheads and various geranium are sprinkled throughout, together with annual Shirley poppies and cornflower. In the border above, Salvia ‘Purple Rain’ makes a great impact, ably supported by long-flowering Lychnis coronaria ‘Occulata ‘, but there are numerous other plants helping to knit the whole thing together. Geranium psilostemon is clearly evident in the adjacent border shown below, with a heuchera and Stachys byzantine ‘Big Ears’ providing an attractive structural edge on the corner. Across the pathway the range of height and form of the content works well, with Trifolium rubens, Erodium manescavii and a herbaceous clematis on a small obelisk standing out. 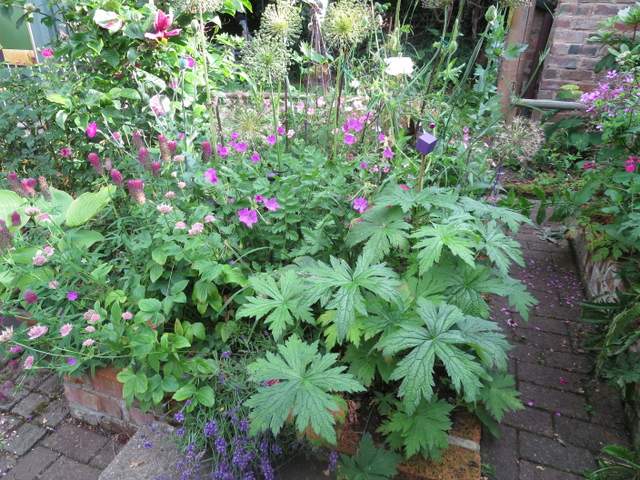 In the two back borders planting is little changed, leaving some gaps to fill which will be partially achieved with late-growing Salvia ‘Phyllis Fancy’, a new grown-from-seed Knautia macedonia and a replacement phlox for a clump that mysteriously gave up the ghost, but more taller residents are still required. Astrantia and lychnis are stalwarts throughout all these borders and are still flowering well enough not to require cutting back yet. 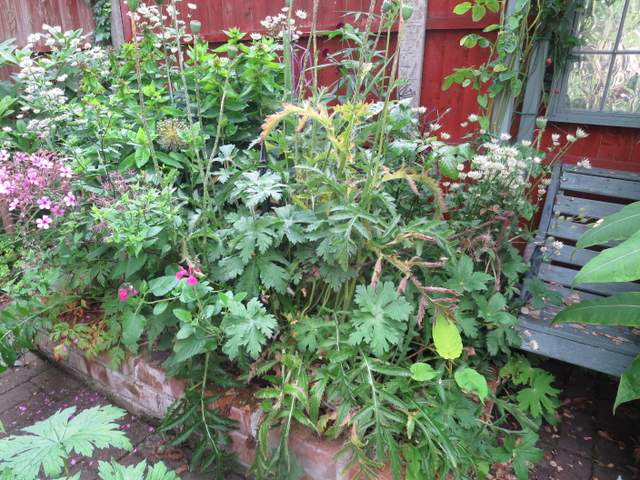 All these borders focus largely on pinks and purples, but further down the garden anything goes in the ‘bold borders’, or at least that was the idea; in practice it has always proved hard to find the reliable reds, yellows, oranges and blues needed to brighten up the pastel palette of other parts of the garden. However, this year these three borders have at least been the best and brightest they have been for a long time, although one suffers from lower light levels and has been penalised by the lack of impact of shrubby Clematis ‘New Love’, which hasn’t yet recovered from an overharsh prune. Crocosmia hasn’t performed well here for years, and I have not yet been successful with helenium and the like, although annual rudbeckia are beginning to add some colour. I have found everlasting helichrysum a very reliable annual in recent years and having added an orange variety to the cutting beds this year am now wondering whether this would be useful in the main borders too, for adding brightness… 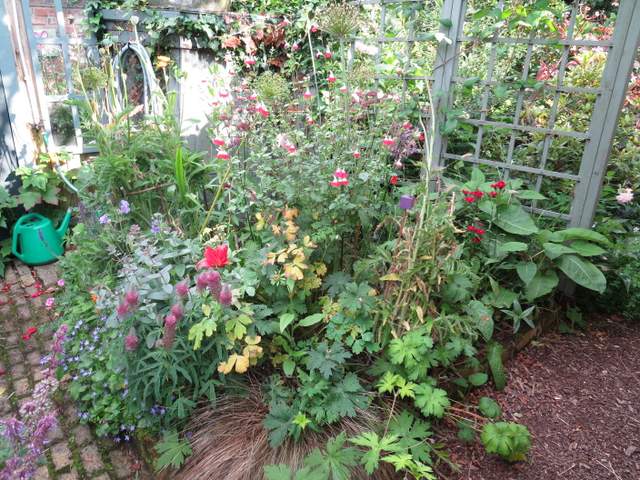 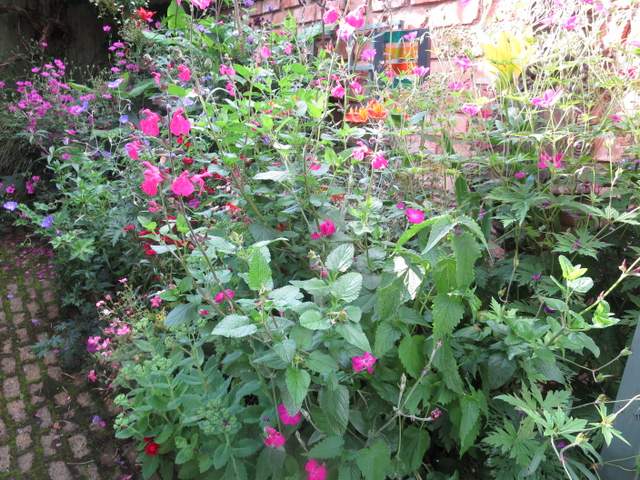 Finally, to the blue & white borders, also looking the best ever, but with some way still to go. Stalwarts centaurea in both shades, delphinium and echinops do their best, plus some reliable early spring blues and whites, but maintaining a season of these two colours has not proved easy. Campanula, white valerian and some blue-purple salvia have been added this year, with some more shrubby contenders in the lower bed where Clematis ‘Kingfisher’ has also begun to make a statement against the fence. 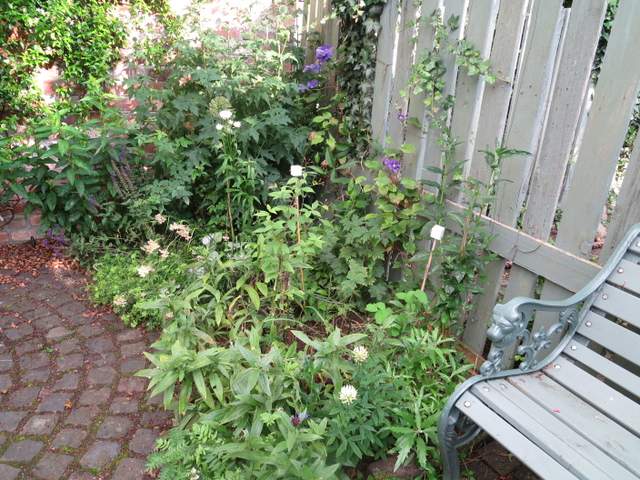 The extension to this area, albeit not a border, the area paved over in defiance of an invasion of ground elder and host to a number of pots, is a good idea in principle, but the choice of bedding plants has proved popular with the local slug and snail population and needs to be reconsidered for next year. Maybe permanent plantings of perennials would be preferable, or summer bulbs, still limited to the blue and white colour palette? And, thinking aloud, perhaps the fence needs an injection of colour to support the theme…?

I know that looking at these pictures gives only a rough idea of the borders, and you would need to view them in person to be able to fully assess the nature of the contents, but photographing and writing about them on the blog is for me, like End of Month Views, a useful tool for recording and monitoring progress in the garden, and often comments from those reading the blog can trigger a thought process that brings about a new idea or project or simply new plant choices – bring it on!

Afterthought: this year I have really begun to appreciate that many plants take longer to establish than we think they will. Many plants have been lost because they were planted out whilst relatively small and failed to compete with their neighbours, whilst others have taken a number of years to reach flowering stage. It makes sense, I now know, to ‘grow on’ most plants before planting them out, and of course have always known to allow space when planting to allow for plants to grow to their full size – but have chosen to ignore it! Hence, the borders are stuffed, which perhaps adds to their attraction but makes it harder to grow healthy plants. In theory, once I feel the borders are established they can be edited and non-performing plants removed or exchanged, but so far they have not reached that point although they are certainly getting closer – nevertheless, as a plantlover there will always be the temptation to cram in more plants!

13 Responses to Bordering On…