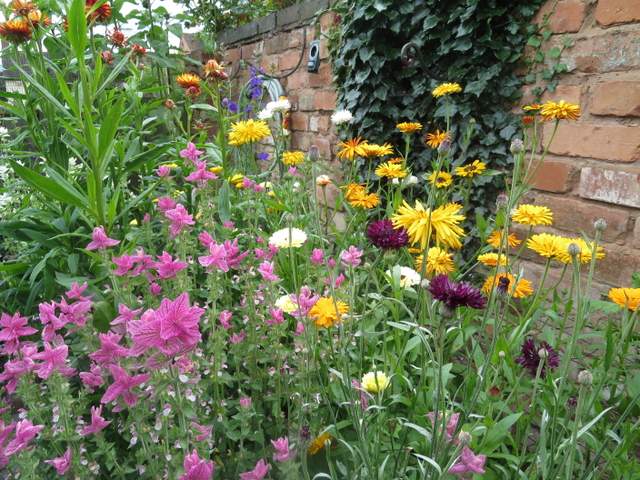 There are four cutting beds down beside the working greenhouse, in the sunniest part of the garden, plus two beds with dahlias and sweet peas, and I thought I would share these  first four and their contents with you today. All grown from seed, the first (some cosmos) contents were planted out at the beginning of  April and the last (antirrhinum) in the third week in May; except for the cornflowers, all were slow to get started but made up for it by the end of May when temperatures began rising and we had the benefit of some short but regular showers. All four beds have 2 layers of 4″ horizontal netting to provide support and after a few feline incidents we added a sonar cat deterrent and a strip of wire mesh along the fenceline. The plan below shows you and visitors to the garden on our open days what was planted where:

The first photo was of the bed in front of the greenhouse entrance, seemingly dominated by calendula and clary, but there are other residents, like larkspur (my first success from seed), helichrysum (the no-name orange was not meant to grow as tall as it has done!) and an interesting mid-height, multi-branched sunflower called ‘Sonja’:

The corner bed has the taller sunflowers, with ‘Velvet Queen’ just coming into bloom, with more clary, a ‘spare’ dahlia and rudbeckia in bud. The sunflowers must surely have grown a couple of feet whilst my back was turned! 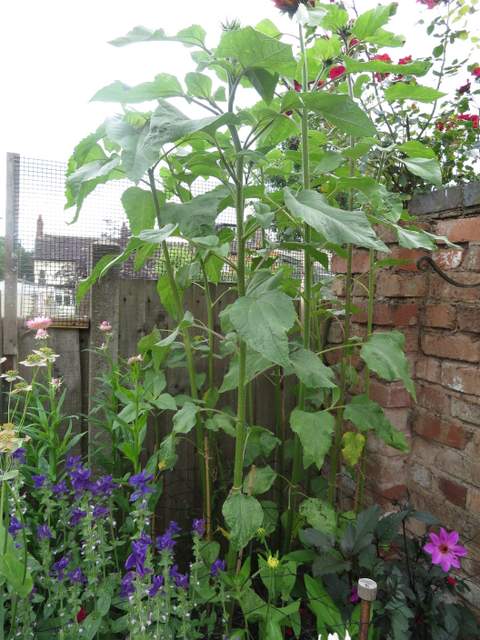 The third bed is home to the cornflowers, more calendula and rudbeckia, dwarf sunflower ‘Solar Flash’ and underperforming amaranthus, which I think will be dropped from my seed list for next year – and Antirrhinum ‘Liberty Classic Scarlet’, which seems to have taken liberties with its name…

The fourth bed is split between cosmos and zinnia. The cosmos is only just beginning to make a real impact, hindered by poor germination in a suspect compost, from which C ‘Fizzy Rose Picotee’ never really recovered, and a rogue variety disappointingly masquerading as ‘Double Click Cranberries’. In a second year of success with zinnias, I am now confident with my early sowing and early planting out regime (early February and mid-May respectively, although I would adjust the latter if frost was still likely), and can probably look forward to blooms for at least 3 months. 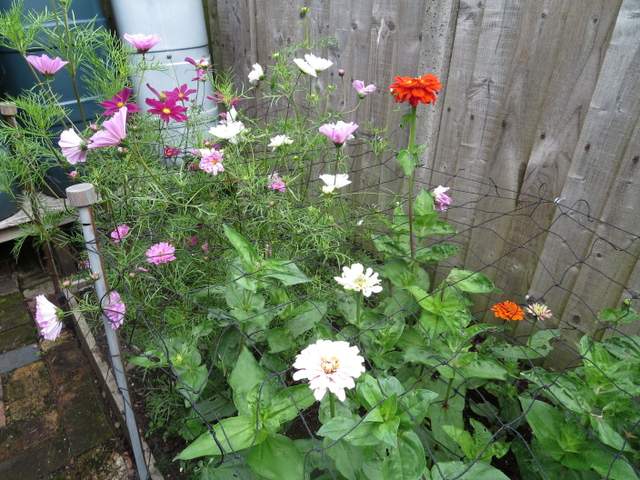 The cosmos is not the only cuckoo in the nest, as there seems to have been some hanky-panky amongst the calendula too, with all 3 varieties having blooms of mixed-race – although having checked my seed list ‘Indian Prince’ was the product of seed collected here last year, so a heavy sprinkling of yellow amongst the orange is perhaps understandable. I do buy some seed from eBay, mostly from dedicated seed-sellers, although even reputable companies sometimes inadvertently sell rogue packets, but will perhaps make sure I buy the more promiscuous varieties from the bigger companies in future.

The cutting beds first became a feature in 2015, so this is their seventh year, and the same realisation that I had back then is equally valid now: ‘whether I pick the blooms from these beds or not, they have brought untold pleasure by just being there’. Yes indeed, for like much of the rest of the garden they are eagerly inspected every day, every new bloom noted, every dead head snipped off (sometimes!), and much gazed upon… For me, every part of the process is a joy, from the seed sowing which usually begins at the end of January to, perhaps bizarrely, pulling up and composting the spent plants at the end of the season, with the abundance in between being part of a much bigger picture. And of course it is not just me, with others benefiting from posies picked from them, neighbours enjoying their brightness from upstairs windows, and a range of wildlife feasting on them (hoverflies having been in noticeable attendance this year)…definitely an asset, and a successful one at that.

11 Responses to Definitely an Asset