In a Vase on Monday: Sugar Rush

With sugary colours in mind, centred on Rhododendron ‘Christmas Cheer’, I was contemplating including a rogue wallflower which I think was from a batch grown from seed some years ago. I remembered growing ‘Sugar Rush Purple’ and possibly others from this series (and could consult my seed sowing list to find out), but on Googling this it was clearly not the purple strain as the wallflower I now have is more of an ordinary blood red – and not in fact sweet enough to work well enough with the rhododendron anyway. 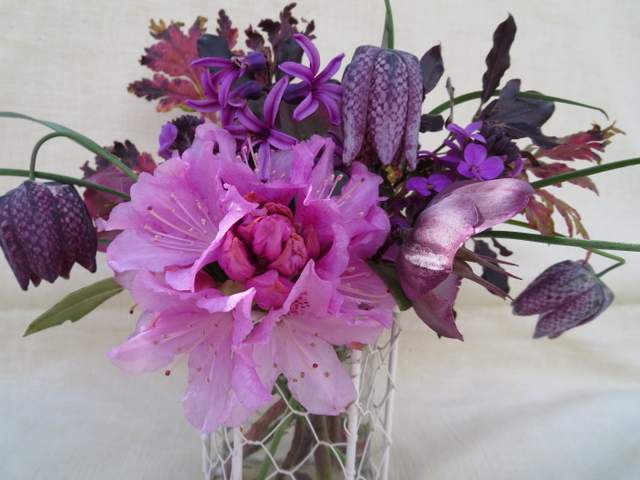 Instead, I plucked complementary Fritillaria meleagris, slightly past-it blooms of Hellebore ‘Dorothy’s Dawn’, ex-Coop hyacinth ‘Woodstock’, blooms from a new Erysimum ‘Bowles’ Mauve which I will try hard to keep perky and prim rather than letting it become old and woody, pretty leaves of Geranium palmatum (I think!) and a sprig of foliage from Pittosporum ‘Tom Thumb’. A sugar bowl from a child’s toy tea set (IKEA) and a toy spoon are the props for today, and the vase is a caged glass cylinder that came to me with a potted hyacinth or other bulb some years ago.

I haven’t cropped the bird’s eye view photo below, as the sunlight was casting some interesting shadows – no orbs this week though!

There were several routes that could have been followed for a vase today, and I suspect this will now be the case for many, many months – ‘hurrah for spring!’ I was going to say, but here there have been ‘hurrahs’ throughout the winter months, and I am very grateful to our garden for all the seasonal joys they produced.

Are there any seasonal joys to be found in your garden at the moment that you would be willing to pick and pop in a vase, where I am sure they would still bring you pleasure? If there are, please consider sharing them with us by leaving links to and from this post.

Like Loading...
This entry was posted in Gardening, Gardens, In a Vase on Monday, Spring and tagged flowers in a vase. Bookmark the permalink.

34 Responses to In a Vase on Monday: Sugar Rush