In a Vase on Monday: Flags 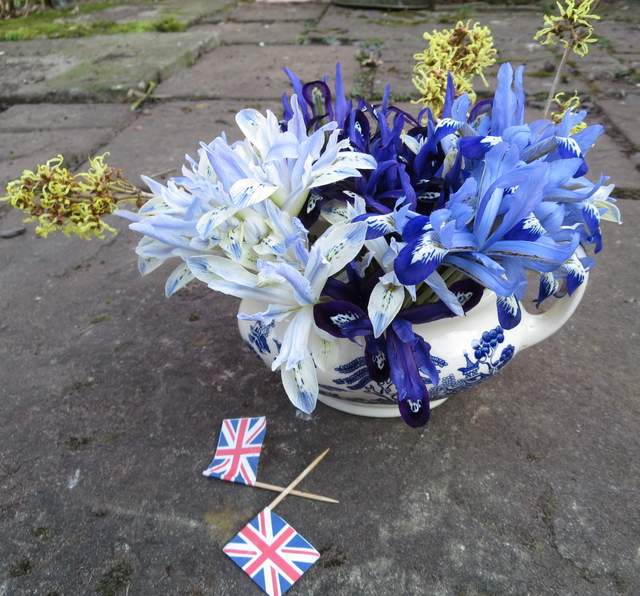 Flags on flags with flags…or rather iris on paving slabs with a couple of Union Jack flags!

If the ‘Tête-à-tête’ hadn’t been in flower for the first time last week and therefore automatically destined for Monday’s vase, these iris would have been there instead. Fortunately still good enough for cutting a week later, these redundant Iris reticulata potted in readiness for our cancelled February garden opening will probably now be composted, as they don’t consistently perform in open ground and, at a few pounds per 25, are cheap enough to be disposable. There are three varieties – Clairette, Blue Note and Painted Lady – and once picked I decided rather than mixing the colours I would just plonk them in the vase, a vintage willow pattern gravy boat, as they were. A few wayward sprigs of witch hazel Hamamelis ‘Zuccariniana’, stunningly beautiful this year, were added to bring out the soft yellow in the patterning on the iris, but I am not sure they really bring much extra to the display.

Irises being sometimes known as ‘flags’, including these two little flags (retrieved from party food way back in the days when I was still working, most probably during a celebration of William & Kate’s royal wedding in 2011) was always on the cards, and not the first time they have been pressed into service as props for a Monday vase. Photographing them on flagstones in the garden just goes to show how what a curious thing language can be, often with several meanings for the same word – no wonder playing with words can be great fun!

Playing with vases can be fun too, and popping something from your garden into a vase on Mondays  is a most enjoyable game. If you would like to join in, please leave the usual links to and from this post.

Like Loading...
This entry was posted in bulbs, corms and tubers, early spring, Gardening, Gardens, In a Vase on Monday. Bookmark the permalink.

47 Responses to In a Vase on Monday: Flags