Still Blooming After All This Time 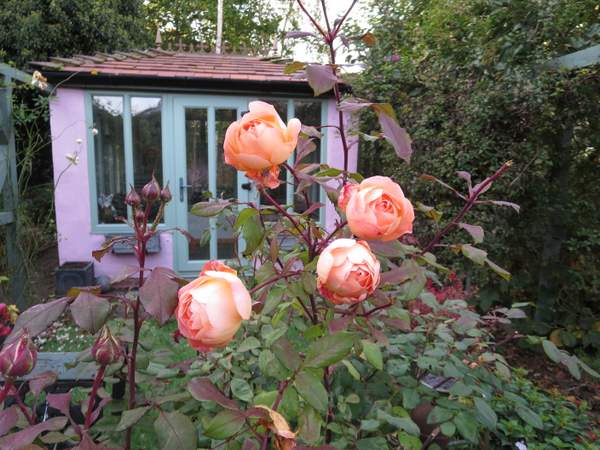 Without a fixed date of posting top blooms each month, it becomes a random combination of when I think about it and when I have the time, in or around the third or fourth week, but it continues to form a useful record of what is flowering at different times of the year.

Although I have begun defoliating roses in the garden, I have tackled those showing signs of blackspot first, and Rosa ‘Lady Emma Hamilton’ (above) is not one of them. She sports not only healthy but beautifully tinted foliage along with a good crop of blooms and buds, even at this stage in the year, and has been outstanding this season. It seems to have been a good year for clematis too, and it is not only ‘Walenberg’, shown several times recently, that is still flowering, but nearby C ‘Södertälje’ too: 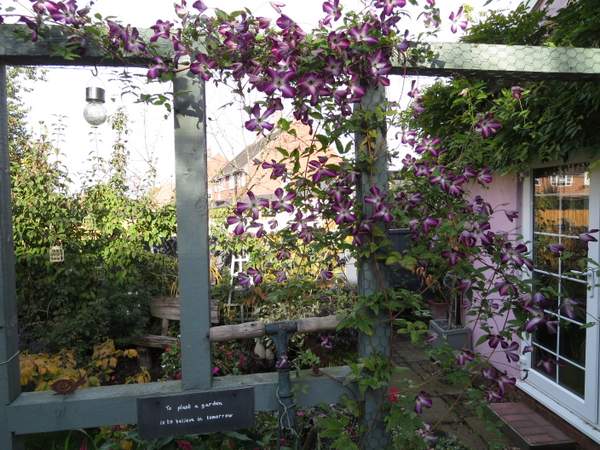 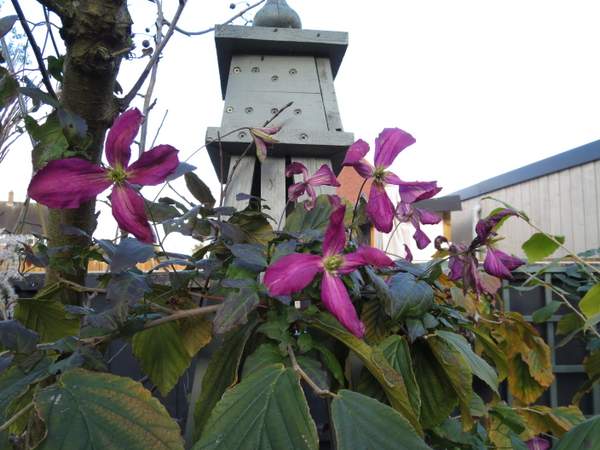 Most persicarias are still blooming too, also after several months, with some showing no signs of flagging at all, like P ‘Inverleith’:

The shrubbier salvias are still in full flow as well, as exemplified, by S ‘Neon’ (below); I am intending to replace this woody example next season and am currently nurturing a cutting which will be cut back regularly to maintain a better shape and restrict future woodiness.

A plant that rarely but unfairly gets a mention on this blog is the floriferous Erodium manescovii, which hasn’t stopped flowering since early June, a geranium-like plant new to me until introduced by Ali the Mindful Gardener a few years back. Commended for its long flowering season, I would happily recommend it widely too.

Sedums or telephium are at their best in September or October, and all of mine are looking all the better for their first-ever Chelsea Chop. The gorgeous deep colour of ‘Purple Emperor’ is accentuated here by the adjacent Hebe ‘Magic Summer’:

Popping down to the bottom of the garden and the cutting beds to finish the round-up, the dahlias are just as much at their best now as they have been for months, again flowering from June, and they seem to have got taller as the season has progressed. It was a good decision to plant them in beds separate from the others, so they can be admired without any competition. I will cull (well, consign them for sale at a future garden opening) a couple of them when the frost has seen them off for this year, replacing them next season with more choice varieties.

Standing out amongst the annuals from the adjacent cutting beds to complete October’s top blooms are the dependable clary sage, the less common alonsoa and annual scabious. All three have been completely trouble-free from the beginning and will automatically remain on my seed list for next year. The clary sage and scabious have been used frequently in vases, the latter being attractive in bud, full-flower and seedhead form and having the advantage of long stems clear of foliage, whilst the alonsoa has not been picked this year and would make a great addition to the bold borders in future. Last year some scabious overwintered, so I shan’t be pulling any of the plants out, just in case, and I shall investigate additional varieties to join my current favourites.

*from ‘The Glory of the Garden’ by Rudyard Kipling

14 Responses to Still Blooming After All This Time