The Eyes Have It: Six Spots, Patches and Circles on Saturday

Having finally given the Golfer permission to pick the rest of the apples, it now fell to me to Do Something with them – one of the less enjoyable seasonal tasks as we have never had anything other than a good crop. Fortunately I had already given bagfuls away, and after having prepared and blanched as many of them that I felt might be needed during the year, I thought I would try drying a few of them in the Aga.

I borrowed a friend’s dehydrator some years ago with reasonable success, creating a large supply of leathery and pleasantly chewy apple slices which kept for ages, but decided to tap the constant heat of the Aga instead. The skins were not all perfect so the apples were peeled before being sliced thinly and placed on baking parchment and left in the warming oven of the Aga overnight, this time giving tasty apple ‘crisps’ instead of leathery slices, which a few hours less would probably have produced. I shall certainly make some more as they were fairly quick to prepare, and then give the last of the apples to a friend who keeps horses!

With showers forecast for later, I allowed myself a small diversion to my after-breakfast ramble, to pick the currently ripe raspberries in the fruit cage – and was gobsmacked to see extensive patches of fungi growing in the woodchippings that the whole area is mulched with. I am no expert on fungi and, having been severely reprimanded by friends’ parents as a fairly young child for picking fungi in the woodland we were camping next to, would never pick them now, even if they were edible. I am sure these will be something very ordinary and there will be people reading this post who will be able to identify them: 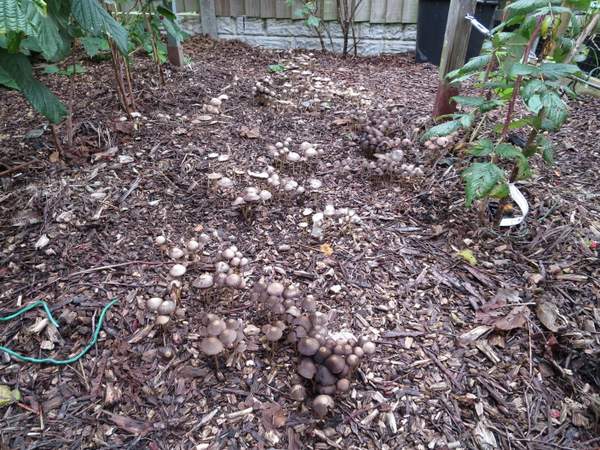 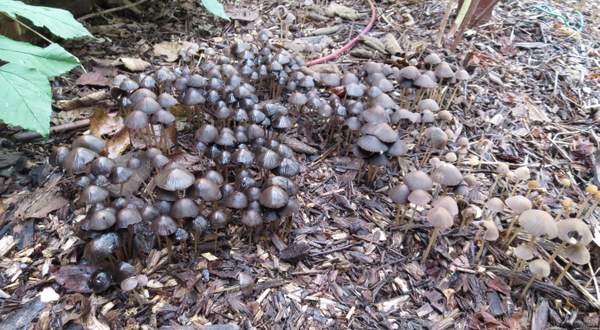 Anna of Green Tapestry asked me recently which of my many witch hazels coloured-up best; my reply was that they tended to vary from year to year, but seeing this glorious patch of colour today reminds me that Hamamelis ‘Zuccariniana’ must be up there with the best of them. It positively GLOWS!

Bulb ordering is made a little easier by noting down gaps and ideas as they occur – I then staple the list to the Peter Nyssen catalogue (where most of my bulbs come from) for quick reference when I come to order the next time. Earlier this year I noted there was a bare patch in the streamside grass, the whole area generously sprinkled with Crocus tommasinianus and Narcissus ‘Tête á Tête’ apart from one corner. Rejecting the suggested random strewing of bulbs, this was remedied today by inserting my spade a few inches and lifting a thin wedge of turf and soil and placing the bulbs along the bottom in long wavy lines. It’s pretty quick and looks reasonably natural.

Having sprayed them fairly early on in the season, the roses here have been fairly free of black spot this year, although I didn’t get round to a later spraying and some bushes have succumbed quite late on in the season. I noted that almost all leaves on ‘Darcy Bussell’ and ‘James L Austin’ in these two beds were affected so this morning these were the first to be defoliated. Defoliation is a technique I have used for the last couple of seasons, ever since I was ordering potted roses from David Austin in the autumn and they advised me they may already have been defoliated prior to despatch. I learned that each autumn they defoliate ALL the roses in their show gardens and nursery to reduce the risk of black spot, and at only a few minutes for each bush even with my abundant collection it isn’t a huge task and I will gradually do the same with the rest of them before they drop their foliage. 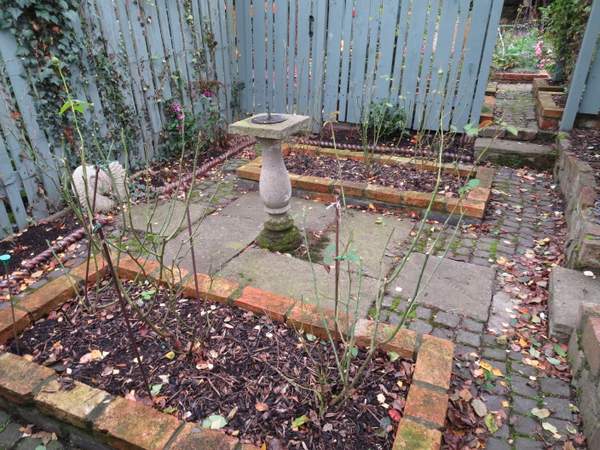 Back in June, I arranged for the first of a series of aerial photographs of the garden, taken by a near-neighbour, a professional photographer. The first of these, with our plot outlined, is already posted on the blog under The Garden tab, and below is our garden patch in September, the absence of the oak tree very noticeable to us but perhaps less so to non-residents. I am particularly looking forward to the next one, which will show the garden in December and almost entirely devoid of leaf cover.

So there we have my six spots, patches and circles on Saturday, put together for Jon the Propagator’s weekly meme. Please visit his blog too see his own six and find links to the varied sixes of other bloggers throughout the globe.

24 Responses to The Eyes Have It: Six Spots, Patches and Circles on Saturday