As autumn progresses, it brings with it a range of changes within the garden as annuals turn up their toes, herbaceous plants cast off their earlier finery and trees don their autumn outfits before casting them off like an eager lover. Some changes involve glorious transformations from green to reds, oranges and yellows, but sadly not all seasonal deaths and hibernations are graceful and attractive experiences.

Hostas, for example, begin with a hopeful yellowing of the foliage before giving up trying and shrivelling and shredding instead, and I don’t know what has happened to the pot of Busy Lizzies shown below. They haven’t all collapsed like this, and I showed one of the better ones yesterday; I thought at first watering had been neglected too many times, although they still usually pick up perkily once they have been watered. It is almost as if they have been caught by a frost – which they haven’t, but perhaps they felt the brunt of a cold wind? It seems unlikely so late in the season that they could have suddenly been stricken with the downy mildew that removed Busy Lizzies from our gardens for a number of years. Anyone else had this issue, I wonder? 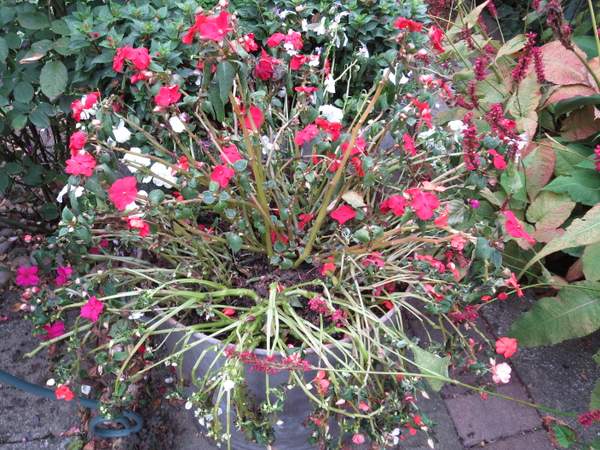 Echinops never age gracefully and I allow the local bird population only a short window to get any seeds they want before I take them out. In fact, having had two sets of friends visiting over the last two days and no more planned, I will probably start taking out the worst of the dead material in the garden very soon. 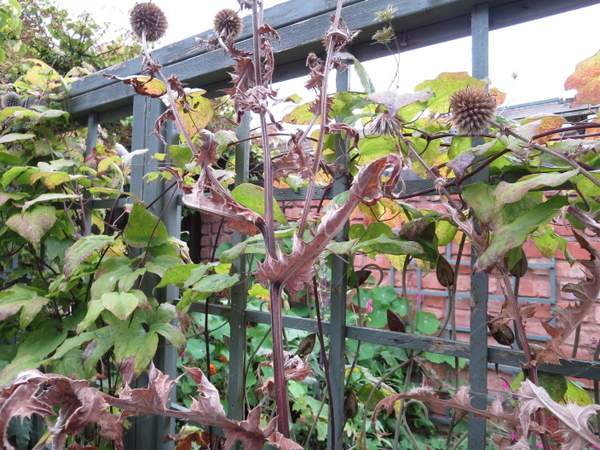 Behind the vibrant zinnias, rudbeckias and Cosmos ‘Double Click Cranberries’ that I showed yesterday lurk other cosmos, not at all a pretty sight and definitely ready to come out as soon as time permits. Although both from the same Double Click series these others haven’t grown as tall, and adjustments will need to be made in next year’s planting plan.

Amidst the late flowering clematis, some of which were also featured yesterday, many stems have already dried up ready for hibernation, with some plants valiantly doing both, like Clematis ‘Princess Diana’, which also sports seedheads as a bonus. 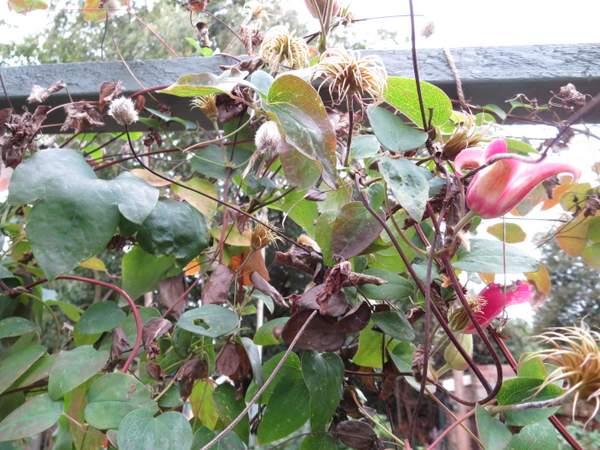 It would be a shame for all six my Six on Saturday photos to be disgraceful, so I shall end with the exuberant display of Clematis viticella ‘Walenberg’, which only emerged a few weeks ago after a delayed start but has more than made up for it with its remarkable ‘zero to hero’ growth. What a great display for the end of September, and popping over to visit SoS host Jon the Propagator‘s blog you will no doubt find many more fine displays.

Like Loading...
This entry was posted in annuals, Autumn, Gardening, Gardens, herbaceous perennials, Six on Saturday. Bookmark the permalink.

26 Responses to Six on Saturday: Disgraceful!