I decided, for want of anything else grabbing my attention, to share six yellow blooms from my garden as part of Jon the Propagator’s weekly meme – but then struggled to find six, nearly having to resort to half of them being rudbeckia. Pink or purple would have been easy, and I could probably stretch to six red, but in the absence of blooms on both The Poet’s Wife and The Pilgrim roses and the spathes on the yellow calla in the Coop currently being somewhere green and yellow (or perhaps yellow and green), it was a hard task and still includes two rudbeckia.

Above is Inula magnifica, not quite as magnificent as it used to be before I moved into the corner of one of the bold borders, but at least it keeps it in check and a manageable size. Does anybody know what sort of bee was visiting? Below are the two rudbeckia, helping to boost the numbers, ‘Irish Eyes’ and ‘Rustic Dwarf’:

Yet another daisy-style bloom is Calendula ‘Snow Princess’, each bloom varying in the degree of yellowness, but all on the pale side and hence the chilly name: 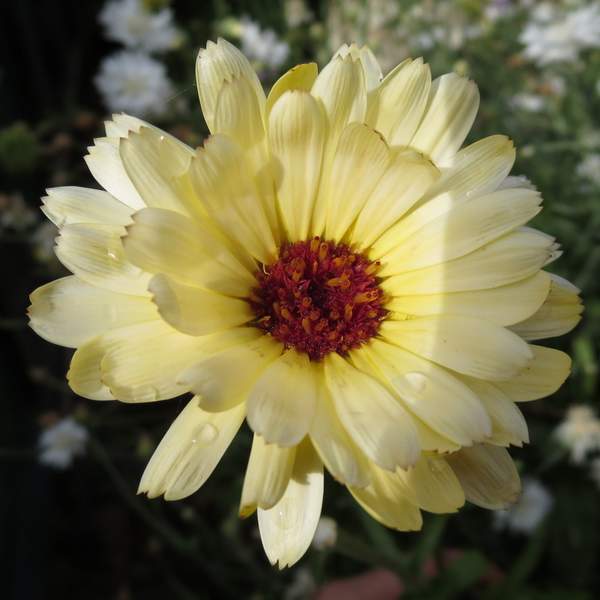 Similarly daisy-like but on a different scale is this unknown dahlia, a remnant of the first dahlias I attempted fairly unsuccessfully to grow. I tend to refer to it as ‘my large yellow dahlia’ but Anna referred to it last week as the ‘twirly peachy one’ making me realise that it is perhaps more peach than yellow, but in my mind it’s still yellow and does sometimes throw up blooms that are a more definite yellow, so it’s being included today, looking both twirly and peachy as well as yellow!

Scraping the barrel, almost literally, for the sixth yellow is a self -seeded nasturtium, growing in an old galvanised bath on top of one of our water butts. The bath was planted with Nasturtium ‘Gleam Blend’ last year and probably got neglected part way through the hot summer, but some still managed to set seed and blooms have been romping up and over our neighbour’s pigeon loft in a raggedy sort of way, still neglected as I hadn’t got round to deciding what to plant there this year and these took me by surprise! 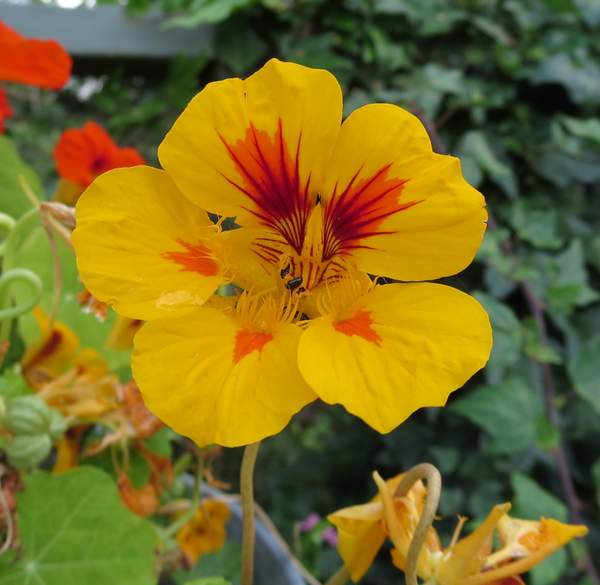 Like Loading...
This entry was posted in cutting beds, dahlias, Gardening, Gardens, Six on Saturday. Bookmark the permalink.

14 Responses to Six on Saturday: Yellows