Today was due to be the first of our three June openings for the National Garden Scheme, cancelled because of Covid 19, so in the absence of visitors I thought I would share some of the things they would have been seeing today, the highlights of the garden. The three clematis featured yesterday as part of Six on Saturday are certainly one of them ( C viticella, left to right, Rosalyn, Margot Koster, Madame Julia Correvan).

Many of the roses have suffered from recent wind and rain, but ‘New Dawn’ is following on from its exuberance last year with a repeat performance, and is a delightful pale pink, not the white it looks in the picture. Behind and above it rambler ‘Rambling Rector’ is still hanging on although impossible to photograph with the sun behind it.

Hostas have stood up fairly well this summer, although needed watering during the dryer months, and are fairly free of slug and snail damage: 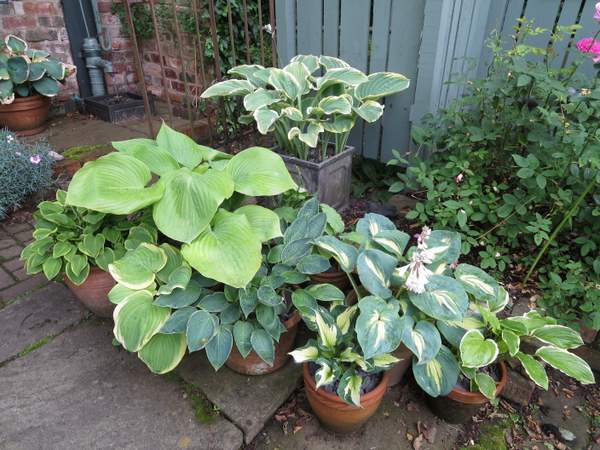 Further down the garden, the little arbour with a bench and mirrored window has looked especially inviting with Strawberry Hill’ clambering over it, settling in well after its introduction a couple of years ago:

Turning 180° to look towards the back of the shed, rambler ‘Rosemarie Viaud’ is at peak flowering stage and is such a pretty shade of purple: 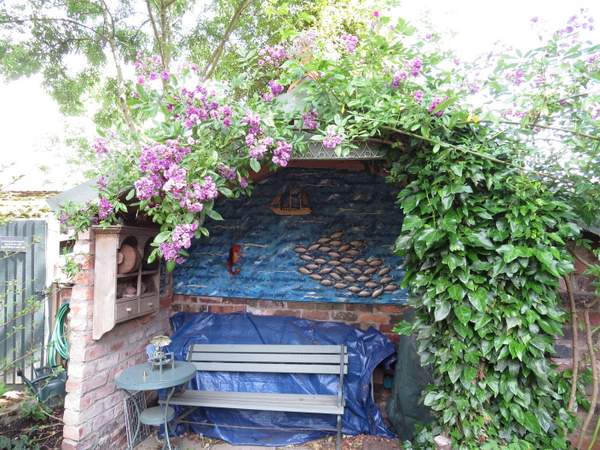 Swivelling round on the same spot visitors would also see the bronze heuchera bed and the Acer griseum, shown often on this blog. The heuchera have all spruced themselves up and filled out as the months have gone on.

In the blue & white border two appropriately coloured aconitum are stunningly in flower and I would normally have hung a little notice on them to warn visitors, informing them they are aconitum (and not delphiniums) and are poisonous. I have mentioned before that I even feel uncomfortable writing about them, which is daft as there will be other poisonous plants in the garden, and am beginning to consider removing them, not just because of their toxicity, but because of their height too, as they dominate the border. They do produce attractive blooms though, especially the blue varieties, and their early spring growth, a shapely feathery mound, is a joy to behold. Sounds like decision time…

Beyond the wall you can see behind them is the fruit cage, the working greenhouse and the cuttings beds. The latter have been fully planted up since mid May and are filling out on a daily basis, with cornflower, cosmos, calendula and sweet peas in bloom, and buds on many more which no doubt will be encouraged to open in the hotter temperatures forecast for midweek. One of the unexpected joys when the cutting beds were first introduced was the pleasure to be gained from the sheer abundance and colour of the contents, no doubt experienced too by any visitors to the garden.

Visitors usually exclaim over the proliferation of allium, whether in fresh or spent bloom form, so they would enjoy these later flowering Allium ‘Miami’ and of course those massive A schubertii: 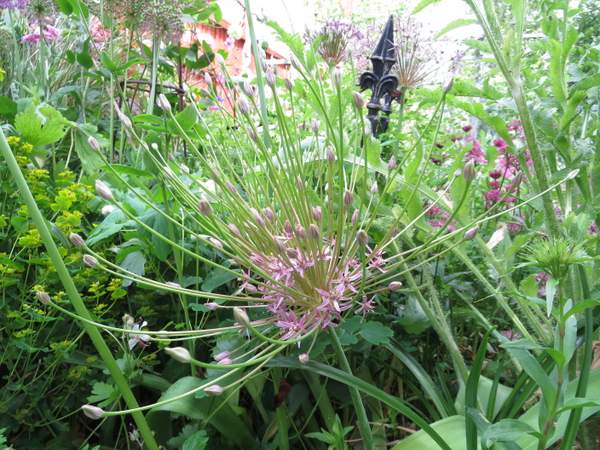 They might also appreciate the scented leaved pelargonium in the Coop, which seem to have responded to being repotted in fresh compost as they are more floriferous than they have ever been. They would certainly have appreciated a cup of tea and a piece of cake too but these like the visitors, were absent from the garden today. 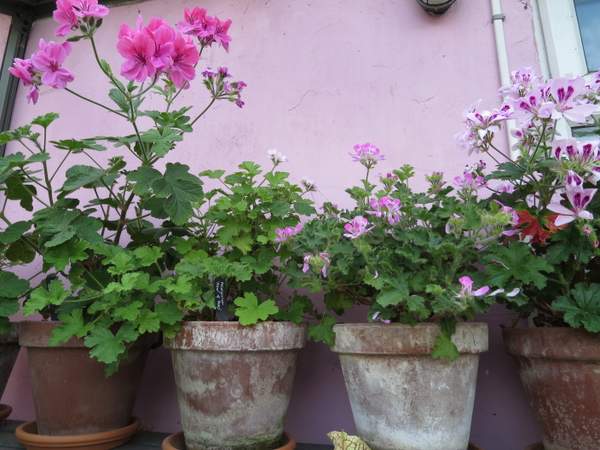 A few NGS gardens are beginning to reopen for visitors with pre-purchased tickets so if you are in the UK please visit the NGS website to see if there are any opening near you – those opening for the coming week will be listed on the website tomorrow (Monday).

Like Loading...
This entry was posted in bulbs, corms and tubers, cutting beds, Gardening, Gardens, herbaceous perennials, Visiting gardens & days out and tagged opening a garden for the NGS. Bookmark the permalink.

20 Responses to Behind the Gate