Six on Saturday: a Good Year for Clematis?

Based on the display of these two and an adjacent clematis, and the number of buds on many more, I wondered if this year was turning out to be an especially good year for them – but when checking previous posts to remind me of the name of one of them I found I had posted equally floriferous pictures last year, albeit about three weeks later, so perhaps not.

Above we have C viticella ‘Rosalyn’ on the left and ‘Margot Koster’ on the right, the former seeming to create a curtain of colour as it hangs down from its support. I am particularly fond of ‘Rosalyn’, with her scruffy and unconventional blooms:

There are four viticella clematis along this pergola, all visible and readily admirable from our kitchen windows. The blooms on ‘Margot Koster'(below) are bigger and brighter, as are those of the more familiar ‘Madame Julia Correvan’ to her right: 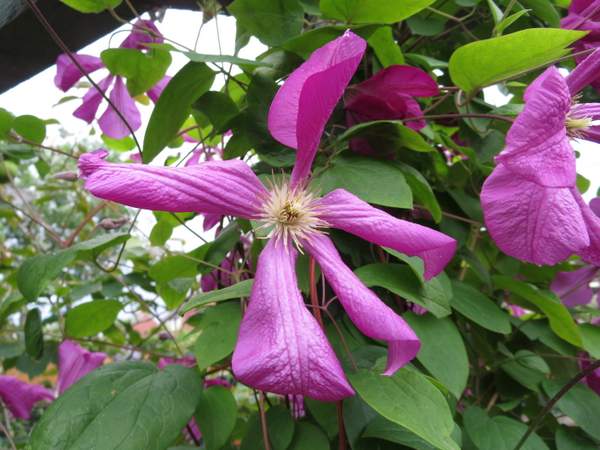 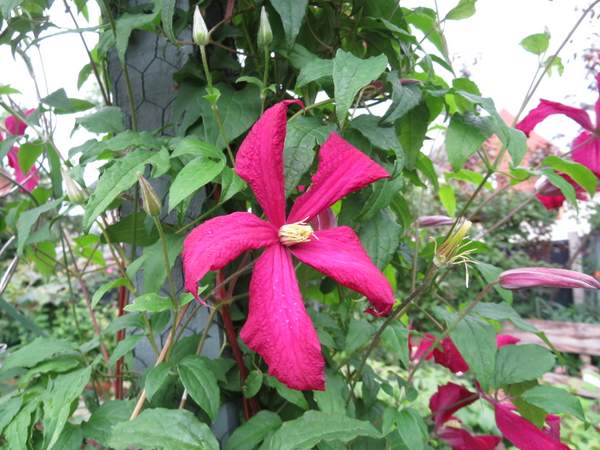 ‘Walenberg’, the fourth clematis on this structure, seems to have had a setback and sports only the tiniest of shoots, but is still alive.

Facing this pergola is another, smaller one, attached to the left hand side of the sitooterie, supporting climbing rose ‘Claire Austin’ and Clematis viticella ‘Blue Angel’. The latter was new for last season and although not quite flowering yet she has romped over the pergola and is covered in buds – she also needs tying in, again! 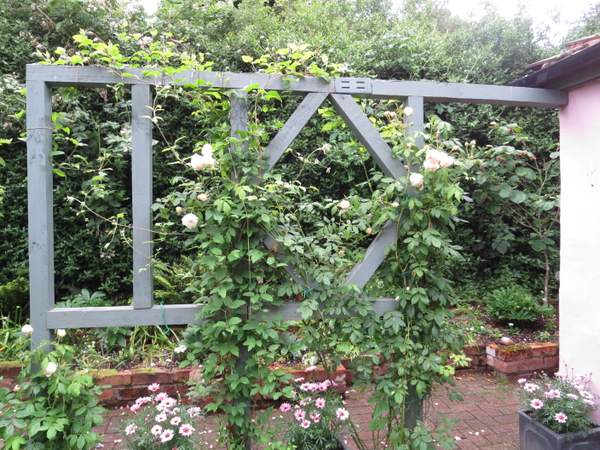 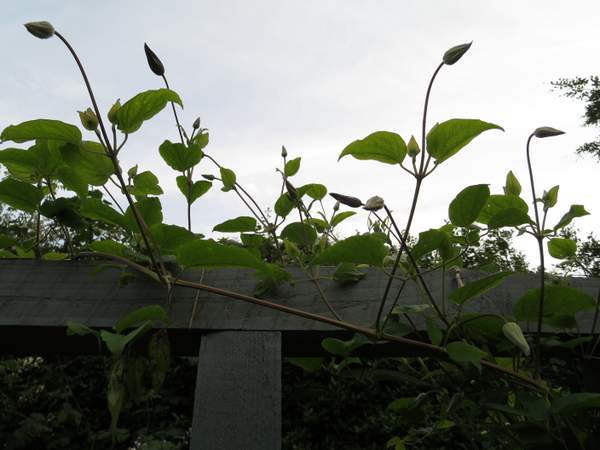 Further down the garden, the Golfer has kindly made some trellis to fit either side of the mirror under the clematis colonnade. Despite still having homes to find for some of the mystery clematis, I decided to move two existing ones instead – ‘Princess Kate’ was sharing a post with ‘Prince George’, whilst ‘Prince William’ was a new acquisition which had been allocated a spot nearby but not on the colonnade itself. Only planted a few weeks ago, the latter would be easy to move, but the former could be more risky.

I had already established that Kate’s new growth was not highly entwined on its support but, having been in situ for three or four years, digging her out could be more problematical and clematis stems are always fragile. However, with a more or less complete rootball and three lengthy stems still intact, the move proved to be surprisingly successful, although the droopy buds later in the day were a concern, largely rectified by a cooler evening and a good watering. There are no buds on William yet, but I don’t doubt that he will be in flower later, beside his wife (both C texensis).

I am sure Kate will be happier here, and in hindsight it was a mistake to have two summer flowering clematis on the same post, especially as Prince George really makes his presence felt, clothing the post with dense foliage which will be smothered in large and attractive ruffled white blooms in due course, as you can surmise from the photo below: 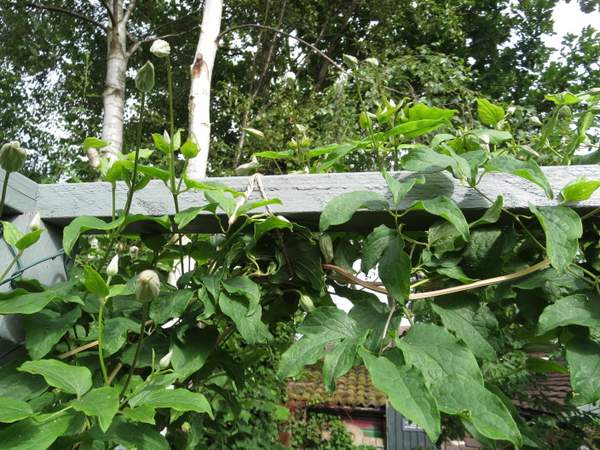 That’s my six (or thereabouts) this Saturday, and if you visit the blog of our SoS host Jon the Propagator you will find many more sixes from around the world.

Like Loading...
This entry was posted in climbers, Gardening, Gardens, Six on Saturday and tagged clematis. Bookmark the permalink.

22 Responses to Six on Saturday: a Good Year for Clematis?