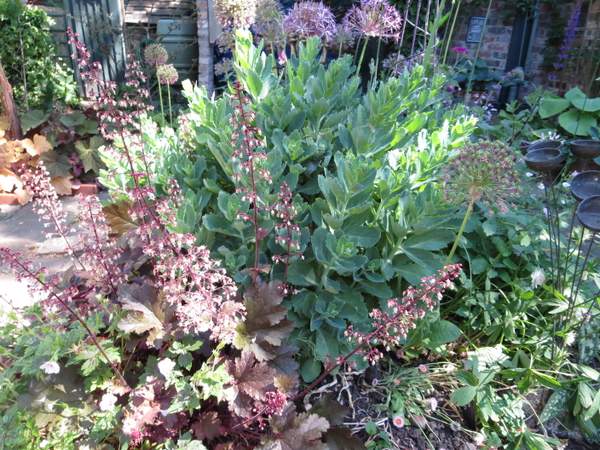 All the gardening experts recommend the ‘Chelsea chop’, cutting back perennials to improve their flowering performance. So called because it is carried out in late May, around the time of the RHS Chelsea Flower Show, it can be done on a wide range of perennials, including phlox, sedum and penstemon. Pruning all the stems on a clump can delay the flowering of perennials by four to six weeks, or just half of them, which spreads the plant’s flowering over a longer period. In both cases, the plants should become bushier and less likely to flop as sedum in particular is wont to do, come early autumn.

I have been aware of this for a number of years but have been reluctant to carry it out, mainly because a nice rounded clump of sedum like the one above, for example, is a thing of beauty, a thing of beauty it seems criminal to deface. However, striving to improve my gardening skills, I knew I should listen to those more experienced, so a couple of years ago I made my first tentative chop – very tentative, as only a few stems were cut – and last year I bravely aimed for perhaps half of them, but my clumps of sedum were still unruly a few months later. This year, without garden visitors expected towards the end of June, it seemed a good opportunity to go the whole way and immerse myself fully in the whole Chelsea chopping experience.

Here is the same sedum after the chop (I wonder if it feels the same as I did when the Golfer cut my hair last week…?):

And a clump of phlox, before and after:

I then chopped around the garden as appropriate, and time will tell if the intervention has made a noticeable difference. When I ran out of choppables, chopping was replaced by trimming and deadheading. In particular, a large Fatsia japonica was slimmed down and the yellowing leaves which seem to appear at this time of year were removed. Twiggy deadwood on an adjacent honeysuckle was also removed, and with the renewed vigour enjoyed by another honeysuckle after it was cut virtually to the ground last year to remove a mammoth aphid infestation, I am now considering doing the same to the others,  rejuvenating them and removing their tangle of woody stems.

But that’s another story, as is what else I saw when atop the ladder…

Like Loading...
This entry was posted in Gardening, Gardens, pruning and tagged Chelsea chop. Bookmark the permalink.

26 Responses to Biting the Bullet