End of Month View: the Darling Blooms of May

Welcome to an end of month view of the garden at the end of May. I took the video and photos of the garden fairly early this morning, to avoid potential extraneous garden noises on the video; sadly, when I came to upload the photographs the contrasts and areas of shade were far greater than I had thought and they were retaken later, but the original video will still be used. Since last month I have experimented with different forms of the latter, but still find that a portrait rather than landscape view works better for our garden; a tablet would give a better display, but my relatively elderly model was not only difficult to comfortably hold steady for the duration, but also couldn’t cope with the sudden variation in light across of the garden. Do let me have your thoughts on this.

It has been a gloriously sunny but very, very dry month and watering has been crucial for the greenhouses, cutting beds, and anything newly planted. The new pipeline to the bottom of the garden with additional taps in between has been a real boon and made regular watering less of a chore. There has been a certain amount of early leaf fall throughout the garden too, with dried leaves being scrunched underfoot like a mini-autumn.

Let’s take a ramble around and see how much it has changed since the end of April, starting with the view above from the back of the house, and the shrub border below. Sadly, I cannot replicate the fragrance in the photos. 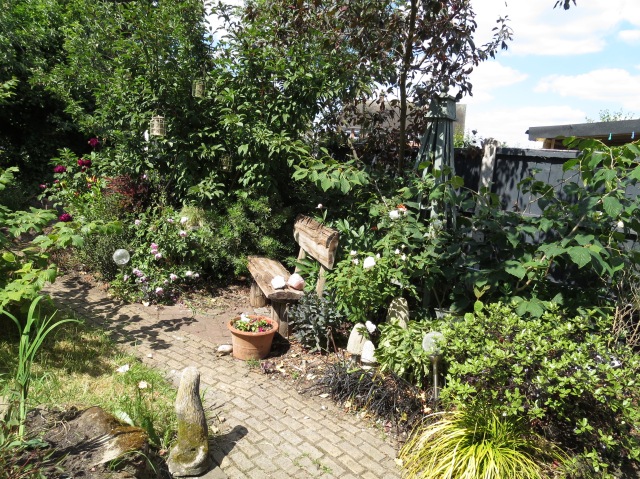 The woodland floor seems desiccated, but the woodland bulbs below will be resting and the primroses should perk up after some rain: 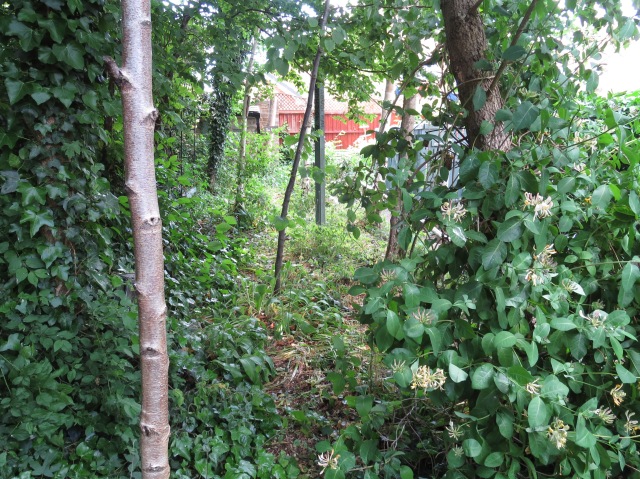 The main herbaceous borders from the bothy, and from ground level: 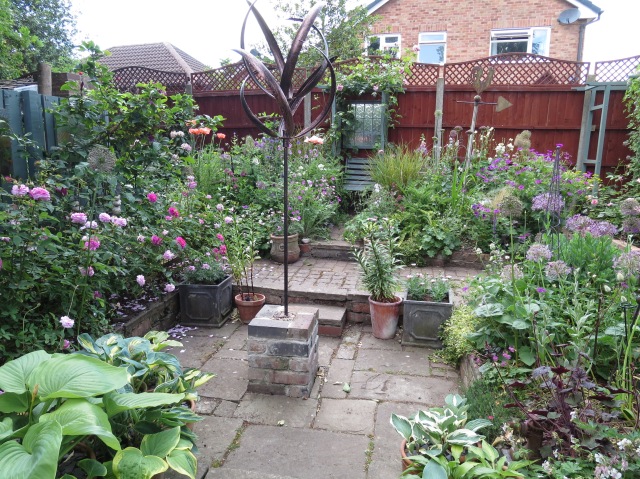 The clematis colonnade, underplanted with roses, and the bronze heuchera bed:

The woodland edge border, also very dry, bringing a speedy end to the rhododendron display for this year: 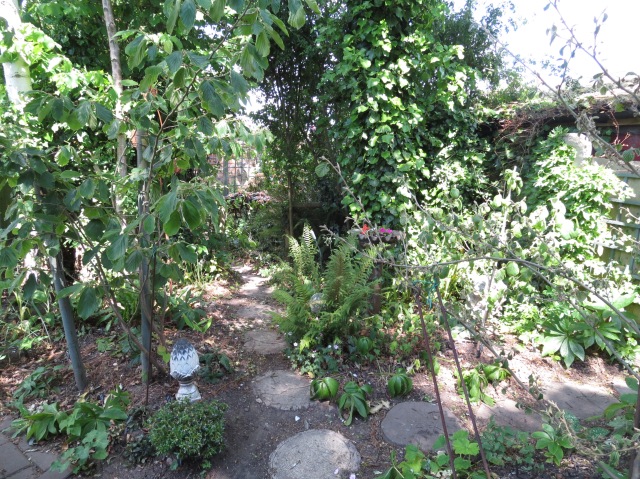 The bold borders, with just a little timid colour to bring some boldness:

Some of the cutting beds, the first with dahlias and sweet peas and the second photo showing the main cutting beds with support netting in place: 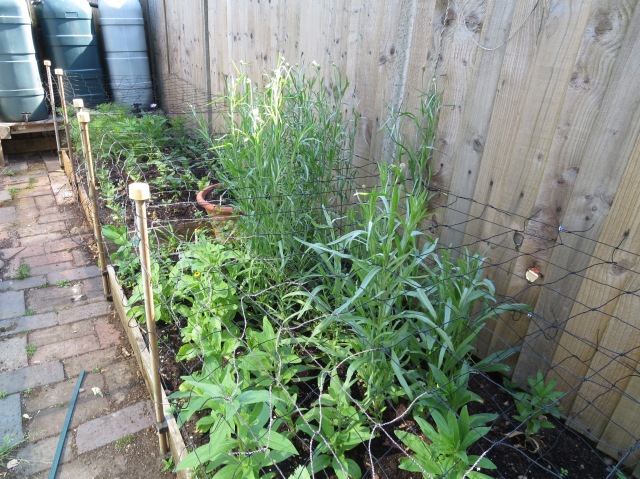 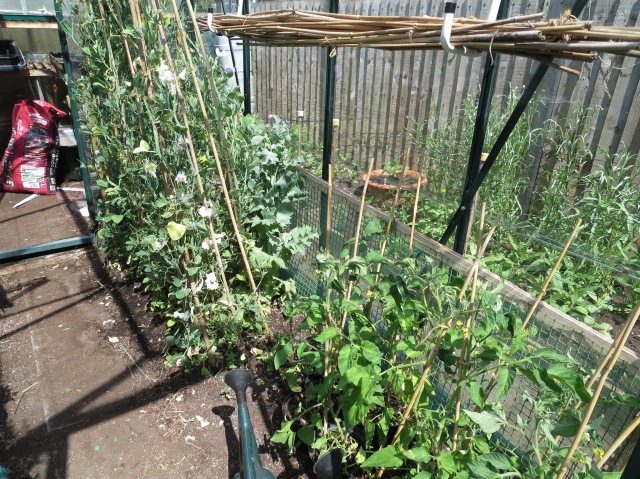 The blue & white borders are dominated by Rosa ‘Snow Goose’ and a VERY tall delphinium!

Pushing myself back against the fence I can show most of the rose garden in this view:

Retracing our steps towards the house to get to the Coop, where the summer bulbs and scented-leaved pelargoniums are building up to a later display… 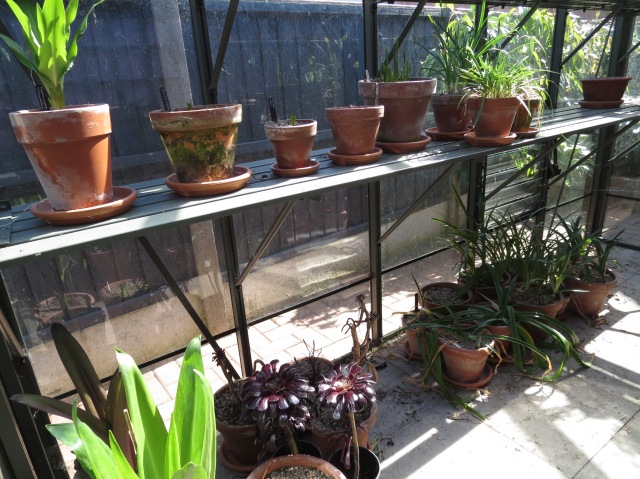 …and down to the Coop Corner and shady courtyard, the latter seeming to be a misnomer as the ferns and hostas have been drooping in the heat: 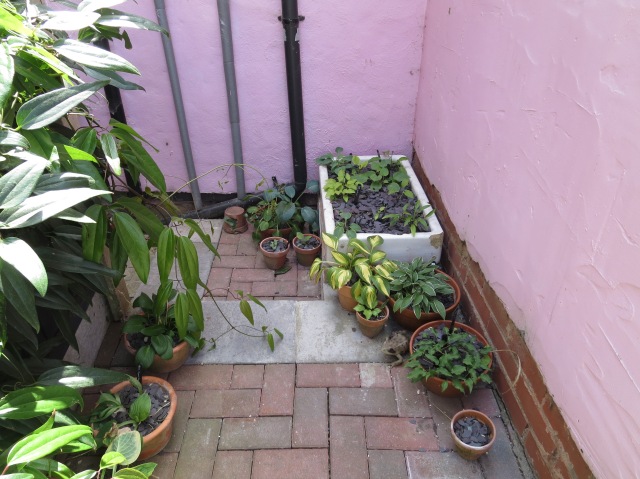 Now, please click on the video link for a more immersive ramble around the garden.

As many of you know, we normally open the garden for the National Garden Scheme in June but, like many others, this will not be happening in 2020 because of Covid-19. Last year the NGS raised over £4 million for charity which will not be possible this year, so when you view my video tours please consider making a donation at ngs.org.uk where you can also make virtual visits to a number of other gardens. Thank you.

24 Responses to End of Month View: the Darling Blooms of May