In a Vase on Monday: the Jewels and the Crown 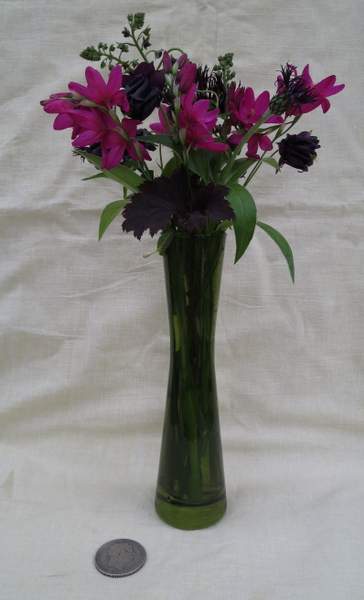 It’s good to use something different in my Monday vases, and today I have snipped stems from Ixia ‘Panorama’, also known as African corn lilies, a half hardy tender bulb that has been overwintered in a pot in the greenhouse. Described as ‘ivory-white with a pink edge and a contrasting magenta eye’, mine were pure magenta from the start and delightfully so; I shall certainly grow them again, whether or not I order fresh bulbs (they were very cheap) or overwinter these. 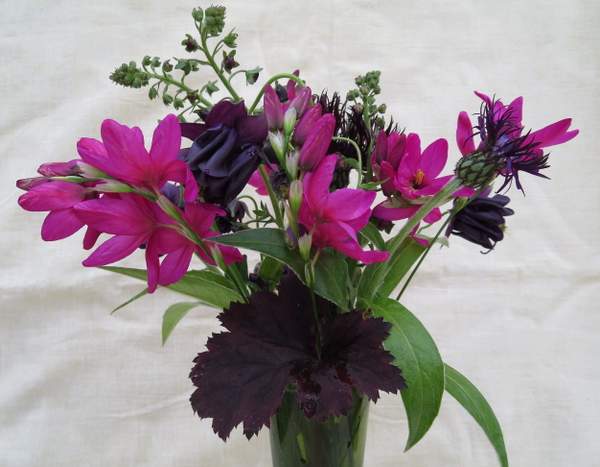 Joining them is another new plant, Verbascum phoeniceum ‘Violetta’, grown from seed, and introduced to me by Sandra of Wild Daffodil (thanks Sandra!). Really easy to grow, it has taken less than 12 months to reach flowering stage and although my plants are still only about 30cms, mature plants can reach about 1 metre. Also in the vase are a dark aquilegia, grown from seed too, Centaurea ‘Jordy’ and a heuchera leaf. They all had long straight stems and I wanted to avoid trimming them too much, so was pleased with the effect of the eventual choice of vase, a tall and slim ‘moss’ coloured Caithness Glass one, which emphasises the bright jewel-like nature of the blooms – glistening like garnets and pink sapphires.

Thinking along the lines of  ‘jewel in the crown’, some sort of crown related prop was required but I drew a blank; not expecting inspiration from the Golfer I asked him anyway, and he was equally blank, denying the likelihood of having any sort of crown, other than those in his coin collection…perfect! His collection of UK coins and banknotes in all denominations includes a number of crowns, and I picked an early George III crown from 1819. Crowns used to be worth five shillings in ‘old money’, the equivalent of 25 pence nowadays, but a standard modern crown, when issued, would cost £5 to purchase and be minted from a cupro-nickel alloy, rather than silver as they originally were.

Have you got any jewels in your garden, I wonder,  that you could pick and pop in a vase today? If you would like to share it with us on IAVOM, please leave the usual links to and from this post. 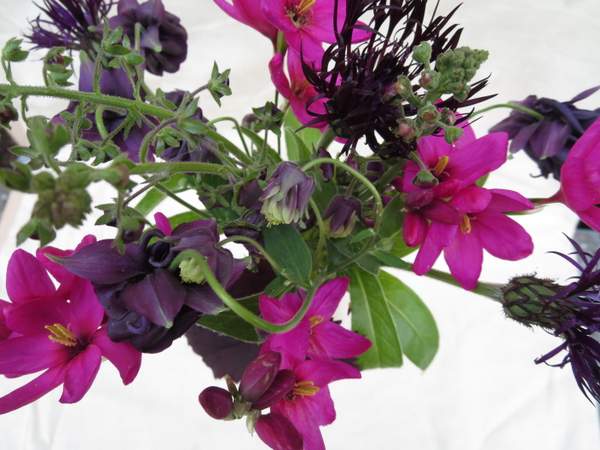 Like Loading...
This entry was posted in Gardening, Gardens, In a Vase on Monday and tagged aquilegia, centaurea, flowers in a vase, ixia, verbascum. Bookmark the permalink.

66 Responses to In a Vase on Monday: the Jewels and the Crown