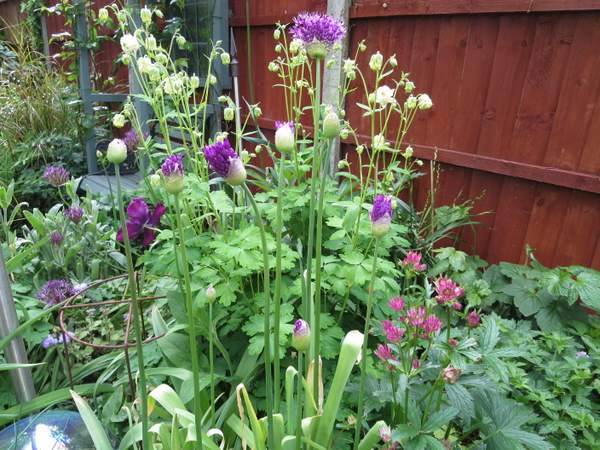 When aquilegia, astrantia and allium, the three As, begin to flower in the borders we know the transition from spring to summer has begun and that the garden has gained an unstoppable momentum. The above photo (coincidentally) shows all three.

The clump of allium in the foreground is probably A atropurpureum but you may be able to spot others beyond it. They all make a great impact in the borders but they do have some irksome downsides – the foliage tends to flop easily, often before flowering, creating unattractive clumps of…well, floppy leaves! They also self-seed prolifically, so the payback for retaining the seedheads as focal points are the inevitable thickets of seedlings in later years, not just in the borders, but in the paths and adjacent borders; unless pulled up when they are young, it is hard to remove the new little bulblet as well as the foliage, so often one just slows its growth a little and a new flower stem will suddenly take you by surprise, rarely in a sensible place:

Aquilegia are also rather profligate, and it pays to deadhead these regularly if you have a number of varieties, as any progeny is unlikely to resemble the parent – which may or may not be a good thing but in the long term they seem to want to revert the common purple A vulgaris. Almost all of mine were grown from seed, mostly bought from specialist Touchwood Aquilegia whose business and Plant Heritage collection sadly imploded after they were hit by aquilegia downy mildew a few years ago. A real tragedy.

Seeds are available from other sources, but not in the huge variety that would be available from a specialist grower. They may take a month to germinate, but are nevertheless easy to grow and I think mine would all have flowered the year after sowing. They never fail to fascinate me with their variation in shape and colour, with their frills and flounces like a Tudor ruff, and their spurs of varying length. Here are just some of mine:

If any appear in a form or colour I don’t like, or that isn’t appropriate for the setting, then I do pull them out, although they might put up a lot of resistance – and it helps reduce cross-pollination too.

Astrantia, however, are better tenants and don’t set seed easily; indeed, some are sterile, which makes for a longer flower period. They can take a few years to get established, after which they will spread slowly until they become congested and would thank you for being divided; they do seem to capture everyone’s hearts, being the one plant all our paying garden visitors have wanted to buy. Sometimes the pinker varieties are more popular, and sometimes the red or the white. I would normally have potted up offshoots by now, ready for plant sales, but there will be none of those this year. Here are four of mine, some still looking rather similar but which will look distinctly different in due course as some of them redden – clockwise from top left are Ruby Wedding, Bloody Mary, Shaggy and Bowl of Beauty:

This year has been throwing up a lot of surprises, things flowering for the first time or putting in an appearance after a long absence, but I don’t suppose there is a consistent reason why although one might assume it is weather-related. Here we have, from left to right, one of several camassia that were planted at least 4 or 5 years ago and had not been seen since, a deep purple rhododendron that was moved from the woodland edge border to the holly bed a year ago and is flowering for the first time, after sulking for years (sadly the label must is no longer evident),  and grown-from-seed (last year) Antirrhinum ‘Liberty Rose Classic’, which successfully overwintered and is in bud again. All very welcome surprises, and they are not the only ones.

As well as admiring the three As and searching for surprises, there have been other more practical tasks taking place, and today I have planted up the two baskets for the front of the house, evicting the previous pansies and narcissi. Last year, I arranged to have my bedding plant plugs in late April, but this year I chose the end of March, which is why they have been romping away and desperate to have more space. I may have to rethink my dates for next year, as it meant space in the working greenhouse was under real pressure; however, I don’t foresee any frosts so the baskets should be OK with their new occupants.

I bought four bags of compost just before Lockdown, but am down to my last one so reused ‘old’ compost for the baskets, having saved that used for sowing and pricking out, rejuvenating it with slow-release fertiliser and water-retaining crystals. As has been the case for many years, the baskets have petunias in three shades of pink/purple, trailing nepeta and trailing lilac lobelia. They just need topping up with a little more compost before being hooked back on the wall.

Another task for this week is setting up support netting for the cutting beds, something I have not done before. There will be 2 horizontal nets, with a 4″ mesh, and the first bed is a bit of an experiment with fastenings, utilising recycled metal posts with a slot cut into them and temporary fixings on the fence, which will be replaced with hooks in due course. The first mesh is about 12″ above ground and the second, to be added later, might be around 30″ but will be a case of trial and error, and together they should obviate the need for haphazard staking as the plants will grow up through it and be supported by the mesh.

So that’s my Six on Saturday – three As, some Surprises and some Useful Jobs. Jon the Propagator will also be sharing his Sixes with us and offering us the chance to share ours with a wider audience, so do check out his blog too.

23 Responses to Six on Saturday: Aquilegia, Astrantia and Allium