End of Month View: April Has NOT Been the Cruellest Month… 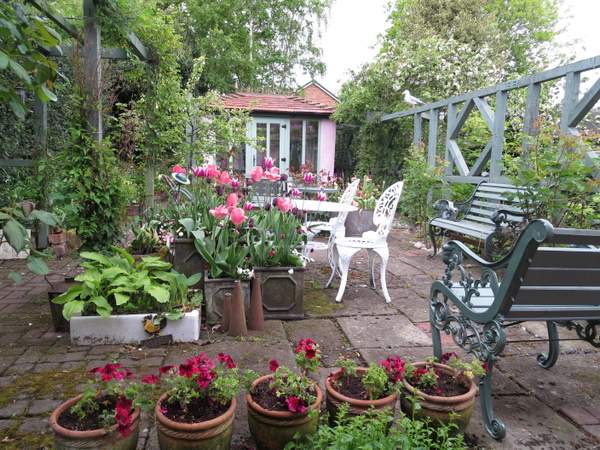 …indeed no, for it has brought us glorious weather, warm and sunny almost from start to finish, with a paltry 5mm of rain early in the month not increasing till this week, when a damp and showery Tuesday took it about 15mm in total for the month. The sunshine coincided with what is normally a fecund month anyway, boosting growth further, and this week’s rain has been the icing on the garden’s cake. Looking at our own weather amateur weather records, April last year was just as dry, but it has been the equally sunniest month since we had our solar panels in 2011.

The garden has changed dramatically since the end of March, as you will see from the pictures and from the video tour at the end of this post. April has been a good month for tulips as shown in the above view from the back of the house, where most of them are, and the rain this week arrived just in time to stop them suffering further from dehydration. There are more pots of them alongside the shrub border which is shown below. You can also see the appleblossom in the top left, much of it now decorating the paths like confetti.

Looking at the same area from the other direction:

The woodland, full of bluebells and wild garlic (sadly, not clear on the photo!) and largely obliterating the path through it:

Looking down onto the main borders from the Bothy, Magnolia ‘Susan’ in full flower on the other side of the fence in the foreground, and alliums, aquilegia and astrantia coming into flower in the borders:

The main borders from ground level, with leafy hostas in the foreground: 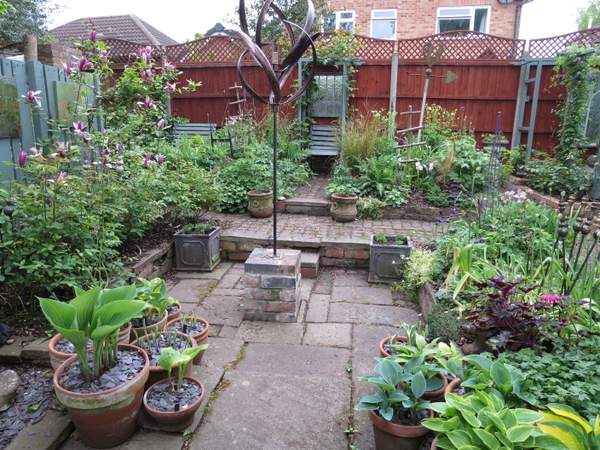 The clematis collonade and bronze heuchera bed; the latter tends to look a little jaded over winter but is perking up nicely now:

The walk through the woodland edge border, with only foliage as evidence of the common snowdrops that filled it not so long ago. The hellebores are over too but their faded flowers will provide interest for a while yet before being cut back:

At the other end of this border the rhododendrons are beginning to bloom, preparing their contribution to the tapestry of form and colour that this area provides in May and early June: 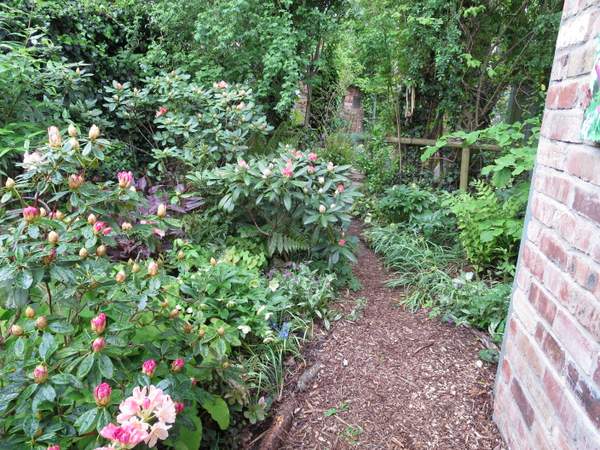 No flowers in the bold borders yet, but they too are filling out, boosted by the addition of some annuals: 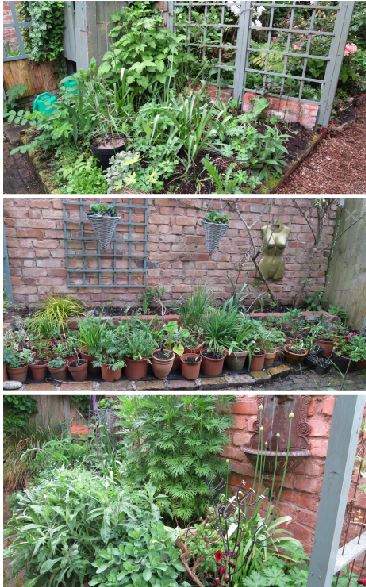 Through the gate, some of the dahlias were ready to be planted out in the newest cutting beds, and sweet peas are slowly becoming established on their supports… 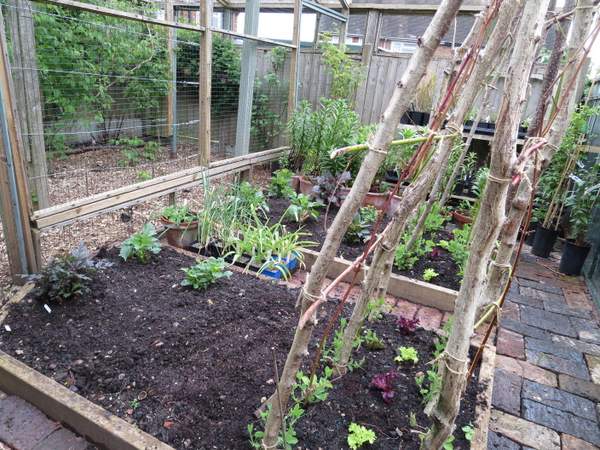 …and the first annuals have been planted in the other cutting beds, taking advantage of the week’s rain to settle them in:

This means less pressure in the working greenhouse, but there are still some seedlings bulking up, as well as all the bought-in plug plants destined for pots and the winter flowering sweet peas (where there are now nearly enough blooms for a small posy): 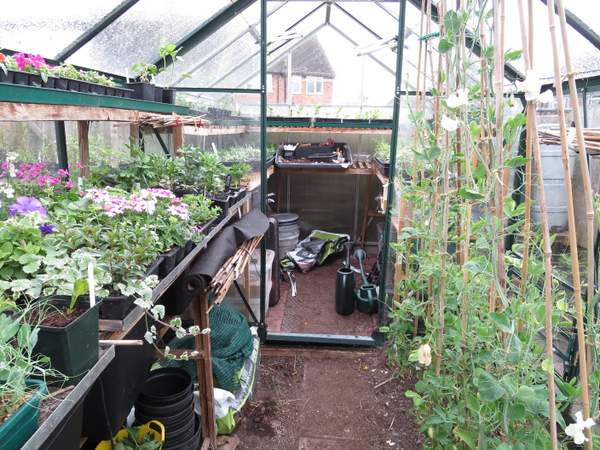 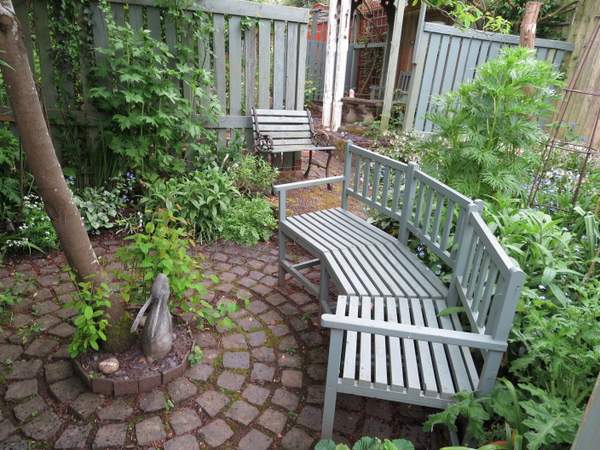 …through the rose garden, where all the roses are in bud

…under the clematis colonnade and down past the snowdrop border, with faded hellebores holding the fort until the snowdrop foliage is cleared and white bedding plants are added:

… and just a quick peek at the wisteria, usually not in full flower until the end of May but beginning to colour up a little already; having made a point of tidying some of its uglier knobbly stems as part of the winter prune, I may have inadvertently hampered its flowering potential but I am confident it will bounce back again another year: 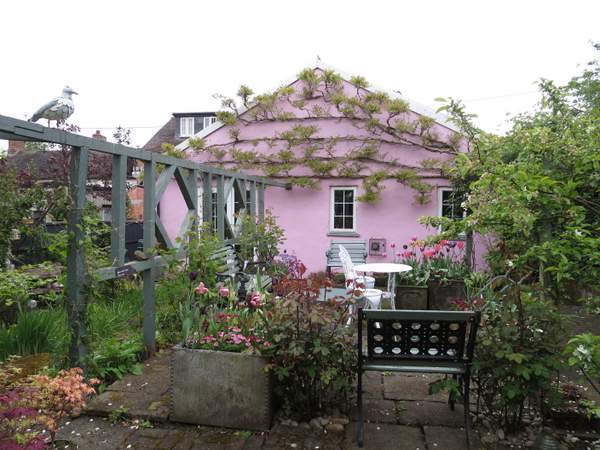 Let’s go down one side of the house and see more hostas, still looking pristine: 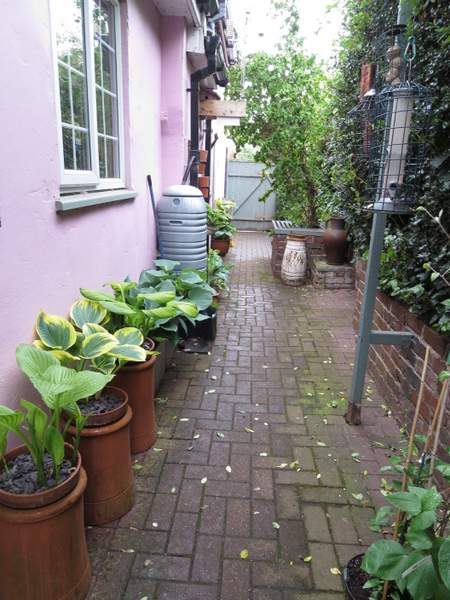 …and down the other, first to look in the Coop, which is very much emptier than last month:

…and then to the leafy Coop Corner with the scaffolding still there, presumably here till post Covid-19. See how luxurious the foliage is on the two hellebores at the front of the bed!

Finally, sitting tight amidst the scaffolding, are the mini hostas, currently rather neglected because of the reduced accessibility to this corner:

Now that you have a rough idea of what the garden is looking like at the end of April, why don’t you click here and have a personal guided video tour? Don’t forget, if you are unsure of how it all fits together, there is a map to help you under The Garden tab above.

Like Loading...
This entry was posted in End of Month View, Gardening, Gardens and tagged video garden tour. Bookmark the permalink.

13 Responses to End of Month View: April Has NOT Been the Cruellest Month…