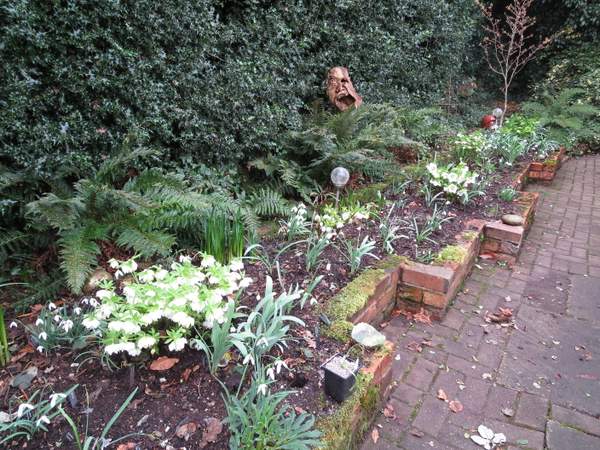 Thank you all for your good wishes on our first early opening for the National Garden Scheme. After storm Ciara had passed over people said we were lucky it wasn’t that weekend we were opening – we knew nothing at that point about Dennis nipping at her tail! It was always going to be a risk opening the garden to visitors in February, but access around our garden is relatively easy whatever the weather, and we would only have cancelled the opening if we were covered in snow. One thing we have learned from the event, however, is that there will always be people who want to visit a garden, even in inclement weather.

Like our first opening, back in June 2017, potential visitor numbers was the Big Unknown, although we can say in hindsight that for all our June openings numbers, although variable, have been in the same sort of range. We are perhaps a little on a limb relative to the largest centres of population, and although in a village we are still only 2 or 3 miles away from our nearest small town and road access is good. A February opening is something different though, as people have largely been starved of open gardens for a number of months, and we all know that snowdrops can be a big draw – not that we hankered after huge numbers, as parking is limited. My cakemaking, however, allowed for more potential visitors than we might comfortably have coped with, in an effort to ensure we did not commit the ultimate sin of open gardens…running out of cake!

Having watched the weather forecast change continuously over the preceding fortnight, it eventually became clear that we would not be escaping Storm Dennis and his troop of rain and wind. As everything was prepared and ready there was no merit in doing anything other than going ahead, but we did have a few phonecalls and emails (including – hopefully? – from our helpers) to check we were still opening, confirming there were some people still willing to visit despite the weather. Saturday was a gusty day but with only occasional rain, and miraculously the wind dropped by Sunday, but not without an inch of rain overnight.

Sunday began with a heavy but short shower but for the next few hours the rain was fairly light and although it was fairly chilly there were 21 visitors who felt it was still worth coming out. The Golfer made a quick foray before we opened to check for flooding, and found roads flooded in two directions, but the main access still clear. During the day we heard of further flooding on other potential routes, so in many ways it was a miracle we had any visitors at all, especially as it was inevitable the main route would be flooded later (usually the day after heavy rain). It is nothing like the scale of flooding experienced by Yorkshire and areas around the River Severn, I hasten to add, and unlikely to affect any properties, so we are fortunate in that respect.

21 visitors might not sound many (and I agreed that 2 others could visit on Monday, so 23 in total), but with tea and cake, plants and selling various vaguely garden-related things that were surplus to requirements and would otherwise have gone to some other charity, we took around £300, which was pretty remarkable in the circumstances, and the majority of this will go to the National Garden Scheme charities. And the 23 visitors. most of whom who had not been before, enjoyed themselves and appreciated just how much there could be of interest in a garden in February – as always, it is a joy to know that people can find ideas to take away with them and consider for their own garden, whether it be plants or features.

So, overall a relative success (although we could have done without the weather angst!). And there is also the knock-on benefit of getting the low season jobs out of the way, so we can now reap the visual benefits of the garden’s tidiness over a longer period – unless I dream up another new project before the summer! One thing I will probably do differently next time relates to the range of plants for sale – as well as named and common snowdrops, I bought and potted up crocus, muscari and iris bulbs but very few of these sold. It cost little to buy the bulbs and, like any unsold snowdrops, they can be planted out in the garden instead so there is no real loss there, other than time spent potting them up. However, with signage to dismantle and put away and the house to put back in order after the upheaval, it will otherwise be a relatively ‘lazy week’ and the bulb planting can wait! 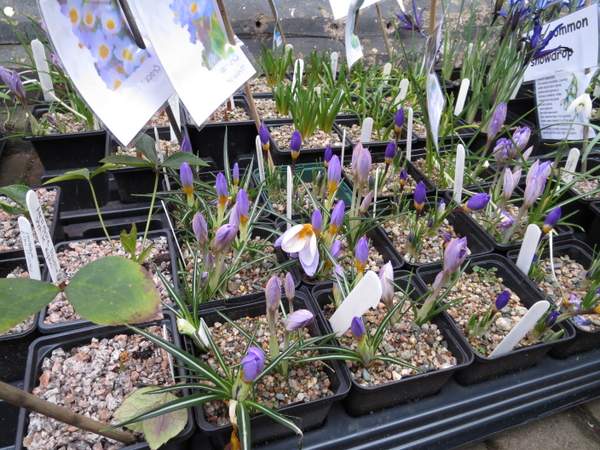 Like Loading...
This entry was posted in Gardening, Gardens, open gardens and tagged opening a garden for the NGS. Bookmark the permalink.

27 Responses to Braving the Elements