In a Vase on Monday: Jewels

How often do I have to photograph my Monday vase inside? VERY rarely, but yesterday was one of them and I apologise for the substandard photograph above. Non-stop light rain on Saturday was followed by non-stop heavier rain yesterday and although I was already soaked picking blooms for the vase I declined to get any wetter by photographing them outside. I am not complaining about the rain which is gratefully received, even though it meant little gardening being done this last week – firstly due to the heat and then to the rain. That’s British gardening for you!

Fortunately the view from above gives a better picture of the contents of the vase, their jewel-like colours placed in a pewter-effect Prinknash Pottery jug. A range of zinnias (Benary Giant Mix, Purple Prince and Art Deco Mix), my best ever showing now they have a bed almost of their own and sown in early February and mid March, earlier than many would recommend, are joined by Antirrhinum ”Liberty Classic Rose Pink’, another successful first for a taller snapdragon, and seedheads of nigella. Even the nigella was a success for the first time, so I must be doing something right! The rain had weighed down the heads of antirrhinum and before I could fill the jug I found myself doing a repair job with a section of wooden coffee stirrer and some florists’ tape, but it did the trick. 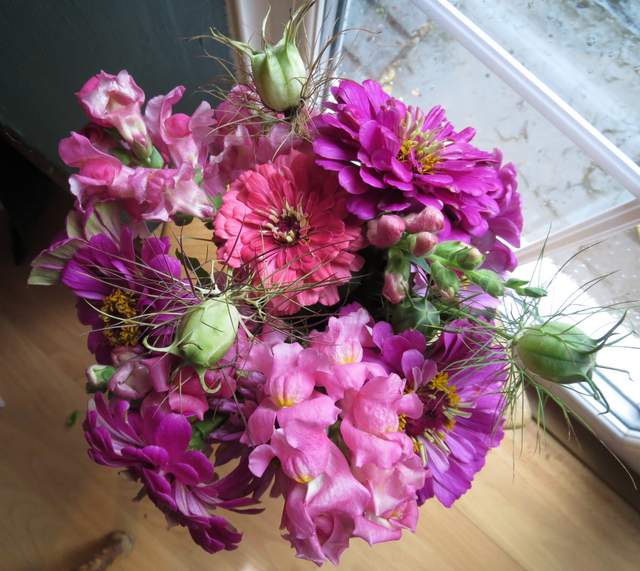 In the absence of any jewels of my own, another spot of DIY produced a crown from thin card and aluminium foil instead of crown jewels, but perhaps I needn’t have bothered as the similarity of nigella heads to crowns suddenly became apparent as I trailed the vase around the house looking for the lightest spot on this downright dull-but-not-dismal day.

I hope some of you will still feel it is worthwhile facing the heat or the rain for the time it takes to pick some blooms or other material to create a Monday vase; I may have got soaked, but I am now delighting in my crown jewels which will bring joy throughout the week whatever the weather does and whether or not I am able to get out and do some gardening. Just leave links to and from this post if you too would like to share a vase with the rest of us.

Like Loading...
This entry was posted in cutting beds, Gardening, Gardens, In a Vase on Monday, seed sowing and tagged flowers in a vase. Bookmark the permalink.

45 Responses to In a Vase on Monday: Jewels