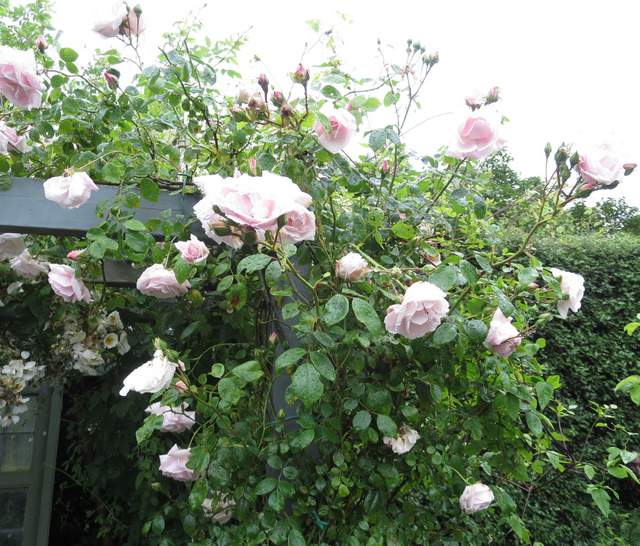 If I were to use visitor comments from our open garden sessions to gauge what the top blooms are in the garden at the moment it would be (not in any particular order) roses, poppies, astrantia and Lagurus ovatus (bunny tails), with R ‘Munstead Wood’ being the most asked about, leading at least one visitor to go home and order it for herself. My own choices would inevitably be more subjective, as they would not be dependent purely on their current impact but on their relative performance over time and no doubt a host of other subtle factors.

I couldn’t possibly pick out a specific ten to meet the nominal requirements of Chloris’ monthly meme because, as she herself says, there are just far too many to mention, so this post features just a selection, starting with ‘New Dawn’ above. Trained against a post of the arbour that supports ‘Rambling Rector’, this rose has put on a real spurt this year, clothing her corner with pretty soft pink blooms and readily visible from the kitchen windows. Also in view are the gloriously perfect apricot blooms of ‘Crown Princess Margarita’, on two pillars at the other end of the arbour: 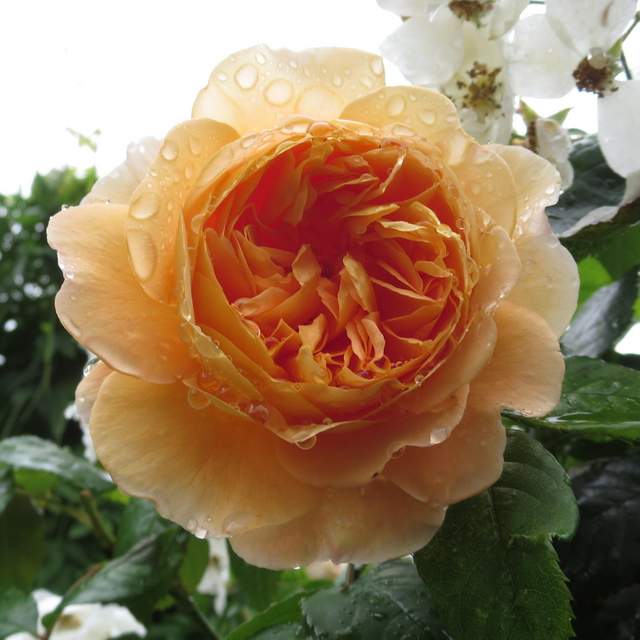 New in August last year is another climbing rose, ‘Claire Austin’, on a specially constructed new pergola outside the sitooterie, also in my line of sight. The opening blooms are a froth of incurved petals which always make me think of swan feathers – on a dry day I like to bury my nose into the middle of them but was less tempted in today’s almost endless rain. One of  a pair, the second Claire has proved to be an imposter, producing a range of blooms from pink-tinged white to cream, apricot and pure pink which David Austin has declared to be a sport and sent me a ‘genuine’ Claire to replace it: 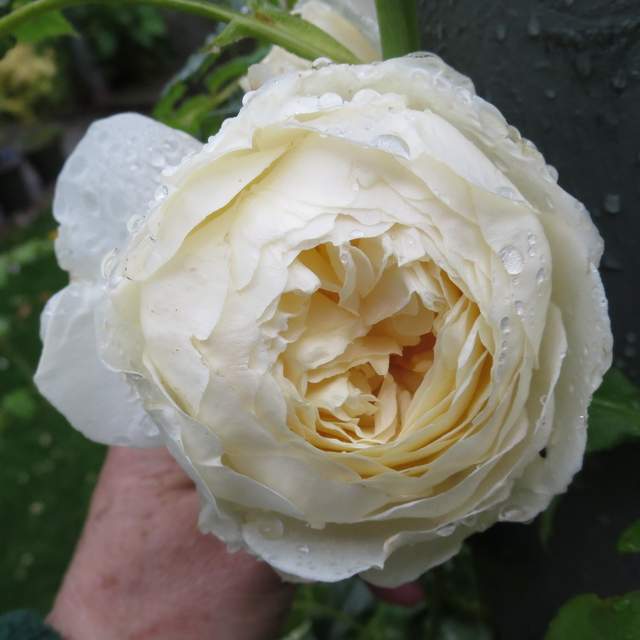 My relocated Gertrude Jekyll continues to impress with its delightful blooms, albeit only a handful: 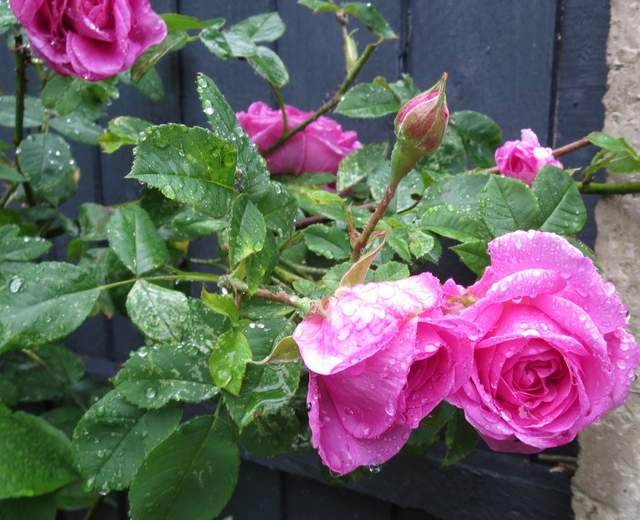 After many requests last year, I potted up more than a dozen offsets of Astrantia ‘ Ruby Wedding’ and grew them on for sale this year, but could easily have sold two or three times that number of any astrantia: lesson learned! Here we have (clockwise from top left) A ‘Buckland’, A maxima, A ‘Ruby Wedding’ and A ‘Roma’ 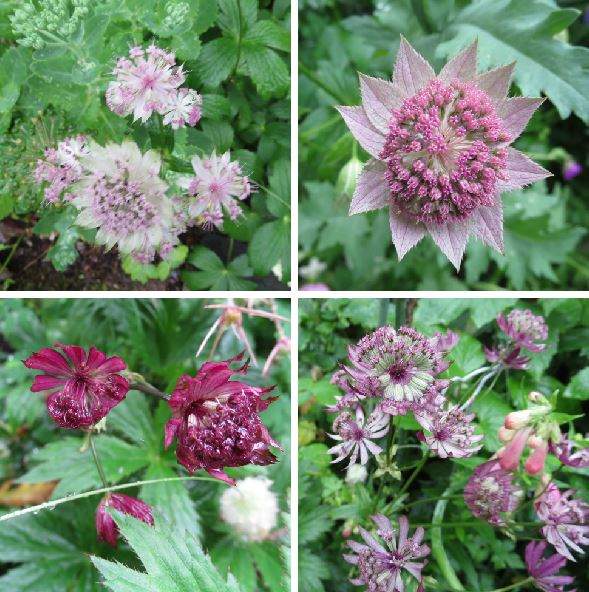 It was too wet to scrabble around to check labels, but here is an astrantia with two of my other favourites, Lychnis coronaria and Geranium magnificum, and with Allium ‘Mohican’ in the second photograph: 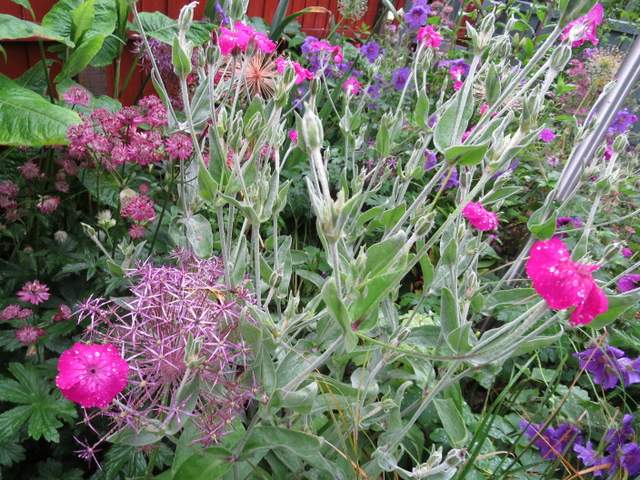 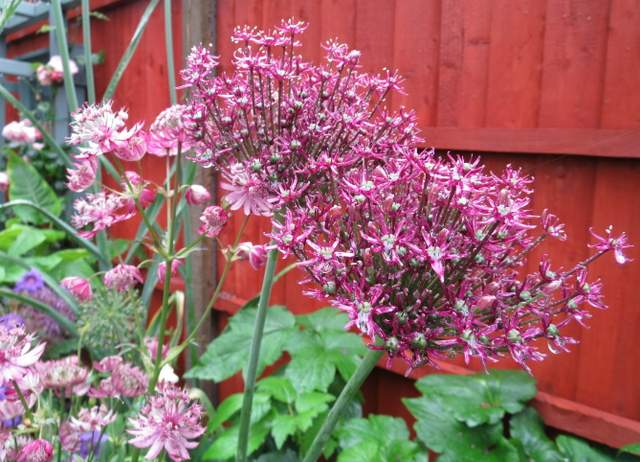 Clematis are just coming into their own now and in a few weeks could command a whole post to themselves if the number of buds is anything to go by. For today though we just have four to enjoy (clockwise from top left): C lost label, C viticella ‘Margot Kostner’, C viticella ‘Rosalyn’, C viticella Pernille 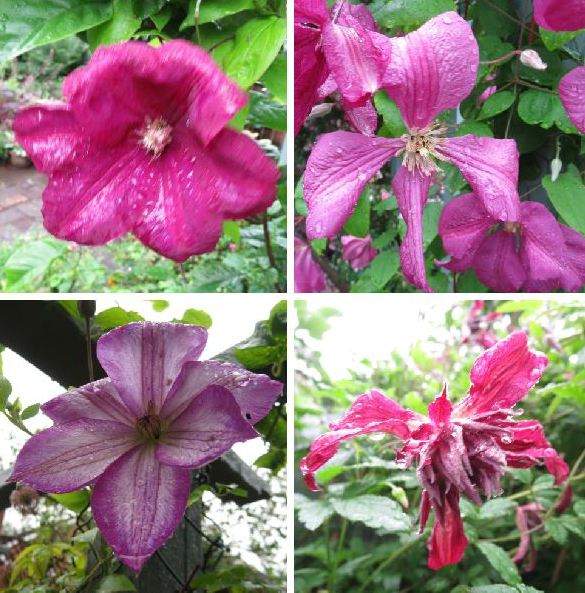 The rain did not stop me from enjoying my favourite June blooms but it did snap off some of the heavier blooms and removed a large quantity of petals….hey ho! at least I haven’t had to water any of the borders this week!

Thank you to Chloris for hosting this meme and do pop over to her blog where she shares more of her vast range of plants as well as her extensive knowledge of all things plant related.