I am starting with the above photograph for the benefit of our Six on Saturday host, Jon the Propagator, who has been disappointed that the lower branches of his wisteria have not been flowering. Our wisteria is trained over the back of the house but one branch has been taken round the corner and over the back door at the side of the house; trained this way perhaps 10 years ago this branch has only once produced any blooms, and I recall this was merely a single truss. This year, however, the whole branch is smothered in swelling buds, the like of which has never been seen before, not surprisingly bringing me Great Pleasure.

Also bringing Great Pleasure is the semi-shaded border behind the Coop; this was created as part of the Greater Coop Plan, so has only been in existence for a year, but it has filled out nicely and the mounds of foliage are most pleasing. I am especially taken with a green heuchera and a tellima, both moved from the special snowdrop border and both bursting with health and vigour – the conditions must suit them.

Also bringing immense pleasure but deserving to be on of the Six on its own is the Greenhouse, the working one, which after collecting bedding plants for my tubs and baskets from Brookside Nursery during the week is now officially FULL! If I hadn’t shunted as much as I could outside to harden off it would have been overflowing, but I have worked hard to keep on top of the whole process, and out of curiosity I totted up the contents as of today:

OK, I agree that sounds a lot – but they won’t be wasted, honest! 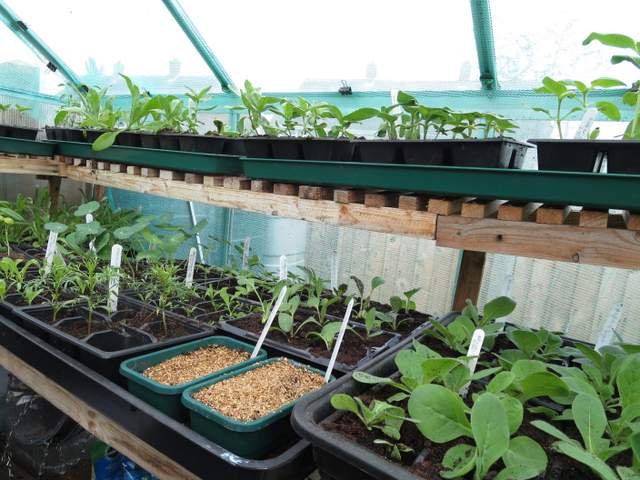 As part of the process of creating enough space in the greenhouse to accommodate the bedding plants, I finally succumbed to planting out some of the oldest seedlings  – and some of the dahlias. Having checked in my records, last year I didn’t plant anything in the cutting beds till the middle of May although one year some things were planted out in the first week; deciding I was big enough (metaphorically speaking) to make my own decisions based on good judgement and experience, the most advanced dahlias were planted out in the cutting beds yesterday and joined by the first seedlings, cosmos, clary and dwarf sunflowers. Up to now, the cutting beds have been serving as a holding area for hardening off seedlings but are emptying as I plant out as much as I can, when I can – not just in the cutting beds but in the borders too, with well established cosmos and annual grasses finding a new home now the ground is damper and more hospitable. 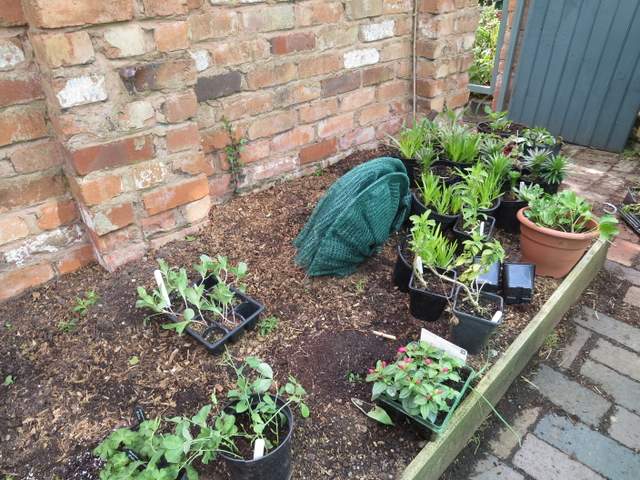 So if  #3 was the Cutting Beds,  #4 must be Roses. Having added so many roses since last year it is pleasing to see how well they are settling in. The border below, originally one of the 4 main herbaceous beds, was planted with England’s Rose and The Mayflower roses in autumn, and it is good to see how the bushes are already growing into each other, hopefully producing an amorphous clump of dark and light pink roses in a couple of months. The lower picture shows one of the low growing roses under the clematis colonnade, Baby Faurax which, like of all the new roses here, is a mass of buds – and the race is on, to see which flowers first! Sadly, there also seems to be a race to see which is covered in the most greenfly, which seem to be particularly prevalent this year.

The last two of the Six on Saturday are intertwined, Projects and Quirk. Visitors and regular readers would describe the garden as quirky and I am always on the lookout for more ways to add to the quirkiness. The first car boot sale visit of the year produced some interesting bits that will find a place in the garden, as well as some vintage clay pots:

The vintage roller, an auction buy from many years ago, has finally got new handles, courtesy of the Golfer’s turning skills, which will need to be painted before they can be considered ‘finished’; the mangle, however, is no further on as the broken pottery I was going to use to ’tile’ the top has proved to be unsuitable. Undaunted, I have a box of mosaic tiles left from a previous project and this is now on my To Do list instead.

With our open garden dates only 7-8 weeks away, keeping on top of all the tasks (whether routine or improvements), is paramount, and starting New Projects is not to be recommended unless they are small ones like the roller and mangle or another little wall to highlight the open frogs you find in some bricks, which can be used for planting succulents and the like: 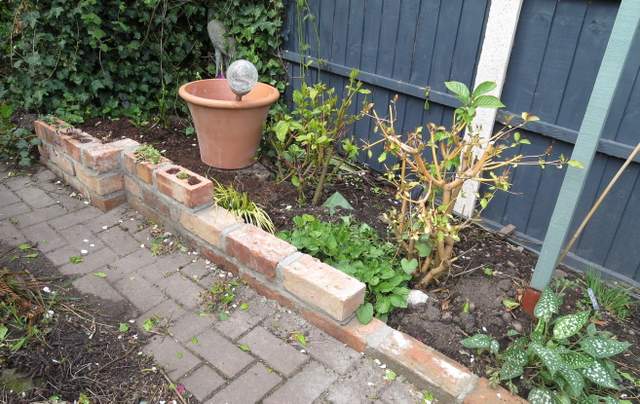 So that’s my six for today: thank you to Jon for hosting and please check out his blog for other Sixes on Saturday.

Like Loading...
This entry was posted in art in the garden, cutting beds, dahlias, Gardening, Gardens, greenhouse, projects, Recycling, Six on Saturday and tagged Brookside Nursery. Bookmark the permalink.