In a Vase on Monday: Airy Fairy

We were to be away over the weekend and my Monday vase, instead of being put together on Sunday, was created on Thursday and the posy given to a friend so she could appreciate the sweet peas. It would have been a shame for their scent to languish in our absence, enjoyed only by this fairy chicken (yes, I know!) and the other contents of my chicken shelves (mostly egg cups) from whence she came. 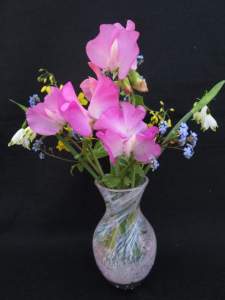 The sweet peas are the first of the Winter Sunshine varieties to flower. Sown in October and planted out in the greenhouse in January they are bred to flower in lower light conditions – so not strictly ‘winter’, just ‘early’ – and need to be grown under cover. My neighbour, with whom I shared seeds this year, has risked planting his outside which I feel is a mistake but having emphasised that they need to be grown inside it is his choice to ignore that advice. On warmer days this last week the typical sweet pea fragrance was beginning to make itself known and as more blooms appear the working greenhouse will take over from the Coop as the scented focal point of the garden.

Fresh and delicate and colourful in appearance, some airy-fairy companions seemed appropriate partners for the sweet peas, so they were joined by Brunnera ‘Jack Frost’, recently uncovered Epimedium ‘Frohnleiten’ enjoying the exposure after having the old foliage removed, dangly Leucojum aestivum ‘Gravetye Giant’ and an ever-useful arum leaf. The arum leaf was not from the A italicum ‘Marmoratum’ outside the back door, but a smaller leaved variety that has been in the woodland edge border since its inception and which doesn’t have Marmoratum’s distinctive berries: I daresay there is a label somewhere within the clump. The blooms were temporarily popped into one of my many Caithness Glass vases before being passed onto my friend, and the chicken fairy (which presumably came with an Easter egg in tow) flew back onto her shelf.

Perhaps some of us might come up with an Easter themed vase next week? I know a certain blogger has at least one egg-shaped vase which might be shared with us on seasonal occasions such as this, but despite periodic searches on eBay I have not yet come up with one to add to my own collection. Ah well, at least I know can do something with chickens… But that’s next week – what will be in your vases today? I look forward to seeing them if you choose to share them by adding the usual links to and from this post.

Like Loading...
This entry was posted in Gardening, Gardens, In a Vase on Monday and tagged Winter Sunshine sweet peas. Bookmark the permalink.

51 Responses to In a Vase on Monday: Airy Fairy