Today is the 7th anniversary of Rambling Round the Garden… good grief! where have those seven years gone?! As far as blogging goes, they have flashed by without any hitches or itches, although after posting every day for the first two years I did take myself in hand and reduce the number of posts which had become longer and chattier and were beginning to take over my life. Now I post as and when there is something I want to say or show but always, of course, on a Monday for my IAVOM meme which was hatched in November 2014 and has a birthday of its own.

The blog has dutifully served, as originally intended, to record progress in the garden and I often refer back to earlier posts to find out when something was first planted, when it flowered or sometimes what it was called, so I find the ‘search’ button invaluable as I do the ability to search by month or category. If you don’t have these on your own blog already I can heartily recommend them, for your own use and for other readers as I periodically search other blogs for something I want to re-read or check up on. The blog also triggers the occasional poem, although not as often as I had hoped because my muse is on part-time hours only.

It has also enhanced my gardening knowledge hugely – of plants, of practices and of gardens – but even more importantly it has made me intimately acquainted with my own garden, forging a deep and symbiotic bond and an intuitive understanding of what makes it tick. This has all been encouraged and boosted by the support of my numerous and varied blogging friends, the unexpected bonus that blogging provides (certainly within the garden blogging community), without whom my life and my garden would have been very much poorer. I use the word ‘friend’ in its real sense as the bonds that have been formed are very real, despite the distances between many of us; distances, however, have not been so great as to prevent some of us meeting up and so far I have met 17 of these special friends, mostly on their home territory. Such a joy: not just friendship but wisdom, support and a steady and generous supply of seeds, cuttings and plants!

None of the little snippets making up the 7 of the opening photo have come from blogging friends; instead they were all chosen because they haven’t yet featured in a vase this year. This ‘flat lay’ shows them more clearly. We have:
top row: Hellebore ‘Ashwood Single White Picotee Dark Ovaries’ (Ashwood are not very emotional when naming their hellebores), a recycled narcissus from one of last year’s baskets (probably N ‘Rip Van Winkle’), a fancy primula from the Coop, Pulmonaria ‘Trevi Fountain’, native primrose
middle: Camellia ‘Nobilissima’ (planted in completely the wrong place even this one bloom is a miracle), Corydalis ‘G P Baker’, species Tulipa ‘Turkestanica’, blue Anemone blanda, Brunnera ‘Jack Frost’
bottom: recycled pink hyacinth, seemingly perpetually flowering Veronica peduncularis ‘Georgia Blue‘, the first Bellis perennis, ditto Fritillaria meleagris, Scilla siberica ‘Alba’

Last year’s anniversary fell on a Monday and the blog’s birthday vase, comprising 6 cardboard cut outs of my rose and peony gravatar attached to cornus stems, is still sitting on the dresser in the kitchen, looking pretty much the same apart from a layer of dust. Today’s blooms won’t last as long but they were still popped into a little vintage creamware pot (when they had finished posing and lying around) where they will give pleasure for a few days; the pleasure brought by this blog and my blogging friends, however, will last much longer, so thank you everyone for rambling in the garden with me. 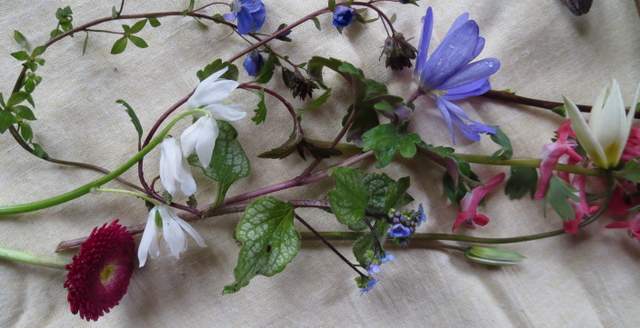 Like Loading...
This entry was posted in garden blogs, Gardening, Gardens and tagged blogging anniversary, blogging friends. Bookmark the permalink.

41 Responses to Without An ‘Itch