I have not participated in Jon The Propagator’s Six on Saturday meme before, but seem to be especially time poor at the moment and the format seemed a good way of keeping the momentum going when I don’t have time to write at any length. My six can loosely be tied into a reduce, reuse, recycle category (some more loosely than others), something I have aspired to for many years, ever since collecting foil in the 60s ‘for the guide dogs’.

Regular readers will know how much I love my bricklaying and above you can see a motley pile of bricks ready for a new project, although time and rain and lack of mortar conspire to prevent me from making a start till into next week. The photo is taken in the Rose Garden (see map, under The Garden tab) with the two main beds (containing Darcy Bussell and James L Austin) in the top left and bottom right of the picture, which until yesterday were edged in granite setts, recycled from a different part of the garden. The setts will be replaced with a brick edging, reflecting the new terraced beds either side of the bus shelter; the bricks in turn are recycled from two different neighbours and the setts are going back to the reclamation yard we bought them from 15 years ago, to be traded in for the ridge tiles needed for the recently refurbished shed. The downside of using two completely different  types of brick is balanced by the thrill of clearing the space they were stored in!

Still thinking of roses, I am pleased to see that at least 2 of the 3 rugosa roses moved from the Shrub Border into the Woodland Edge and what I will have to call ‘Under the Holly’ borders are coming into leaf. As with most plants displaced from their original homes here by the dissatisfied gardener, they were moved on a sink or swim basis but nevertheless I am more than happy that they are swimming although I would certainly have been  disappointed if the shrub roses I moved around the Shrub border had sunk. The Poet’s Wife and The Pilgrim, both taller than expected, were moved to the back of the border and Harlow Carr moved to the front; all are doing nicely thank you very much, as is Daphne mezereum which changed position three times as part of the same upheaval, putting paid to the commonly held belief that daphnes don’t like to be disturbed. Daphne and The Pilgrim are shown below, the former blowing out of focus in today’s gusty winds.

When trying to determine how to tackle the proposed terracing next to the bus shelter, I considered the option of slabbing them to display pots, and bought a few token slabs to assess the appearance. This was enough to confirm it wouldn’t work and, because you can never have too many, the terraced beds now contain more roses. The slabs have not been wasted and have been adapted to modify the step down to The Coop, the change in material eliminating the previous trip hazard. 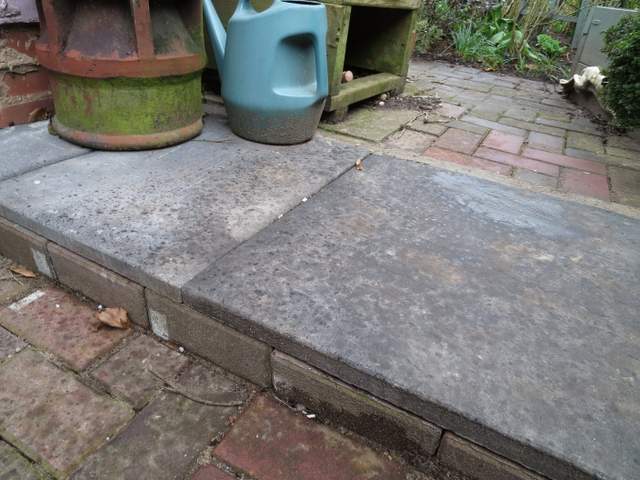 With so many practical projects having been undertaken in the garden since last summer there has been a lot of clearing up to do, especially of timber after replacement of the fruit cage and a number of fences. We don’t have a woodburner ourselves but I have wheeled six barrowfuls of timber round the corner to a neighbour in recent weeks and as the Golfer makes a valiant attempt to tidy his shed there will no doubt be a few more barrowloads to make the same journey.

In the working greenhouse (aka #2 and #4) the increasingly milder days and reduction in frosty nights has resulted in rapid growth for the Winter Sunshine sweet peas, some of which are approaching 2 feet tall. They were sown on 21st October and planted out in the greenhouse bed on 15th January; last year’s crop were sown on 2nd October and were coming into flower on 23rd April and I can reasonably expect to have flowers on this year’s crop by the end of April – gosh! that’s only just over a month away! This year I shared an order for these sweet peas with a neighbour so I could have more colours; I mixed my half share of seed but he has kept his separate. As this variety are specially bred to grow in lower light conditions and therefore flower earlier I am unsure whether collecting seed myself will result in plants true to form, but I shall give it a go at the end of their season.

Still in this greenhouse, I was pleased a week or so ago to see the first dahlia shoot appear although it is still the only sign of life so far from the dozen or so tubers saved from last year. They were lifted after the first frosts, brought into the house and cleaned and double-labelled before being individually wrapped in newspaper and stored in a box in a cool room until mid January, when they were potted up in compost recycled from pots and seedtrays. I have been in touch with Brian the dahlia enthusiast, my Mum’s island neighbour, who is going to provide me with a tuber from his much admired (by me) ‘Top Totty’, which has proved to be unobtainable anywhere else. It is good to be able to share gardening treasures like this, and passing on spare plants, cuttings and seedlings is perhaps the ultimate form of reducing, reusing and recycling for gardeners. 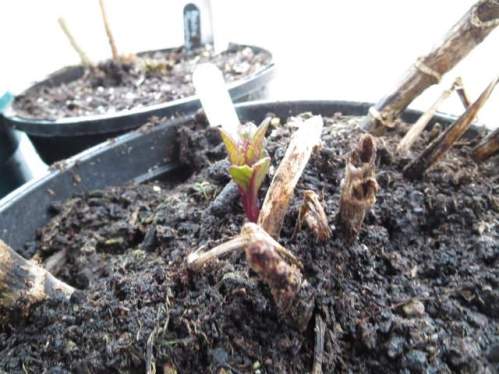 No time to write at any length? Not sure what happened there, but thank you to Jon for allowing me to link my not-concise-at-all post to his Six on Saturday meme.