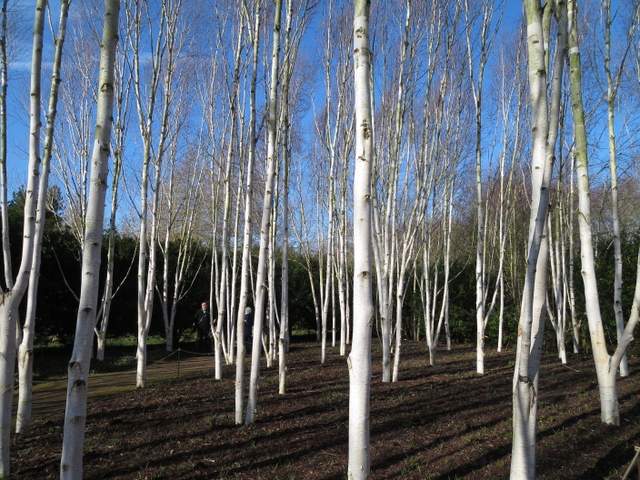 Realising after our Ireland visit year just how little we had used the campervan as a campervan last year, we decided to aim for at least a one night away most months. Over the winter that just didn’t happen, not because of the weather but because Life got in the way as it has a habit of doing. Even trying to find two ’empty’ days together is difficult at times, but we found a gap at the end of January and booked a campsite just outside Cambridge. As rumours of snow began circulating I kept an eye on the weather forecast and when heavy snow was forecast here on the day of our departure reluctantly cancelling became the sensible option. As it happened it didn’t snow here at all but it did in Cambridge and beyond, so it was a wise move.

Fortunately we were able to rebook about a fortnight later and headed off with an almost exclusively garden related itinerary (the Golfer is very amenable). Our first stop was Anglesey Abbey, and those of you have been there yourself will recognise those iconic birches shown above. Last time we went they had just planted a copse of new birches, in anticipation of the future demise of these beauties which have an expected life of about 25 years. We arrived early, soon after opening, but the place was already heaving and the car park was almost full – a combination of sunshine, Sunday, half term and, of course, snowdrops! Surprisingly neither the gardens nor the house seemed crowded once we were on site, but cars were queuing to get in when we left later in the day so it was as well we got there when we did. 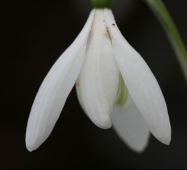 Anglesey Abbey is a Jacobean-style house with gardens and a working watermill, owned by the National Trust, but it is famed for its winter gardens and especially its snowdrops. Galanthus ‘Anglesey Abbey’ is just one of many snowdrops that originated here, a beautiful often all-white poculiform variety, where both inner and outer perianth segments tend to be of equal length.

There are more than 300 different varieties of snowdrops here, but most of the named varieties can only be seen on a specialist guided tour as, sadly, it would be too risky to allow the general public loose amongst them. These tours are only available on weekdays so we had to content ourselves with the rest of the winter garden and the snowdrops on general view. With a mild and extraordinarily sunny day it was a most pleasurable experience to wander round the gardens, admiring the swathes of snowdrops and exclaiming over the winter shrubs.

I was amused by this tactful and prominent sign which accompanied all the Daphne bholua ‘Jacqueline Postill’ shrubs within the garden: 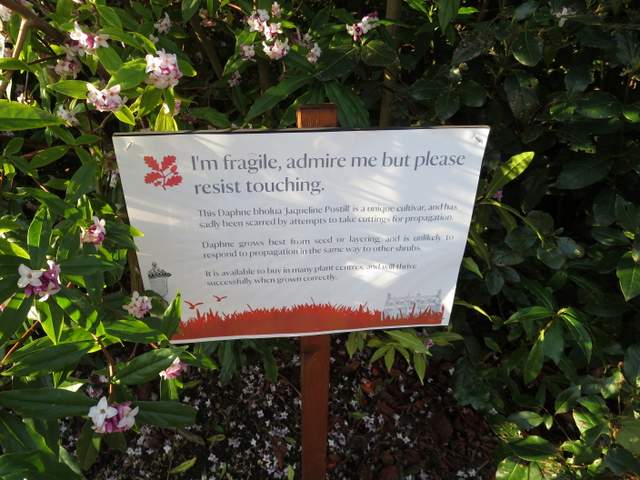 With its glorious scent and usually eyewatering price tag, the National Trust has clearly suffered from plant theft as thoughtless visitors try to bag themselves a bargain by snipping or breaking off Jacqueline’s limbs; hopefully potential thieves will now take note and not waste their time attempting to propagate it from cuttings.

Jacqueline’s fragrance was just one of many that assailed our senses, with various viburnum, sarcococca and daphne and Chimonanthus praecox adding to the olfactory cacophany, with foliage highlights of cornus and salix and evergreen grasses and the delicate colours of hellebores and striking ghostly white rubus punctuating the white of the snowdrops. All very lovely.

The Abbey was on the north side of Cambridge and headed south of the city after lunch to the Cambridge Botanical Gardens, also famed for its winter gardens. The pleasure here was more spread out, with swathes of grass between the different parts, as one would expect. What struck me here, even more so perhaps than at Anglesey Abbey, was how inclusive it was, with visitors of all ages, nationalities and abilities; many no doubt with no real interest in plants but enjoying the February sunshine and the relative peace away from the bustling city. People were here for picnics, relaxing, meeting friends and family, all within this calm oasis; even children playing and running and hiding did not detract from the mellowness. Perhaps even a half-conscious awareness of being surrounded by plants might have a lasting effect on the wellbeing of every visitor… 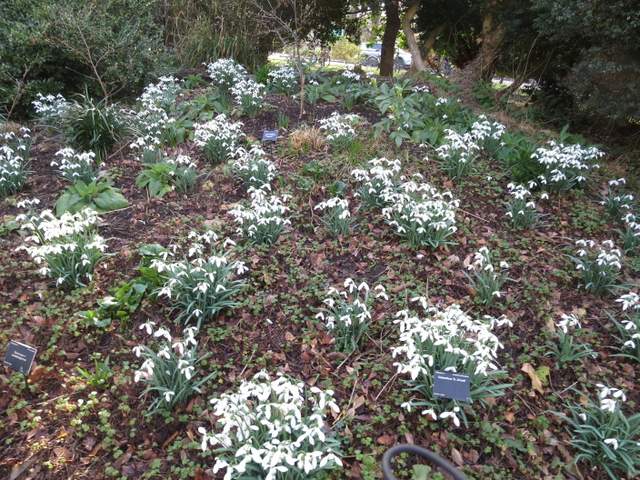 The winter garden contained many of the plants seen at Anglesey, but by concentring them in one area the effect was more marked. I was especially impressed with the combination of a very shapely Hamamalis ‘Jelena’, underplanted with the winter aconite eranthis and glowing leaves of libertia in the foreground. The witch hazel had finished flowering but one could easily visualise the whole montage glowing like hot coals, especially when the sun was shining as it was when we visited: 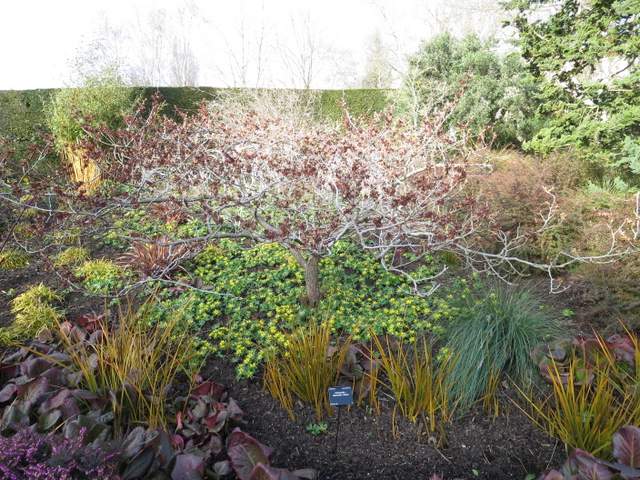 I was intrigued by the sign which gave visitors weather information, especially to learn that the ground temperature was only 1.7°C…food for thought. I do think, though, that the decimal point in the annual rainfall figuremust be in the wrong place!

A visit to the glasshouses was a must, and I enjoyed the immersive nature of many of the tropical zones:

I also took a lot of photos in the alpine house, picking up ideas for what might grow well in the Coop. I was especially intrigued by mounded plants of saxifraga which I don’t seem to have taken any photos of. 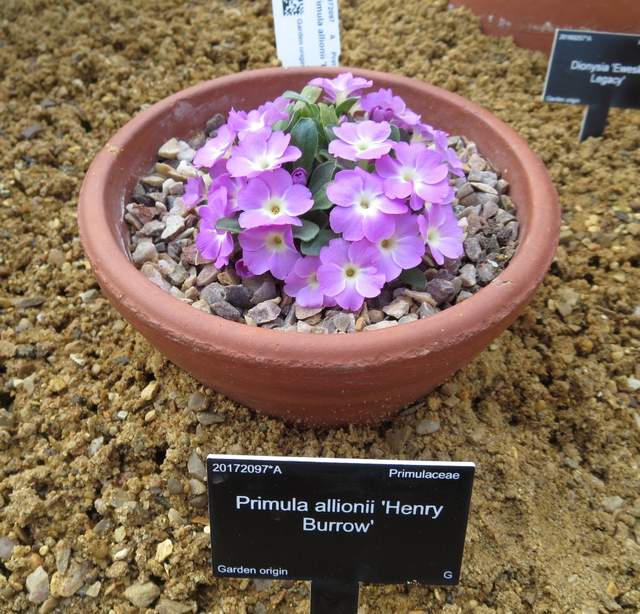 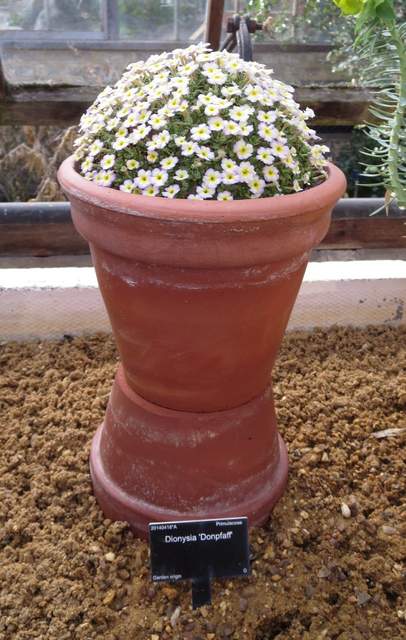 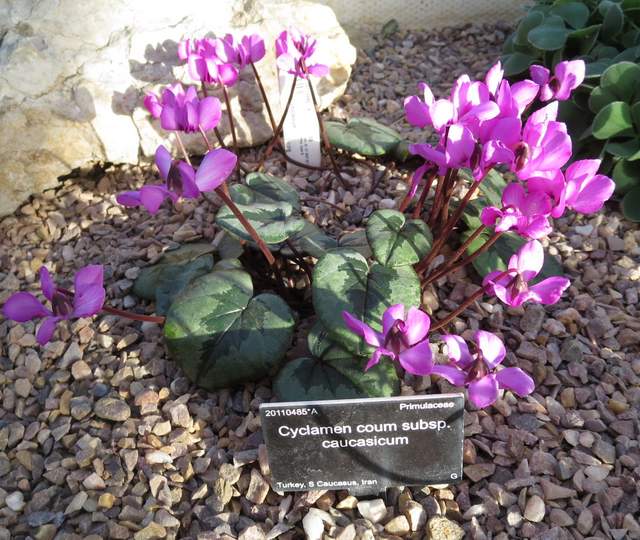 Worn out, we retired to our campsite for the rest of the day and had a good night’s sleep in preparation for the next exciting leg of our journey: visiting good blogging friend Chloris, about an hour’s journey further on in Suffolk.

I have visited Chloris before and after a further 4 years of online blogging acquaintance know each other even better, and I was SO excited to be meeting up again. For anyone who has never met any of their blogging friends in person I can highly recommend it, so do take advantage of any opportunity you get to do so. I think I must have met about 15+ blogging friends over the years and each time we have chatted amicably as if we have known each other for years, which of course in most cases we have, albeit online.

As well as meeting Chloris and Mr Chloris The Pianist again, it was a delight to see not only her very own winter garden, brimming with seasonal goodies, but aso to see for real all the changes she has wrought since we last visited. I did take a few photos of them in their winter guise (the changes, not Chloris and The Pianist) but she would not thank me for sharing them! Even in their seasonal decay (again, the changes..), it was still pleasing to see the scale and structure – especially her astonishing Exotic Garden, which I would love to see in its full glory in September. The vision required for its creation is to be greatly admired…

I can’t even show you a photo of her chocabloc greenhouse, crammed to the gunwales with winter colour, as that would spoil the post she has promised to write – so that’s that then…garden admired and enthused over, snowdrops swapped, yummy carrot cake eaten (yes, snowdrops and carrots), lots of pleasantries and information exchanged, it was time for a parting of the ways, one half to a literary afternoon, another to a four and a half hour journey to a more familiar garden. What a lot one can cram into a night away, and we saved the best till last…thank you Chloris and The Pianist.

20 Responses to Snowdrops and Carrots