In a Vase on Monday: the Old and the New

Last year I grew some ‘everlasting’ flower from seed for the first time: helichrysum, limonium (statice) and gomphrena. I hadn’t realised until they bloomed that gomphrena was a tactile everlasting flower too and although germination was patchy and I will be growing both it and the others again this year. I had no success, however, with helipterum which has a daisy type flower similar to helichrysum.

I was especially delighted with Helichrysum ‘Bright Rose’ which flowered continuously from June till well into the autumn, with buds remaining on a stray plant until after Christmas. These buds opened immediately they were brought into the house and placed in winter and have retained their shape well, unlike most of those in today’s vase – I learned early on that if they were picked when blooming was far advanced the centres would just disintegrate into a  mass of seeds, and these are probably in an in-between stage. Cutting them whilst still in bud seems to be the best way to go but I would welcome further advice. There was no such going-to-seed issue with the statice I have used, Limonium ‘Rose Light’ and L Purple Attraction’, but sadly L ‘Rat Tail Pink Poker’ did not thrive at all and there were no blooms.

The ‘new’ contents of the vase are stems of twisted hazel Corylus avellana ‘Contorta‘ with their fresh catkin tassels and the vase itself, although similar to last week’s Caithness Glass, is slimmer and with purple rather than pink detailing. The prop is a 2019 diary, in which I aim to record what I have been doing in the garden along with weather and details of what is emerging or blooming. It was a post from Joanna of Edinburgh Garden Diary that prompted me to start this; having been meaning for ages to record the first blooming of, for example, witch hazels and snowdrops, but never remembering until dates were forgotten, the start of a new year was a good time to get into the habit. I dithered over choosing a diary that felt ‘right’ and although happy with this one which is a week to view I am unsure as to whether I would rather have a page a day or even a 5 year diary like the one I see Avon Bulbs are offering; at least I have made a start, and it is not too late to change to one of these formats if I feel that is the preferable way forward for me.

The vase was photographed yesterday in the sitooterie – it was quite a grey day with a little light drizzle and temperatures not dropping below 10°C from morning till night, so the sitooterie was a dry and tolerably light location with an uncomplicated background. It would certainly have been too dark in the house itself and  I hope those of you posting a vase today can find a suitable location for your photographs. Pickings may be lean in the winter months in the northern hemisphere but there can be many options other than fresh blooms – so think creatively!  Please leave links to and from this post so that we can see what you have come up with. 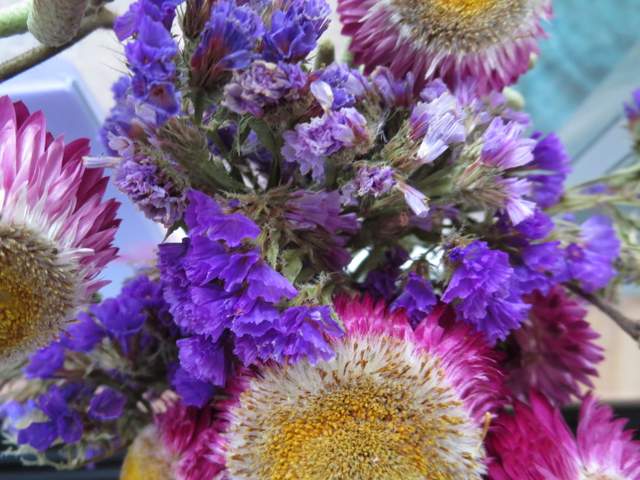 Like Loading...
This entry was posted in Gardening, Gardens, In a Vase on Monday, seed sowing and tagged everlasting flowers, flowers in a vase, garden record keeping. Bookmark the permalink.

52 Responses to In a Vase on Monday: the Old and the New