In a Vase on Monday: More Dreams

Some of you may remember me posting pictures last summer of some wonderful dahlias grown by a gentleman called Brian, who lives on the same island as my Mum – remembering the dahlias rather than anything else! I have referred to them a few times since too, trying to establish the names of some of I thought I would remember, but didn’t. He was so enthusiastic about sharing his pride and joy at the time that I knew he wouldn’t mind if I contacted him to ask some questions, but he is an elusive man who spends his time sailing and fishing when he is not tending his dahlias and greenhouses, and after several unsuccessful phonecalls I abandoned the attempt.

Well, here we are again, a year later, with more of Brian’s dahlias – but still no further contact with Brian! Today he was out fishing, but we were reliably informed by the two children skipping in and out of his house that he would be back soon so we planned to call in again later; on leaving the message that the lady (me!) who had admired his dahlias last year had visited hoping to ask him some questions, the young girl announced that she could answer them… And she did! At eight years old she reeled off the names of all the dahlias in Brian’s borders, names she had been given (we heard later) only once, and a fortnight ago at that! I realised later I hadn’t asked her if he kept the tubers in the ground all winter, but I am sure she would have been able to tell me although perhaps not yet about disbudding and other professional dahlia growers’ tips!

Such is island community life that she and her brother were neither relations of Brian, nor islanders, but the grandchildren of a second-home owner whom we met with the children’s mother while we were inspecting the dahlias. Brian is clearly a delightful and well-respected gentleman and there was nothing odd about the friendship that seemed to exist between the girl and her gardening guide; indeed it is a heartwarming thought that this friendship may prove to be the start of a liftime’s passion for gardening. He was certainly very generous with both his knowledge and his dahlias when we met him last year and such enthusiasm and generosity is infectious. 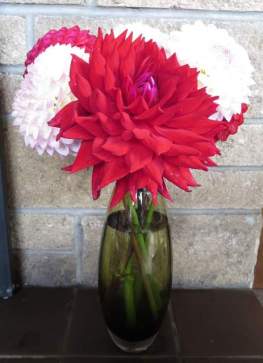 And the dahlias? Well, his generosity extends to his always leaving a bucket of blooms and any spare veg outside his house for whoever would like them – and yesterday that was me (we heard later that an elderly lady in the village invariably snaffles them all)! They are mostly dahlias I had last year and recognised – Brian’s Dream, Blyton Lady in Red and David Howard – but there was a fourth huge and spiky red one that was new to his protégé. I hadn’t realised quite how much bigger the latter was, and he certainly looks a little thuggish elbowing his more restrained friends out of the way in the vase – perhaps I should have cut him shorter to keep him under control? David Howard was safely out of the way in his own vase, a Caithness Glass bud vase in the original ‘Peat’ colourway; the larger vase, also used last year, is Caithness Glass in ‘Moss’.

Aren’t they wonderful – and the SIZE of them…well, goodness gracious me! Blyton Lady in Red is one of the dahlias I added to the garden this year after seeing Brian’s last time, but the singular bloom on mine is a mere fraction of the size of his! I suspect there must a lot of cutting out of side shoots or whatever to get blooms such as this but, after all, he is a professional and I have a lot to learn – so let’s hope I learn as quickly as young Arya. Sadly, as he lives at the other end of the island from my Mum there will probably not be another opportunity to catch him at home on this visit.

In the meantime I shall savour these dahlias and the photos of them – and the names of the others that Arya reminded me of and which I made sure I wrote down. You, however, will just have to make do with this post and the photos because IAVOM will have to run itself this week with me being away for a few days. As usual I will try to read your comments and posts but am unlikely to have the time to reply or comment on your vases (although if there are any questions I will do my best). Please still leave links to this post and links back to your own in comments on this one as usual, and enjoy your own Monday blooms!

Like Loading...
This entry was posted in bulbs, corms and tubers, Gardening, Gardens, In a Vase on Monday, Visiting gardens & days out and tagged dahlias, flowers in a vase. Bookmark the permalink.

28 Responses to In a Vase on Monday: More Dreams