After a couple of months of heat, blue skies and no rain we have finally had a day of welcome coolness, grey skies and RAIN! Yesterday felt damp and there was a little rain, but it was warm and there were still bursts of sunshine – but today seemed like the end of an era, a very hot and dry one, and I am heartily relieved. More than half an inch of rain has half-filled all the water butts and thoroughly refreshed the garden as well as the gardener. Hurrah indeed! The fact that the forecast is for more warm and dry weeks  after this short period of unsettled weather does not seem relevant at the moment, such is the joy of the rain.

It is too early to say what effect these dry weeks will have had on the garden. On the whole, the main borders despite only occasional watering seem not to have suffered much, with only a few plants showing signs of stress; their response to the rain has been instantaneous relief and gratitude. Primroses in the woodland and most things in the woodland edge border, however, which the variable tree canopy ensures are relatively dry areas, look unhappy and will take longer to be revived, if at all. Persicaria ‘Red Dragon’ perked up quickly, but the adjacent rhododendrons are definitely sulking and next year will possibly reward me with limited or no blooms. 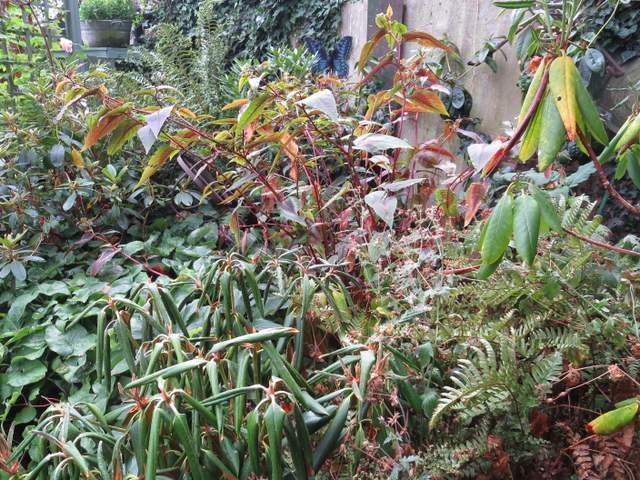 Under the crown-lifted holly, however, three small rhododendrons which were moved here after that work was done look surprisingly happier already, despite the exceedingly poor, dry and neglected soil below:

Hydrangea arborescens ‘Annabelle’ in the hedge border, another very dry spot, was also instantly revived but her flower power has suffered:

Although it is the woodier plants that have shown the most sign of discomfort, none of the witch hazels seem to have been adversely effected and all already have signs of this coming winter’s blooms, an indicator I became aware of only in the last year or two and I assume that the buds had formed before the drought set in. Interestingly, most of them are also smothered in seed pods, unlike previous years when there may only have been a handful on each plant, presumably an indicator of the number of pollinating insects that were around when they were in bloom last winter. The photo below shows Hamamelis vernalis ‘Amethyst’: 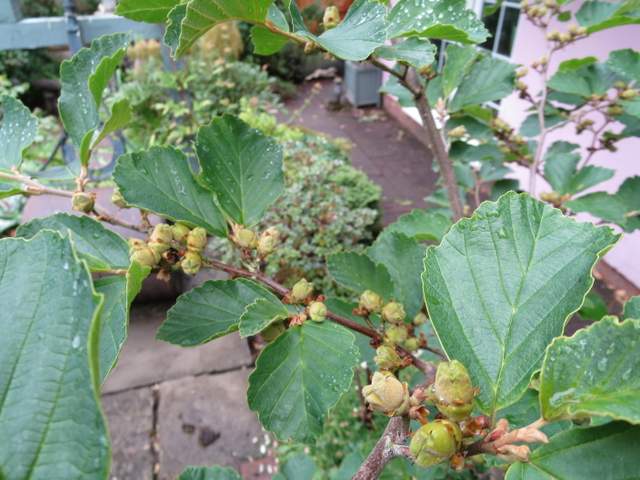 In the fruit cage the soft fruit has continued to thrive on semi-neglect, with raspberries and loganberries producing their usual good crops (apart from one end of the raspberry row where the fruits were tiny) and a bumper blackberry crop pending: 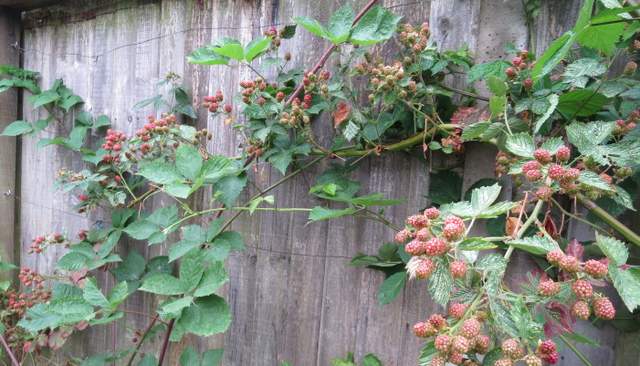 The same is true of rhubarb and courgettes with their astonishingly healthy foliage but the climbing French beans at the end of the bed needed more attention. Just think what crops could be had if I paid as much attention to these edibles as I do to the decorative plants in the garden!

With a visit to my Mum’s planned soon, I had grouped pots together as much as I could to keep them in the shade as well as make it easier for our neighbour when it came to watering, but in the circumstances it may only be the tomatoes in the greenhouse that will need attention after all! The first group are all pots that had been popped into the borders as they were, rather than face an uncertain future being planted  into dry ground, and are a mixture of dahlias I had potted on myself, seed sown grasses and new additions bought for extra colour to boost the garden for our group openings – and I was a little taken aback to see just how many there were! The second group is outside the back door, some bought last weekend from a specialist plant fair and some left over from our plant sales, waiting to be potted on for another year. At least they are all well watered now!

Despite putting other tasks on hold I couldn’t wait any longer and did begin sowing seeds again a couple of weeks ago (all perennials), tucking them under the staging in the greenhouse to keep them out of direct sun, but had put off pricking them out because of the heat and need for regular watering – so this welcome change in the weather means I can get on with that, as well as beginning to take cuttings which I have also been itching to start. It seems too long since there were seedlings and cuttings to nurture!

With weather more conducive to gardening once more, thoughts turn also to bigger tasks like revamping and decluttering the borders, as well as structural tasks that were hinted at recently. The ‘mockery’ has already proved its worth, the rough structure making it easier to visualise a 3D design, with the final outcome being none of the three alternatives considered, but a simpler one excluding a section down the side of the sitooterie. Not yet complete, it still needs some vertical inserts and a couple of coats of paint; needless to say, I will not be complaining that it is too wet to paint!

18 Responses to At Last Hurrah!